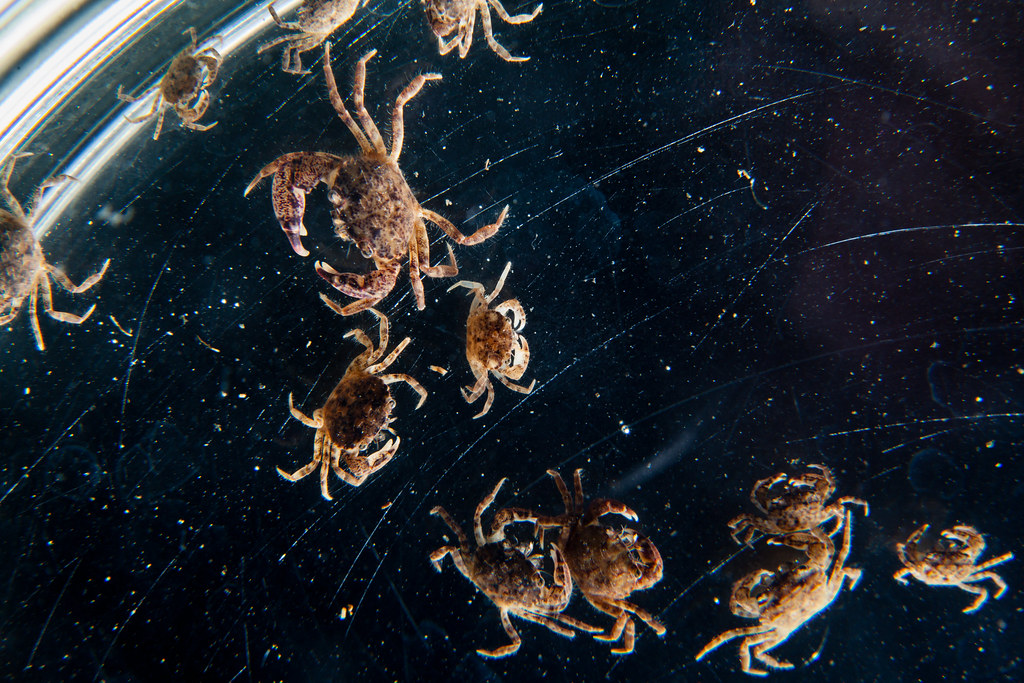 Black-fingered mud crabs from a sampling site in Louisiana rest in the lab of Biodiversity Genomics Postdoctoral Fellow Carolyn Tepolt at the Smithsonian Environmental Research Center in Edgewater, Md., on Oct. 15, 2015. (Photo by Will Parson/Chesapeake Bay Program)

Also known as the Atlantic mud crab, the black-fingered mud crab is muddy brown in color with stout, black-tipped claws. It can be found on oyster reefs and along the muddy bottoms of marshes.

Black-fingered mud crabs are muddy brown in color, with stout, black-tipped claws that are unequal in size. A large tooth on the finger of its larger claw is visible when the claw is clamped shut. Its four pairs of walking legs are hairy and slender. These crabs grow to reach three-quarters of an inch wide and one and a half inches long.

Mud crabs use their strong claws to crack the shells of oysters, barnacles and marsh periwinkles, and can also be found feeding on worms, fish and other crabs.

Mud crabs reach sexual maturity between 18 and 24 months of age. Females carry fertilized eggs on abdomen until they hatch. Larvae hatch with undeveloped limbs and float through the water like plankton. Larvae molt four times over the course of 12 to 15 days before developing fully functional claws. A few weeks later, the so-called “megalopa” will settle into the sea floor and molt into a juvenile crab.