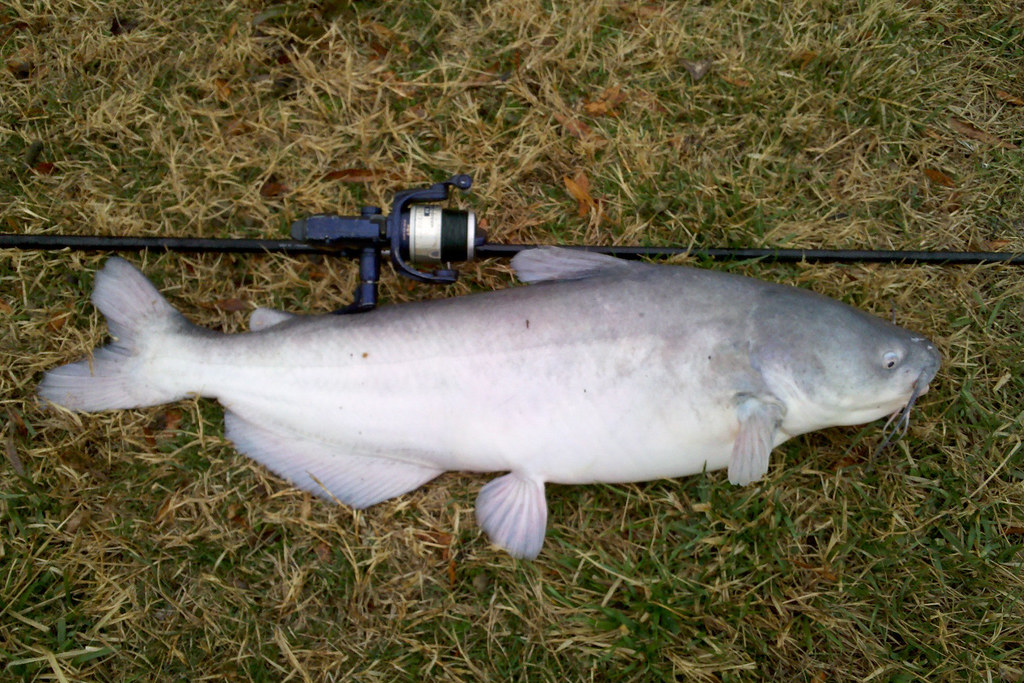 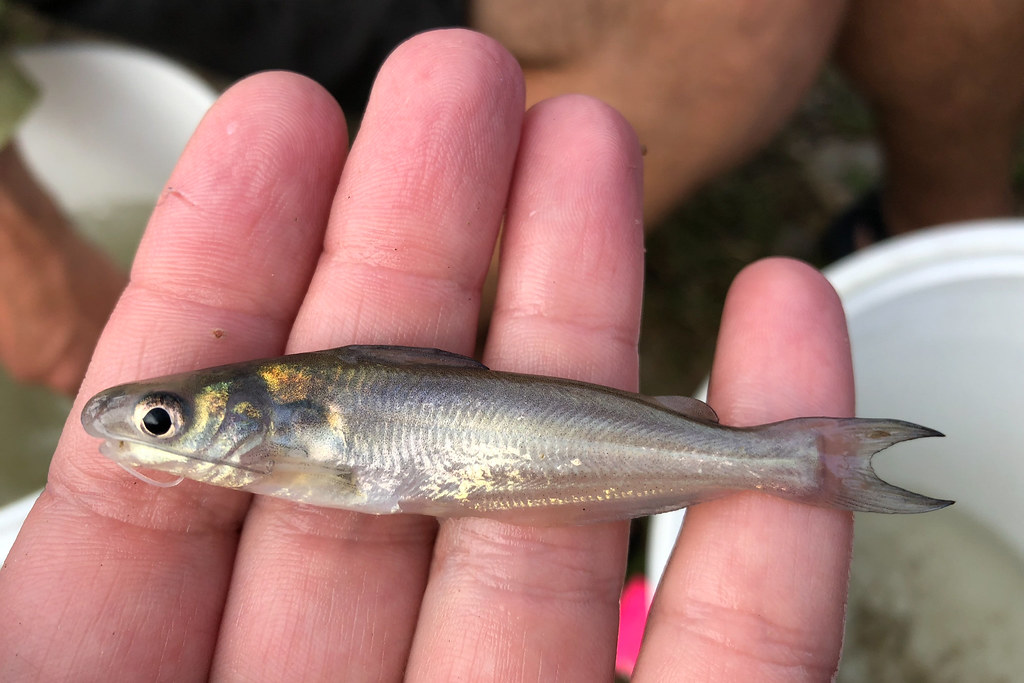 Blue catfish caught by waterman Rocky Rice are emptied from fish pots on Rice's boat on the Potomac River in Charles County, Md., on Sept. 20, 2017. Rice can catch up to 1,200 pounds of blue catfish, an invasive species. Rice has increased the time he spends catching them—three days a week—as market demand has increased. (Photo by Will Parson/Chesapeake Bay Program) Chef Michael Stavlas of Hellas restaurant in Millersville, Md., prepares blue catfish, the subject of a "catch and cook" effort to fight the invasive species, at a press event attended by officials from the Chesapeake Bay Program and Maryland Department of Natural Resources at Smallwood State Park in Marbury, Md., on April 10, 2014. As "apex predators" blue catfish consume other finfish as well as shellfish, and the invasive species has spread from the James River into other parts of the Bay. (Photo by Jenna Valente/Chesapeake Bay Program) 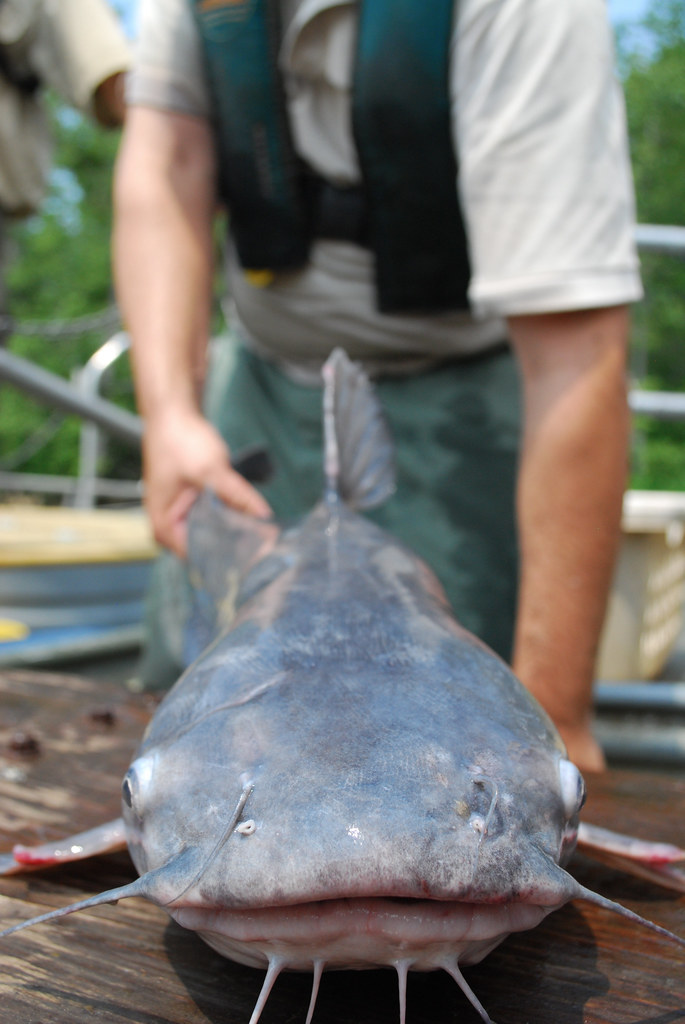 A team led by fisheries biologist Bob Greenlee of the Virginia Department of Game and Inland Fisheries use electrofishing to monitor blue catfish in the James River on June 6, 2011. Blue catfish are an invasive species that have dramatically increased and spread in the James River and surrounding region. "The populations [of blue catfish] still have not reached equilibrium," Greenlee said. (Photo by Matt Rath/Chesapeake Bay Program)

The blue catfish is a large, smooth-skinned fish with a slate blue body and whisker-like barbels around its mouth. It was introduced to the region in the 1970s, and is now considered an invasive species.

The blue catfish is a long fish with a flat dorsal fin and deeply forked tail. Its smooth skin lacks scales. It has a slate blue body, a silver-white belly and four pairs of black, whisker-like barbels around its mouth. Adults usually grow to be less than two feet long, but can be as long as five feet and weigh more than 100 pounds.

Blue catfish are nocturnal. During the day, they stay near the bottom of deep, restrictive waters. At night, they swim to faster flowing waters to hunt for food. However, their diet varies seasonally, and in spring, summer and fall, a large portion of the blue catfish’s diet is made up of underwater vegetation.

Blue catfish have the ability to “taste” their surroundings with sensory tissues on their barbels and skin, which they use to detect and hunt prey. To avoid predation, young blue catfish will often hunt at night, feeding primarily on zooplankton and small aquatic insects.

While adult blue catfish have few natural predators in the Chesapeake Bay watershed, they are among the preferred prey of both osprey and bald eagles.

When attacked, blue catfish defend themselves with serrated spinal barbs located on both their dorsal and pectoral fins. The spines have glands that expel harmful toxins, which can enter predators’ wounds and cause sharp pain.

Spawning occurs once per year between April and June, often in lower-salinity streams and smaller tributaries. Blue catfish mate with only one partner per reproductive cycle. Male blue catfish build nests in dark, protected areas, such as under rocks or in submerged logs and man-made containers. When preparing their nesting sites, males use their tails to sweep aside debris and use their jaws to remove larger objects. Their nests range from six to 14 inches in diameter.

Once they have prepared the nest’s foundation, males release pheromones that attract females to the nest. Males and females then court by swimming in elaborate patterns. Blue catfish reproduce at a rapid rate, with females producing 4,000 to 8,000 eggs per kilogram of body weight. Once the eggs have been fertilized, male blue catfish often force females away from the nest to organize and protect the eggs.

Young often form tight schools after hatching. While both parents assist in raising the young, male catfish often act as the primary caretaker. Blue catfish live nine to 10 years on average, though some have been known to live up to 25 years.