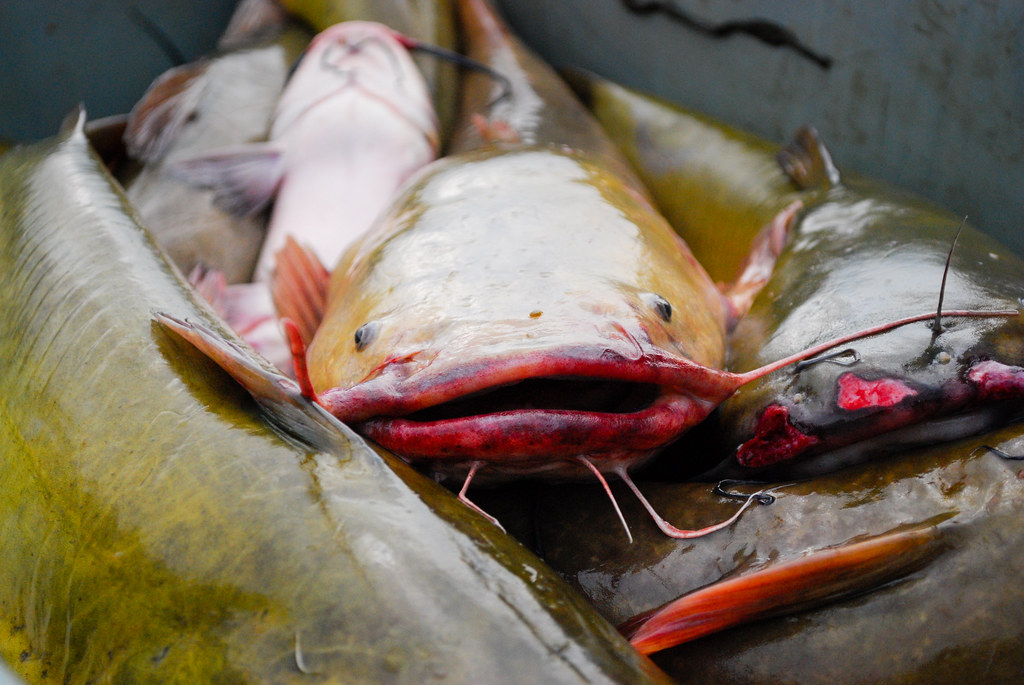 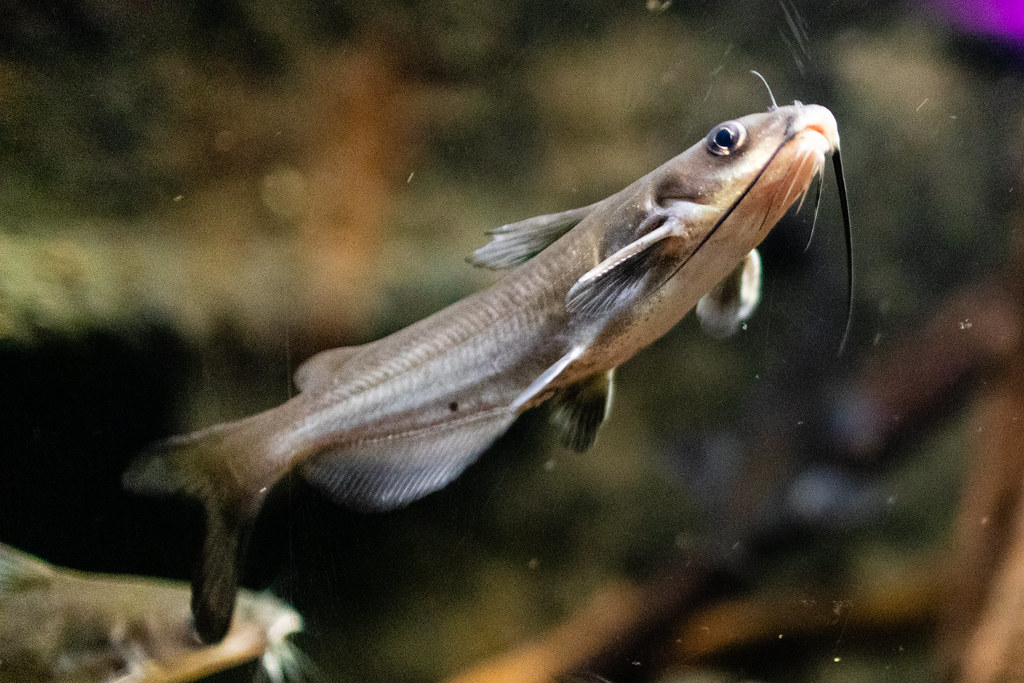 A channel catfish (Ictalurus punctatus) swims at the Virginia Living Museum in Newport News, Va., on Dec. 30, 2018. (Photo by Will Parson/Chesapeake Bay Program)

The channel catfish is a large, smooth-skinned fish with a bluish- or greenish-gray body and whisker-like barbels around the mouth. (Ryan Somma/Flickr) The channel catfish is a large, smooth-skinned fish with a bluish- or greenish-gray body and whisker-like barbels around the mouth. (U.S. Fish and Wildlife Service)

The channel catfish is a large, smooth-skinned fish with a bluish or greenish-gray body and whisker-like barbels around the mouth. It lives in fresh and brackish rivers throughout the Chesapeake Bay watershed.

The channel catfish usually grows to about two feet in length, but can be as long as four feet and weigh more than 50 pounds. It is smooth-skinned, with a bluish- or greenish-gray body, a silvery white belly and olive fins.

Small, dark spots are scattered across its sides; these spots may disappear as the catfish gets older. Four pairs of light, whisker-like barbels appear around its mouth. Its tail fin is deeply forked.

Channel catfish are bottom-feeders and eat a wide variety of foods, including insects, mollusks, crustaceans, snails, snakes, fish and small birds. Younger channel catfish are more omnivorous, eating a balanced variety of plants and small animals. Taste buds located throughout their body allow these fish to “taste” their surroundings with their skin, helping them to effectively detect and hunt nearby prey.

Larger fish may prey upon adults and young. Young are eaten by fish-eating birds in the Bay watershed, such as bald eagles and osprey. Channel catfish eggs are also an easy source of food for many animals.

The channel catfish’s dark skin helps camouflage it in the bottom of clear rivers. When attacked, channel catfish can defend themselves with spines located on both their dorsal and pectoral fins.

Spawning occurs from late May through July, once water temperatures reach 75 degrees Fahrenheit. Channel catfish move upstream to spawn. Couples are usually monogamous and undergo an extensive courtship that begins earlier in the year. The parents build a nest in a dark, protected area such as under a rock or inside a hollow, submerged log.

The female lays between 2,000 to 21,000 pea-sized eggs, which the male guards. The eggs hatch in seven to 10 days. The young catfish form schools after hatching, which the father leads and guards. The juveniles take between two days and two weeks to become fully independent. Channel catfish typically live between 14 and 16 years, but some have been known to live as long as 40 years