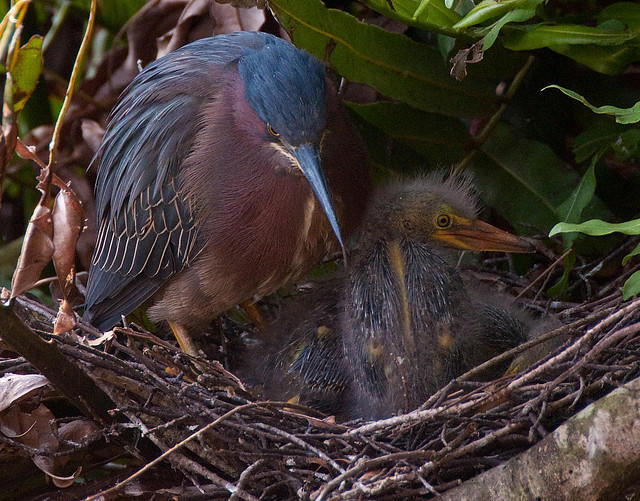 Down-covered green heron young stay in the nest until they are able to fly, about 30 days after hatching. (Kathy & Sam/Flickr) Green herons stalk their prey by silently standing at the edge of the water with their neck folded back on their shoulders. (e_monk/Flickr) 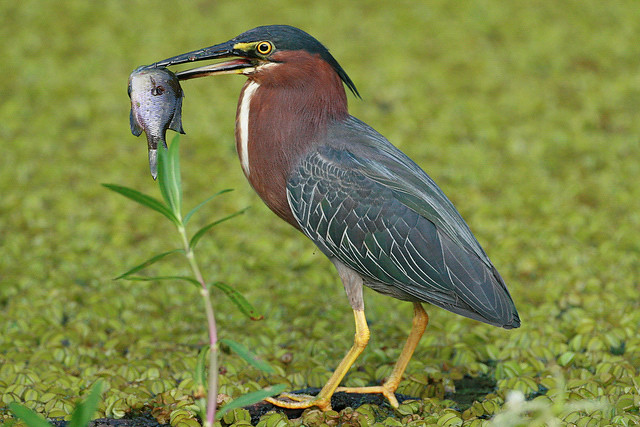 Green herons quickly lunge into the water and grab or stab their prey with their spear-like bill. (Jack Wolf/Flickr) 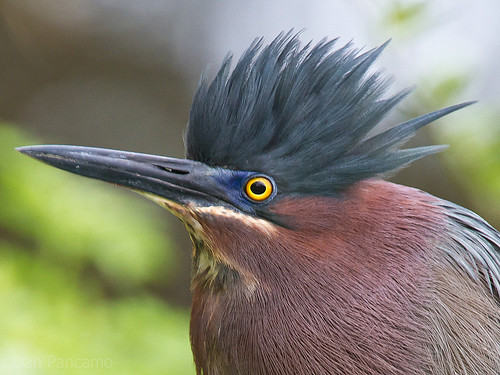 The green heron is a small, crow-like wading bird with a chestnut neck and grayish-green back. It visits the Chesapeake Bay region’s marshes and wetlands from spring through autumn.

The green heron's small, crow-like body grows to about 18 inches in length with a 26 inch wingspan. Its head and neck are a reddish or chestnut color, its underparts are brownish-gray, and it has a glossy, greenish-black cap that is sometimes raised in a shaggy crest.

White and black streaks appear on its chin, throat and upper breast. Its back and wings are grayish-green, and the wing feathers are edged in buff. It has a pointed, spear-like bill that is yellow at the base and brownish-black at the tip. Its legs and feet are usually yellow, although the male's legs will turn orange during breeding season.

The green heron eats mostly fish and invertebrates, but will also feed on frogs, snakes and amphibians. It stalks its prey by silently standing at the edge of the water with its neck folded back on its shoulders, then quickly lunging into the water and grabbing or stabbing its prey with its spear-like bill. It is one of the few birds that will use bait to attract prey, sometimes dropping twigs, bread or insects onto the water to lure fish to the surface.

The green heron resembles a crow when flying. It flies with slow, steady wingbeats, often holding its chestnut neck in a bunched, S-shaped position in flight.

This bird is very vocal; its calls include a series of kucks or a loud kyow, skow or skuck.

Green herons are considered semi-colonial because they may create a nest alone or in a colony with other herons. The birds usually begin arriving at breeding areas in early April. During courtship, the male extends his neck feathers and swells his throat in a sharp call, then hops from one foot to the other in front of a female.

The birds will nests in shrubs and small trees, as well as on duck blinds. Females lay 3 to 6 eggs twice per year, and both parents incubate the eggs for about 23 days. Young stay in the nest until they are able to fly, about 30 days after hatching.

Most green herons depart their breeding areas from mid-July to mid-October. Green herons may live up to eight years.