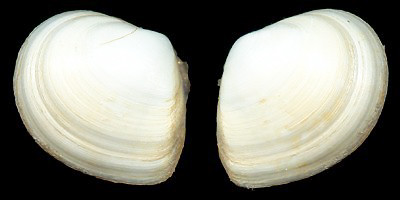 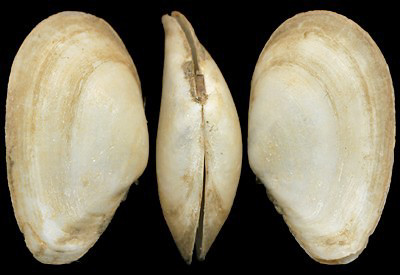 The narrowed macoma clam’s shells are more elongated than the Baltic macoma’s. They also have a smooth, pearly sheen. The shells’ narrowed posterior end is slightly twisted to the left. (www.idscaro.net)

Macoma clams are tiny bivalves with thin, chalky white shells. They live buried in the sand or mud in the shallow waters of the middle and lower Chesapeake Bay.

Two species of macoma clams can be found in the Chesapeake Bay:

Macoma clams have thin, fragile shells. They have two long, thin, flexible siphons (one of which is longer than the other) that can be pulled completely inside their shells. They also have a hatchet-shaped foot. The Baltic macoma clam has broad, oval-shaped shells, sometimes with a pinkish tint.

While buried in the sand, the clam’s two siphons stick up above the surface. The longer siphon sucks in tiny bits of food lying on the Bay’s bottom. It can also draw in water and filter out plankton. Waste and unused water are ejected through the other siphon.

Macoma clams’ long siphons look like worms crawling along the bottom. They attract many predators, including American eels.

Macoma clams release eggs and sperm into the water column. After being fertilized, eggs develop into larvae with two tiny, transparent shells and a small foot. Larvae float in the currents for a few weeks before eventually settling to the bottom. To avoid being tossed around by waves, larvae anchor themselves to sand grains using thin threads secreted from a gland on their foot.