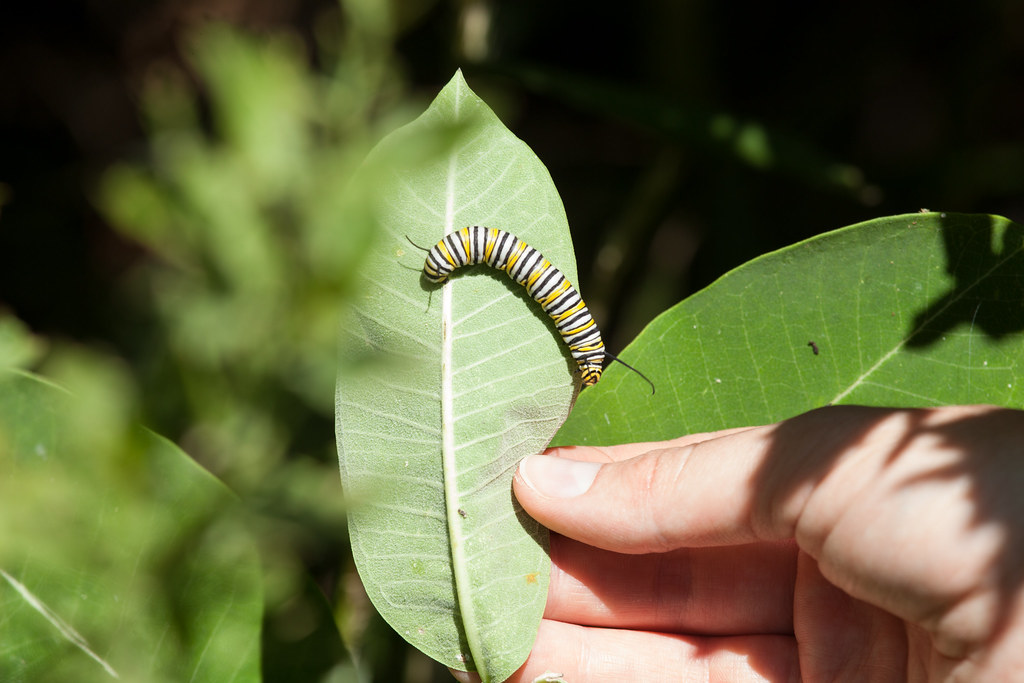 Monarch caterpillars feed only on species of milkweed, such as common milkweed. Above, a monarch butterfly caterpillar feeds on common milkweed on Poplar Island in Talbot County, on Maryland's Eastern Shore on Aug. 18, 2016. (Photo by Will Parson/Chesapeake Bay Program) 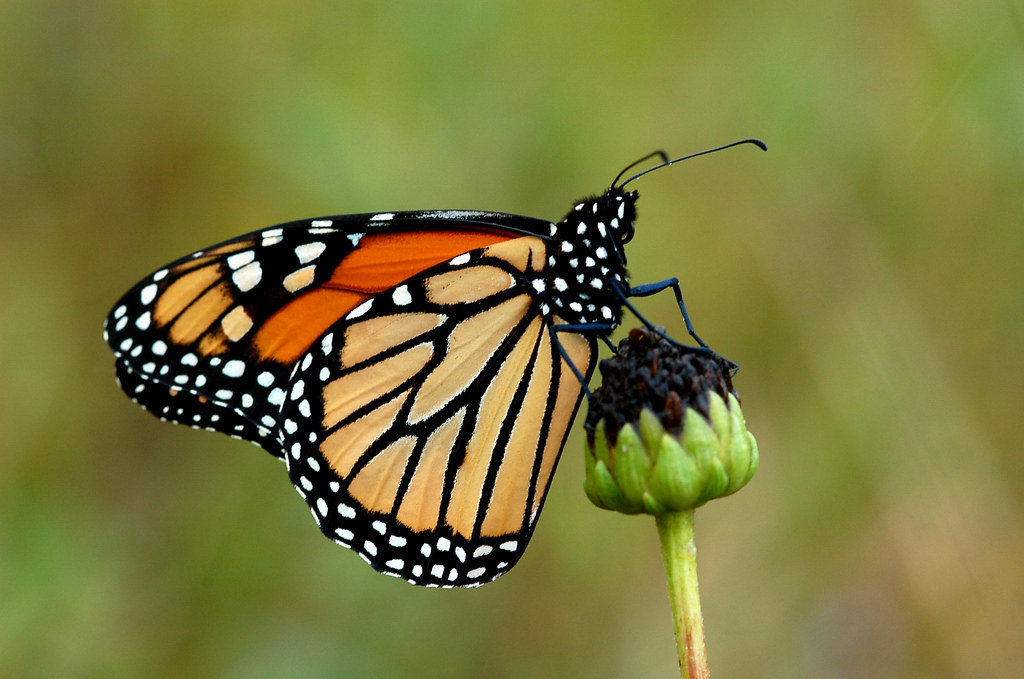 The monarch butterfly's bright orange wings are interlaced with black veins and surrounded by a wide, black border marked with white spots. (squamatologist/Flickr) 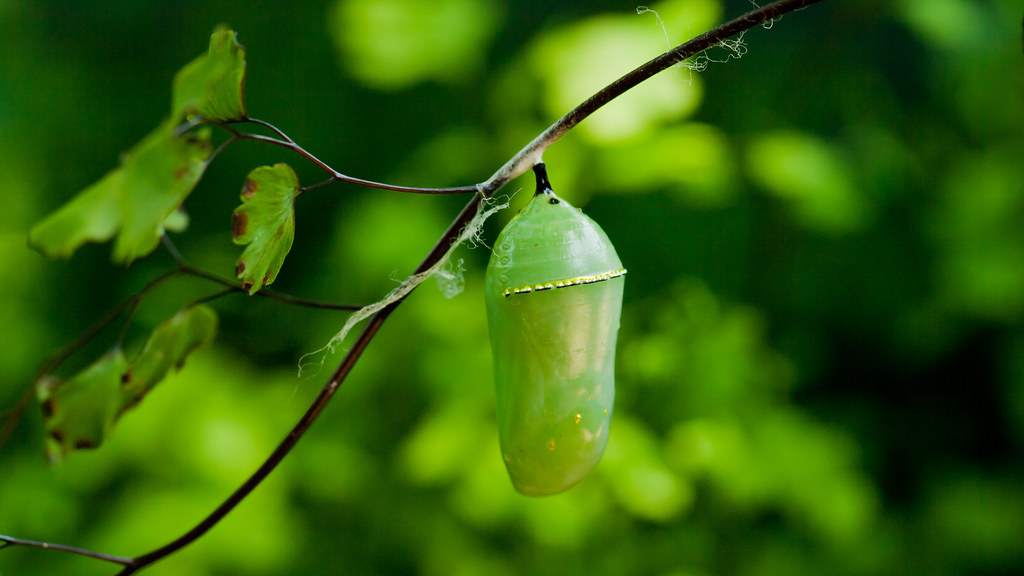 Monarch caterpillars must form a chrysalis around themselves before undergoing metamorphosis, or changing from a caterpillar into a butterfly. (Cletus Lee/Flickr) 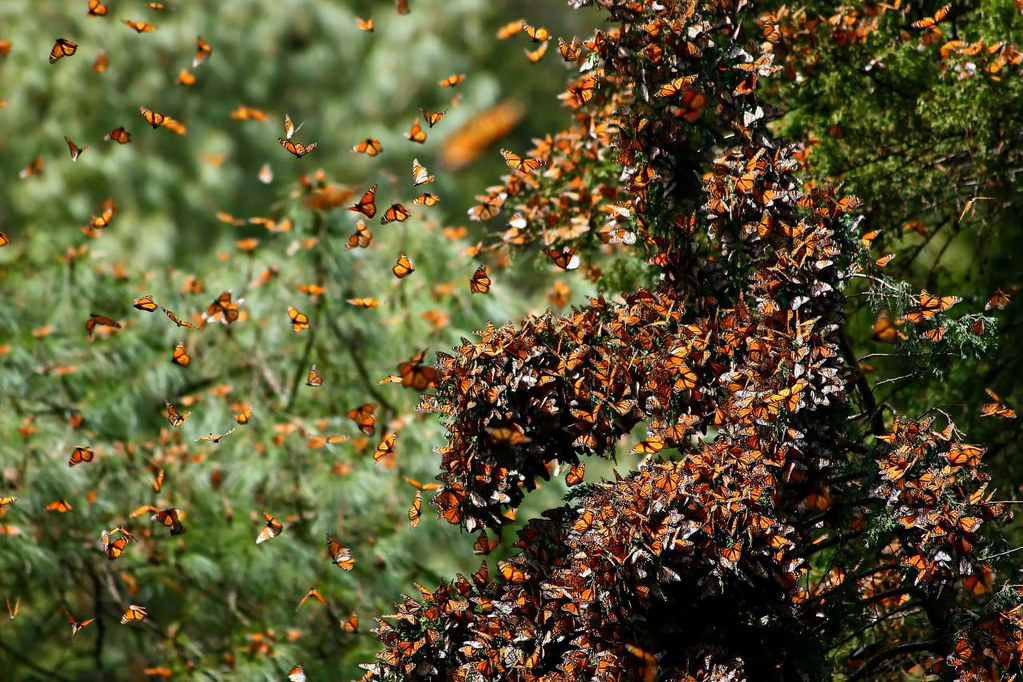 The monarch butterfly is known for its bright orange and black wings, which signal to potential predators that the species is poisonous.

Adult monarch butterflies have wingspan of about four inches. Their bright orange upperwings are interlaced with black veins and surrounded by a wide, black border marked with white spots. The undersurface of their wings are colored a duller orange to camouflage the species against tree bark. Males are slightly larger than females, and they have a black spot on each hind wing. Monarch caterpillars have black, white and yellow bands over body with a pair of long black filaments near head and a pair of shorter filaments near rear.

The bright coloring of adults warns potential predators the species is poisonous, thanks to the accumulation in their bodies of toxic chemicals produced by milkweed plants. However, caterpillars are preyed upon by some invertebrates, like wasps and ants.

Monarch mating occurs throughout summer and once again in spring, before adult butterflies migrate from their overwintering sites. During courtship, the male pursues and nudges the female in the air before taking her down to the ground to mate. Females lay small eggs on milkweed "host plants," often on the underside of leaves. Once hatched, caterpillar eats almost constantly over a nine-day to two-week period, shedding its skin several times before forming a chrysalis around itself and transforming from into a butterfly. The lime-green chrysalis is marked with gold spots and a black, horizontal band edged with gold.  Most monarch butterflies live for 5 weeks, except for the generation born at the end of summer. These butterflies will live up to 8 months as they fly back to their wintering grounds in Central and South America, where they stay until the following spring.