A raccoon resides at the Virginia Living Museum in Newport News, Va., on March 9, 2016. (Photo by Will Parson/Chesapeake Bay Program) 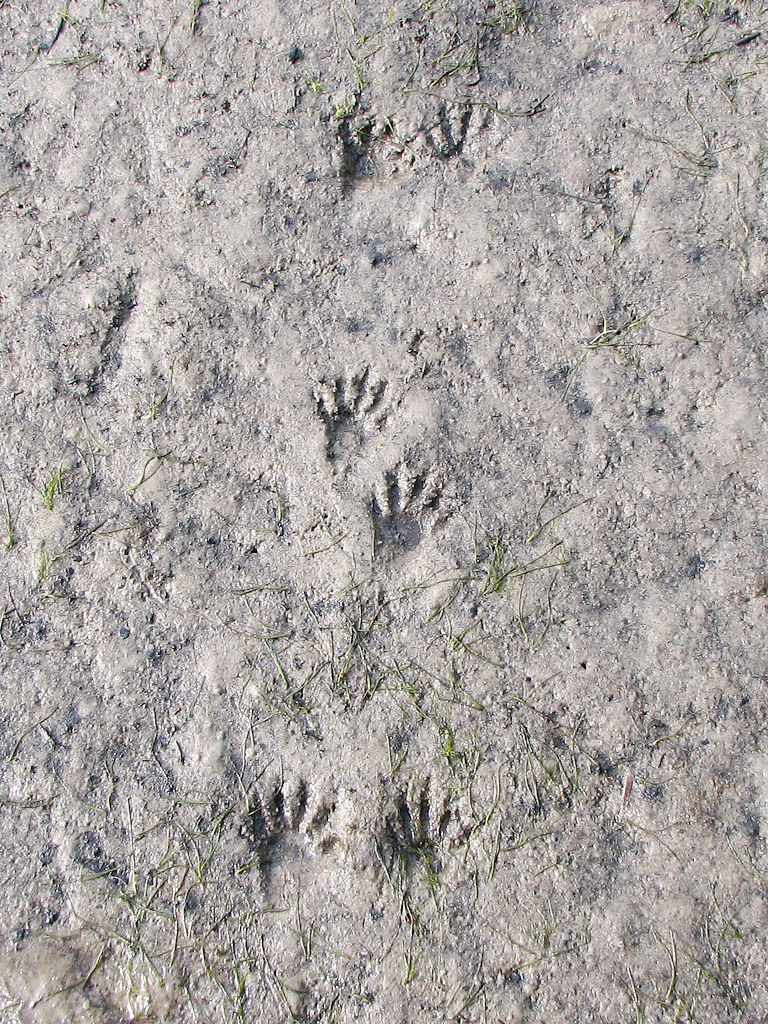 A raccoon's five-toed tracks in the mud. (Gabriel Kamener/Flickr) 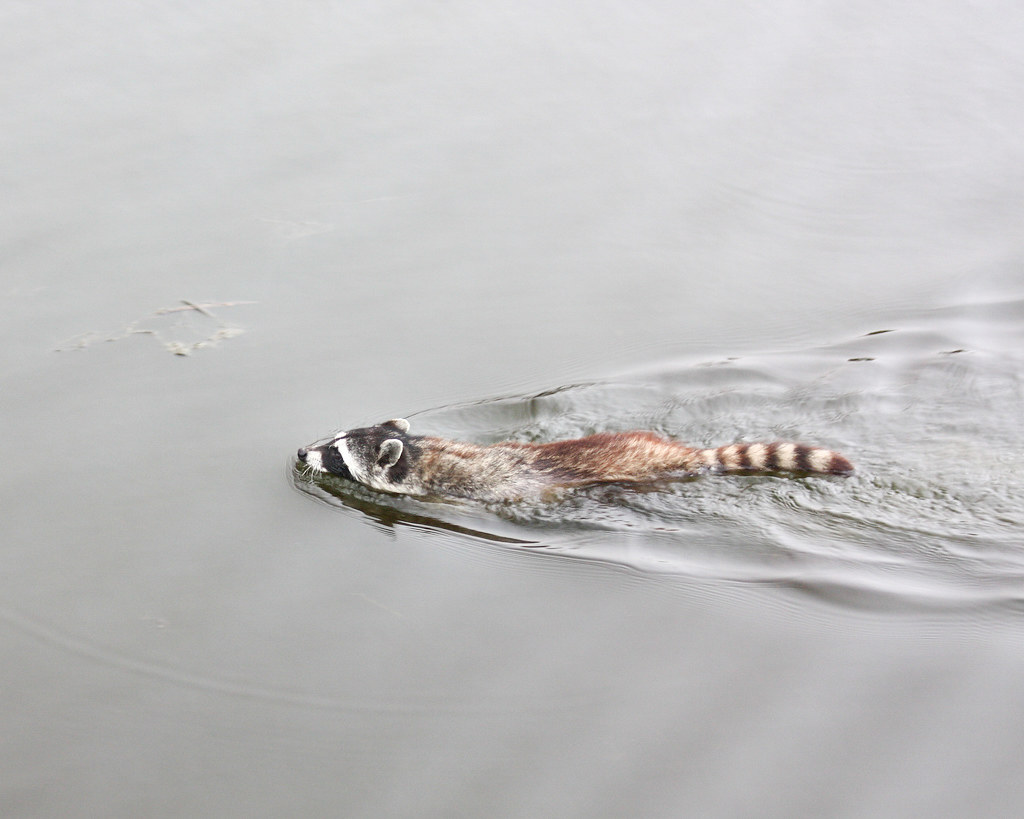 Raccoons are strong swimmers, but they do not swim farther than they need because their fur is not waterproof and being wet weighs them down. (Sandy and Chuck Harris/Flickr) 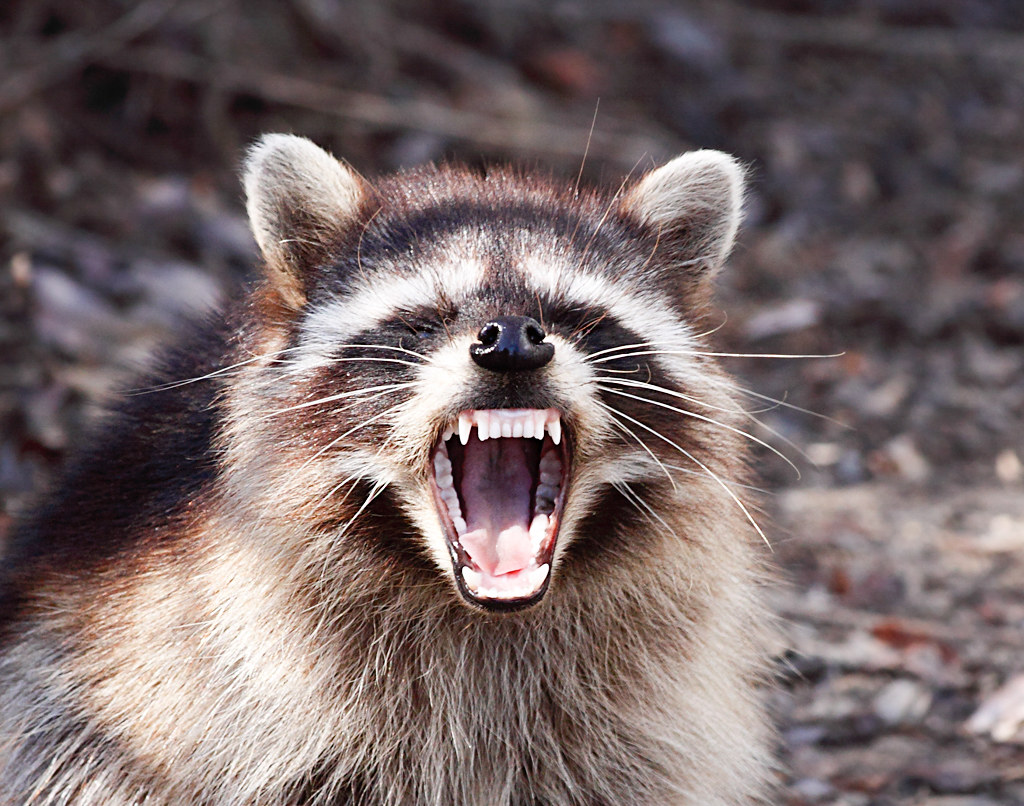 Raccoons can be aggressive toward potential predators. (Alan Vernon/Flickr) 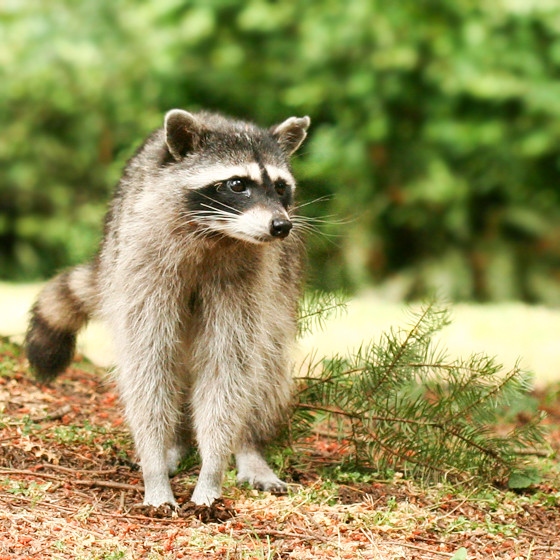 Raccoons are grayish mammals with a distinctive long, ringed tail and black “mask” over the eyes. ( Lynette S./Flickr) 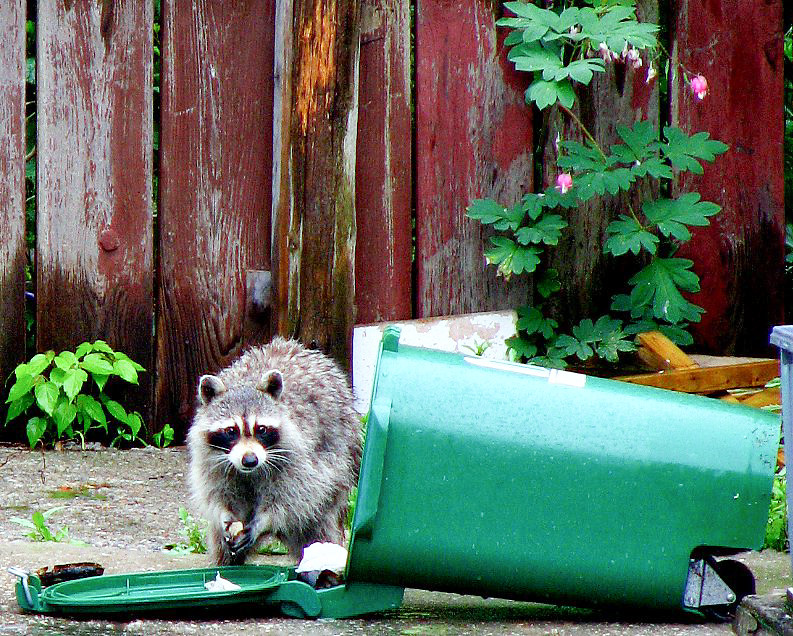 Raccoons are able to use their hands with great skill to open garbage cans and other containers in search of food. (Alexa Clark/Flickr)

The raccoon is a grayish mammal with a distinctive long, ringed tail and black “mask” over its eyes. It lives in nearly every part of the Chesapeake Bay watershed, from cities and suburbs to swamps and marshes.

Raccoons are mostly gray with some reddish or black tints and gray underparts. They have a distinctive black mask around their eyes. Their long tail has rings of black and yellowish-white. They have small, erect ears and a pointed muzzle. Their black feet have five toes on each paw. Raccoons grow to about 28 inches in length and can weigh as much as 35 pounds.

Raccoons eat nearly any available food, including fruits, nuts, corn, fish, frogs, insects, bird eggs, rodents and dead animals. In cities and suburbs, raccoons will eat food they find on the ground and sometimes break into trash cans. Raccoons are able to use their hands to open garbage cans and other containers in search of food.

Hawks, owls and humans are major predators. Snakes may eat young raccoons. A raccoon will stay in its den during the day to avoid being preyed upon, and can be aggressive toward potential predators.

Raccoons are very vocal mammals and use a variety of sounds to communicate with another. There are up to 200 different sounds raccoons use to interact. Adult raccoons will purr, chitter, growl, snarl, hiss, whimper and screech. Each sound is used to communicate something different. But, they’re not easy to distinguish from other wild animals. Many of their vocalizations resemble those of other animals. Fighting raccoons sound similar to fighting cats. Raccoon screams sound like the screech of an owl.

Breeding occurs from late autumn into early spring. The raccoon creates a den in a dry area, often in hollow trees, logs or crevices. Gestation lasts about two months. In late winter or early spring, the female gives birth to a litter of three to six young (called cubs). At birth, cubs are blind, covered in dark fur and have no rings on their tails. Between 18 to 24 days old, cubs begin to open their eyes. After four to six weeks, cubs begin walking, and after nine to 10 weeks, they begin to explore outside of their den. Females nurse their cubs for about 70 days. After four to five months, cubs are able to forage on their own. Females continue to care for their cubs for nearly one year. Cubs do not reach adult size until their second year. Females can breed before they are one year old. Raccoons can live 10 to 15 years in the wild.