A flock of American coots visits Spa Creek at Annapolis City Marina in Annapolis, Md., on Feb. 19, 2016. Coots feed mainly on underwater grasses and despite their duck-like appearance, are actually a species of rail. (Photo by Will Parson/Chesapeake Bay Program) 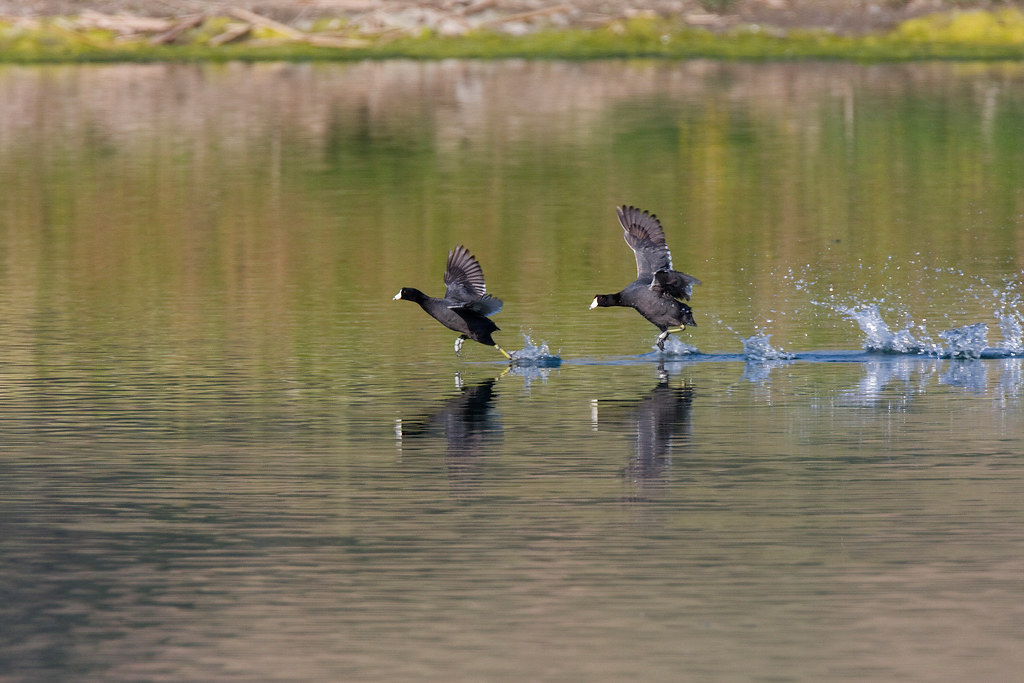 Coots can feed by either diving for their food in deeper waters or “tipping up” their tail and submerging their head underwater in shallow waters. (Jerry Oldenettel/Flickr)

The American coot is a dark, duck-like bird with a white bill. It visits the Chesapeake Bay and its rivers, creeks and wetlands from autumn through spring.

The American coot grows to 16 inches in length. It has red eyes, a white, chicken-like bill with black on the tip and a red area on its forehead. It has a dark, grayish-black body with white patches under its small tail. Its legs are greenish or yellowish, and it has large feet with lobed toes.

The coot feeds mostly on underwater grasses such as redhead grass, sago pondweed and wild celery. They will also eat small fish, insects and invertebrates. An American coot feeds by diving for food in deeper waters or “tipping up” its tail and submerging its head underwater in shallow waters. Coots are also known to steal food from nearby birds.

When threatened, the coot will splash in the water to scare away nearby predators. The adult coot’s most common predators are typically large birds of prey such as ospreys and bald eagles. However, eggs and young coots (called “nestlings”) are vulnerable to a variety of smaller predators, including raccoons, skunks and snapping turtles.

The American coot has a plump body and short wings, which means it can have some difficulty taking flight. The coot is much more suited to life in the water, where its lobed toes allow it to swim with ease. However, in open waters and with enough time to prepare, a coot can fly without any problems.

The coot makes short croaks, clucks and cackles that sound like kuk-kuk-kuk. It will make these sounds for a variety of reasons, such as to attract potential mates and ward off predators.

The American coot does not breed in the Bay region. Its migratory pattern means that when it is time for the coot to mate between May and June, it usually breeds in the midwestern and western United States and southern Canada. Males and females attract each other by calling out to one another while splashing around in the water. After mating, both the male and the female work together to build a nest, preferably on the edge of a pond. The nest will often include a ramp leading straight into the water, providing young coots with an easy way in and out of the nest. The female will usually lay eight to 10 eggs at a time. The eggs are noticeably pink with brown speckles and will incubate for around three weeks before hatching. The male and female coot work together to raise their young, teaching them to dive and fly. By the time the coot is two months old, it is completely independent. The American coot has a lifespan of up to nine years.