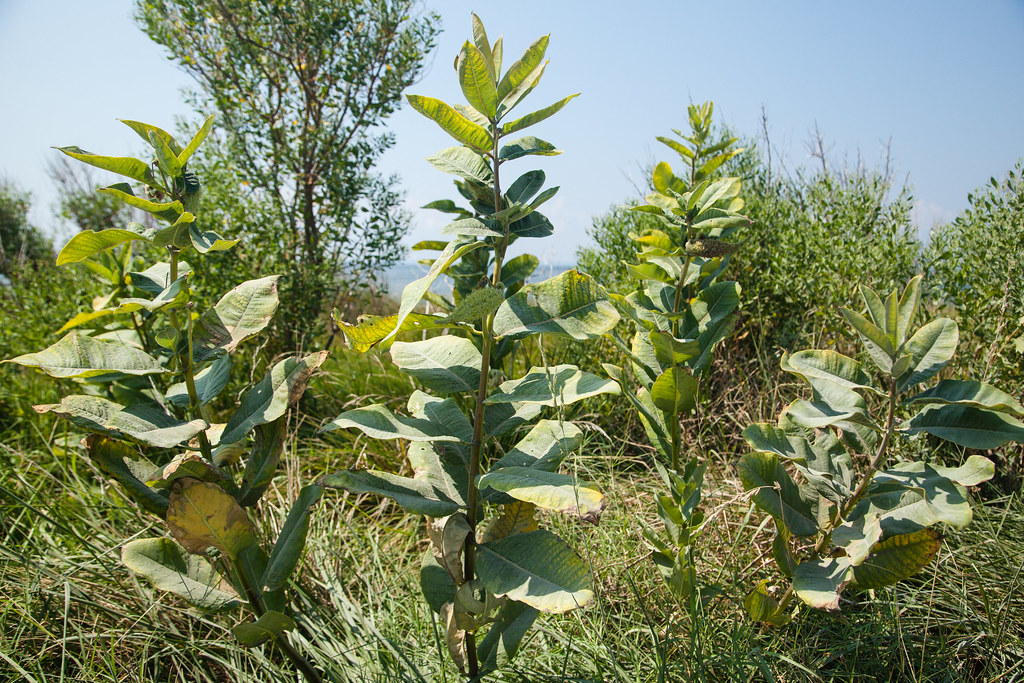 Patty Parsley of the Living Classrooms Foundation holds a common milkweed seed pod at Masonville Cove Environmental Education Center in Baltimore, Md., on March 23, 2016. When milkweed pods open in fall and early winter, hair-covered seeds are released and carried by the wind. (Photo by Will Parson/Chesapeake Bay Program)

A monarch butterfly feeds on the nectar of a common milkweed plant at Chino Farms in Queen Anne's County, Md., on July 15, 2016. (Photo by Will Parson/Chesapeake Bay Program)

Common milkweed plants grow at Chino Farms in Queen Anne's County, Md., on June 20, 2016. Common milkweed is a perennial plant that grows up to four to six feet tall and blooms in early to mid-spring. (Photo by Will Parson/Chesapeake Bay Program)

Common milkweed is a native pollinator plant that is the host plant for the monarch butterfly and source of food for many other insects.

Common milkweed plants have tall stalks with sets of oblong leaves growing in perpendicular pairs from the base of the stalk to the top. The leaves tend to be darker on top and lighter on the bottom. Milkweed plants often grow in clusters with multiple stems on each plant. In summer, the plant forms spherical umbels of light purple or pink flowers. Each umbel normally has about 30 flowers, but they can have as many as 100.

Over 450 species of insects use milkweed plants as a food source. To defend itself, milkweed species contain the compound cardiac glycosides, which makes the plant toxic in large quantities. Some insects have adapted to use this to their advantage by evolving to eat the toxic plant, which then makes the insect toxic and protects them from predators. Common milkweed, which is most often found in the Chesapeake reginon, has far less cardiac glycosides than southern species, but birds and other predators will still avoid monarch caterpillars in northern regions.

The four-inch-long seed pods develop in late summer. They are green when they first start growing and eventually harden into a light brown. Each seed pod is filled with 50-100 seeds. Each seed is attached to silk-like strings that carry the seeds in the wind.

● There are about 115 species of milkweed plants in the Americas.
● The name “Ascelpia” is a reference to the Greek god of medicine, Asklepios.
● Milkweed was historically used to treat different medical issues, such as skin ailments and lung conditions.
● Monarch butterflies evolved to exclusively feed on milkweed as caterpillars.