Morrow's honeysuckle thrives in the edges of forests, parks, fields, roadsides and other areas that have been disturbed by human activities. (Photo courtesy of ctracey/Flickr) 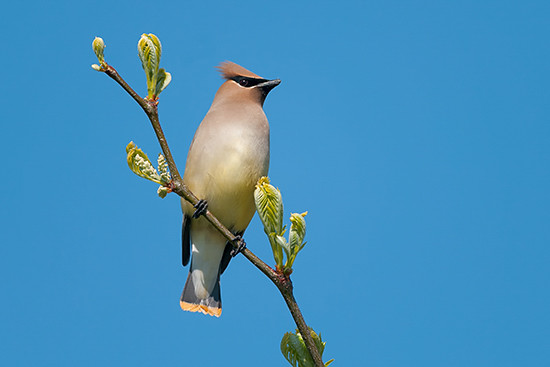 Scientists believe that an increasing number of cedar waxwings with orange tail tips can be attributed to the birds eating Morrow's honeysuckle berries, which contain a red pigment that combines with the bird's natural yellow tail to produce an orange color. (Image by Paul Reeves Photography/Shutterstock)

Morrow's honeysuckle thrives in the edges of forests, parks, fields, roadsides and other areas that have been disturbed by human activities. (Image courtesy Qwert1234/Wikimedia Commons)

Morrow’s honeysuckle is an invasive deciduous shrub with white, tube-shaped flowers and small, bright red and orange berries. It can be found throughout the Chesapeake Bay watershed.

Morrow’s honeysuckle is a deciduous shrub that sits upright and averages seven feet tall. It has oblong, opposite leaves of 1 to 2 inches in length that grow on short stalks. It has white, tubular, 5-petaled flowers and red- or orange-colored berries.

Birds and small mammals feed on the fruit of Morrow’s honeysuckle, which is poisonous to humans. The fruit, though abundant and carbohydrate-rich, do not offer the same source of high-fat, nutrient-rich food to migrating birds that native plant species do.

Morrow’s honeysuckle leafs comparatively early in the spring, and is often one of the first shrubs with foliage. Flowers bloom from late April through early May, and berries mature in July and last through the winter. Seeds are spread by birds that eat the fruit.