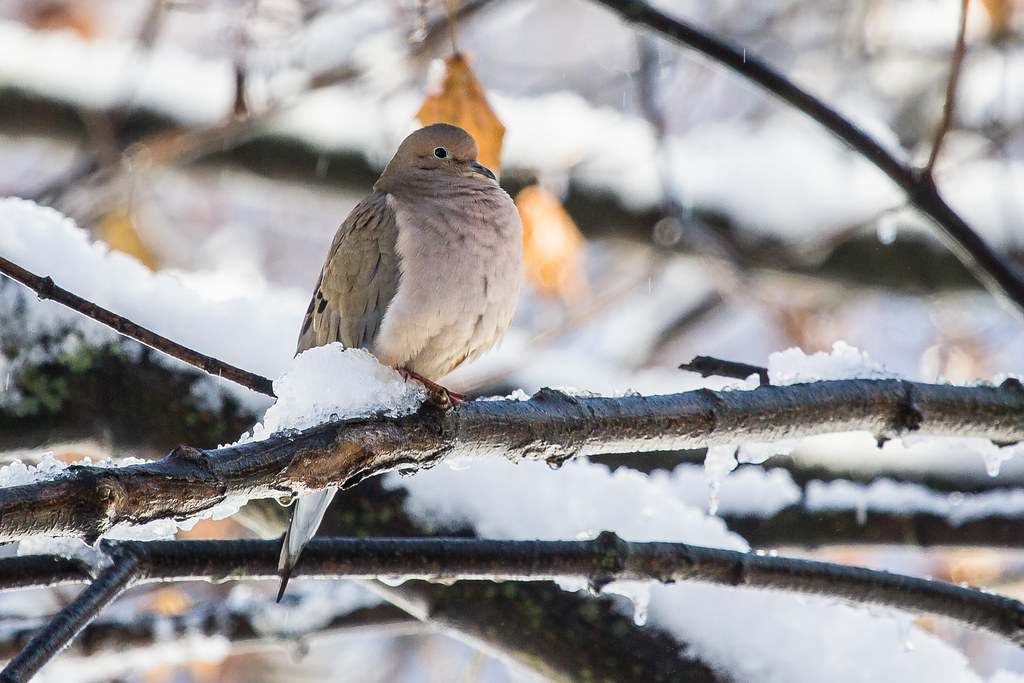 A mourning dove perches in a tree on Dec. 15, 2013. (Photo by Steve Droter/Chesapeake Bay Program)

The grey-brown dove with a sorrowful call is one of the most common birds in North America.

Mourning doves are grey-brown birds with. Pale pink and green iridescent patches on the neck and chest. They have pale blue markings around their eyes, and a black spot under each eye. Their head, neck and chest are light brown, and their wings are darker grey with black spots. They have a long pointed tail that is dark on top and white underneath. Males and females look alike but males tend to be slightly brighter in color.

Mourning doves are ground feeders that mainly eat seeds. They use a pouch in their throat known as a “crop” to store food until they can find a safe place to sit and digest their food. Mourning doves will eat up to 20% of their body weight each day.

Mourning doves can fly at speeds of up to 55 miles per hour. They have long pointed wings and tails. Their wings make a whistling sound when they take off and land.

They get their name from the mournful-sounding call they make during the mating season.

Each spring males search for a mate for the season. They will land on the ground near a female and bow their heads and sing their courting song. When the female has accepted a mate the pair will sit on a nearby branch and preen each other’s feathers. The male will select several potential nesting sites and the female will decide which one they use. Nests are usually in a shrub or tree between 40 and 100 feet in the air. The male will collect the nesting materials and the female will build the nest.

Mourning dove pairs can raise up to six broods per year. They almost always lay two eggs per brood. Both parents take turns caring for their young. For the first few days after hatching they feed their young “pigeon milk,” which is partially digested seeds from their crop. Within a week of hatching, the parents will feed their young seeds and within two weeks the young leave the nest. The young will stay near the nest for another two weeks and their parents will continue to feed them.