Arrow arum has thick, arrowhead-shaped leaves with prominent veins down the middle and along the edge. Above, arrow arum grows in Kingman Marsh on the Anacostia River in Washington, D.C., on Sept. 30, 2019. (Photo by Will Parson/Chesapeake Bay Program) 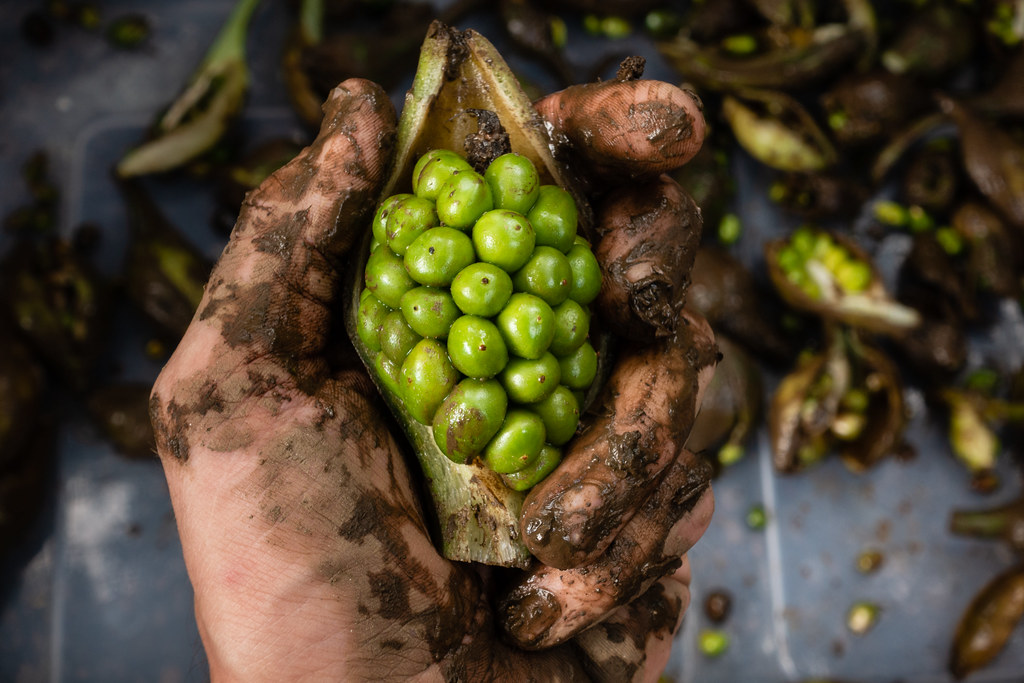 After blooming, arrow arum flower spikes mature into dark, drooping pods full of large, green seeds.. Above, staff and volunteers from the Anacostia Watershed Society harvest seeds from the wetland plant arrow arum on the Anacostia River in Bladensburg, Md., on Sept. 22, 2018. (Photo by Will Parson/Chesapeake Bay Program) For noncommercial use contact the Chesapeake Bay Program

Naturalist Emily Cope demonstrates how the seeds of the wetland plant arrow arum use stickiness to adhere to submerged soils in order to germinate at Patuxent River Park in Prince George's County, Md., on Nov. 24, 2017. (Photo by Will Parson/Chesapeake Bay Program)

Arrow arum is a native perennial plant with large, arrowhead-shaped leaves. It grows in shallow, tidal fresh waters throughout the Chesapeake Bay region.

Arrow arum has long, thick, arrowhead-shaped leaves with prominent veins down the middle and along the edge. The leaves can be up to 18 inches in length and nearly 6 inches wide. Leaves grow from the top of stalks, which grow from a thick rootstock that is embedded in the mud. A white flower spike contained in a green sheath blooms in May to July. Arrow arum grows to 3 feet tall.