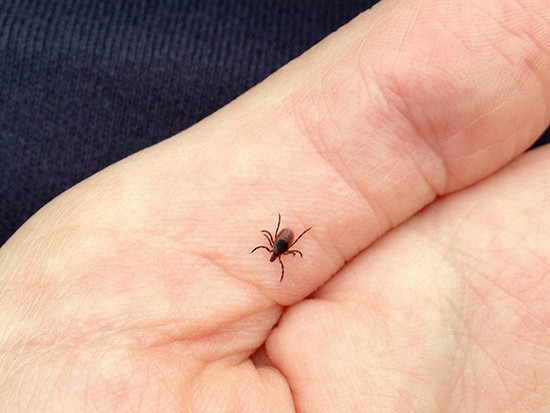 Adult female deer ticks will feed on humans in spring and summer before they lay their eggs, though their preferred host is the white-tailed deer. (Fritz Flohr Reynolds/Flickr) 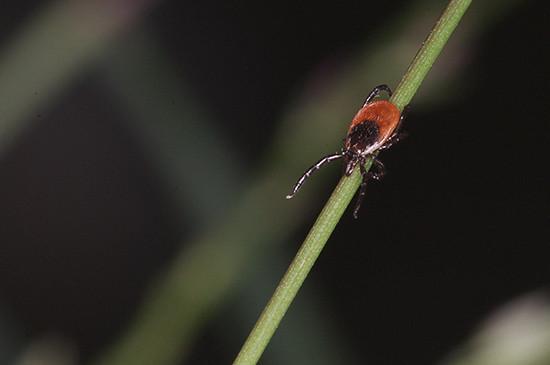 Ticks such as the deer tick are not insects. They are arachnids, relatives of spiders. (Armed Forces Pest Management Board/Flickr) 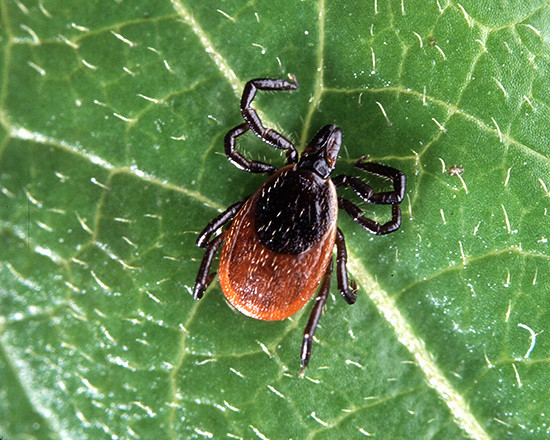 The deer tick—named for its preferred host, the white-tailed deer—can carry and transmit to humans the bacteria that causes Lyme disease. Ticks are most active in late spring and summer.

The deer tick, sometimes known as the black-legged tick, is a small, dark brown and black colored tick that usually only reaches 3 millimeters in size in adulthood. Deer ticks have eight dark legs, a dark head and a dark spot behind their head, called a dorsal shield. These characteristics can be used to identify deer ticks at multiple stages of their life cycle.

A deer tick’s abdomen will look different depending on its age, sex and whether it has recently eaten. Distinct from other life stages, larval ticks—which are not much bigger than the period at the end of this sentence—are three legged and have translucent abdomens. Nymphs are slightly larger, about the size of a poppy seed, and have dark brown bodies. Adult females have reddish-brown abdomens, while males have brownish-black abdomens. At all these life stages, feeding changes the color and size of the tick’s abdomen, which can become shades of yellow to dark bluish-grey.

Because of their small size, deer ticks are rarely found or eaten by potential predators such as birds.

In late fall and over winter, adult male and female deer ticks meet on their preferred host, the white-tailed deer, and mate. Females will drop from their host and remain active throughout winter, while males will usually die shortly after mating. Once spring arrives, female deer ticks will lay hundreds of eggs. These eggs develop into larva that will then seek out a host to feed on.

In summer, larva will attach to white-footed mice or small birds to feed for a few days. Then, larva will overwinter, waiting until spring to molt into the next life stage, nymphs. Deer tick nymphs will seek a host to feed on in spring and summer. This stage presents the highest likelihood of Lyme disease transmission to humans. After feeding as nymphs, deer ticks will molt a second and final time into adults.