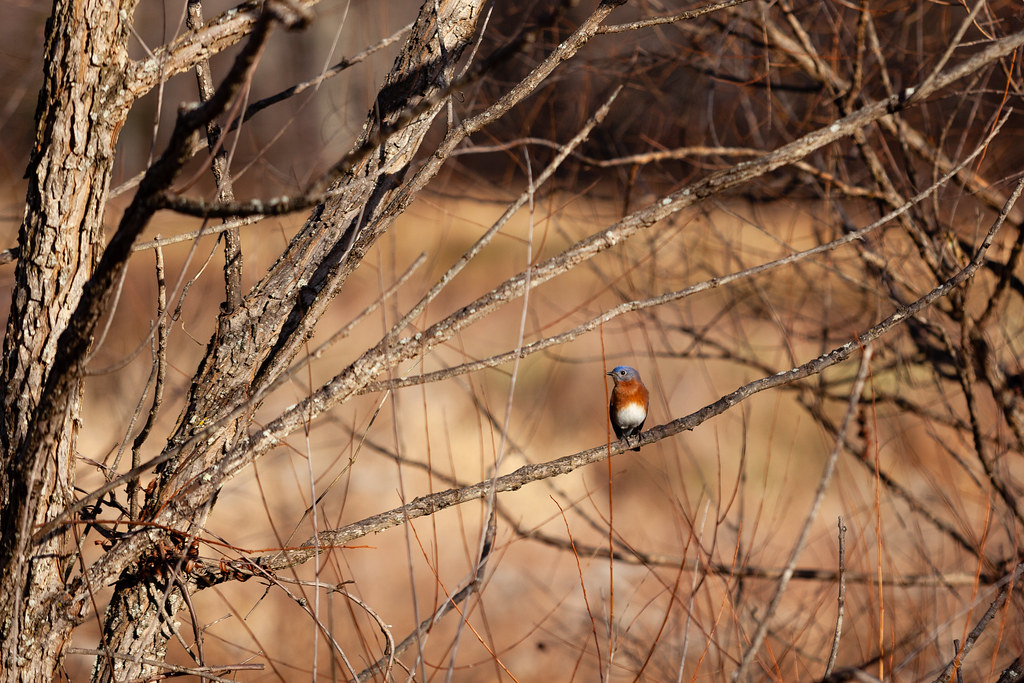 An Eastern bluebird scans the forest floor for insects and other prey while perched a few feet above ground at Middle Creek Wildlife Management Area in Lancaster County, Pa., on Feb. 25, 2018. Several birds were hunting at the edge of woods near a farm field, hopping from branches and sometimes hovering just above ground before diving for a meal. Bluebirds declined in the first half of the 20th century but have increased since the 1960s as conservation efforts have established special nest boxes designed to exclude invasive European starlings. (Photo by Will Parson/Chesapeake Bay Program) Eastern bluebirds, left, and a white-throated sparrow pick fruits off smooth sumac shrubs growing in a meadow at Terrapin Nature Park in Stevensville, Md., on Jan. 27, 2019. (Photo by Will Parson/Chesapeake Bay Program) For noncommercial use contact the Chesapeake Bay Program

The eastern bluebird is a small, plump bird in the thrush family. It can be found throughout the Chesapeake Bay region.

Eastern bluebirds are small birds in the thrush family. They have plump bodies, and large round heads with short, straight beaks. They have long wings and a wingspan of around 10 to 13 inches, but their tails and legs are short. Adult males have deep blue backs, rusty or brick-red coloring on their throat and breast, and bright white bellies. Adult females are more gray-blue, with duller orange-brown breast coloring.

Eastern bluebirds prefer to eat ground-dwelling insects, such as caterpillars, beetles, crickets, grasshoppers and spiders. They’ll perch on wires, posts, and low branches in open country, or in nest boxes and old woodpecker holes, and scour the landscape for prey. They can spot prey from over 60 feet away, and feed by diving down from above to grab their prey. In the colder months, eastern bluebirds perch on late-fruiting trees to eat berries, including:

The flight pattern of eastern bluebirds is low to the ground and fast, with an irregular pattern to their wingbeats. When competing for territory or nesting locations, males can chase each other at high speed and tussle. Their fights include beak clacking, feet grappling, feather pulling and wing hitting.

The call of the eastern bluebird is soft and low-pitched, made to keep in touch with each other or to signal that adults are on their way back to the nest with food. The tu-a-wee sound lasts about a second, with males’ calls typically slightly longer than females’. Eastern bluebirds also have a low-pitched, warbling song made up of several phrases of one to three short notes, lasting about two seconds. Males will sing this song to attract a mate, and females sing it when they see predators on their territory.

Reproduction begins with the adult male eastern bluebird carrying bits of nesting material in and out of the nest. The male will spread his wings and tail to sing and flutter in front of the female. They will sometimes preen each others’ feathers and feed each other, all to entice her to enter the nest hole with him. This nest hole is made of weeds, twigs and dry grass, lined with finer grass and sometimes animal hair or feathers. Nest holes can be found in the cavity of a hollow tree, in an old woodpecker hole or in a birdhouse.

Bluebirds mate for several seasons. The female lays between three and seven pale blue eggs. She incubates her eggs for 13 to 16 days, until they hatch. For the next three weeks, both parents and young from the previous brood bring food to the nestlings, until they leave the nest at about 18 to 19 days on average. Eastern bluebirds produce two to three broods each year.