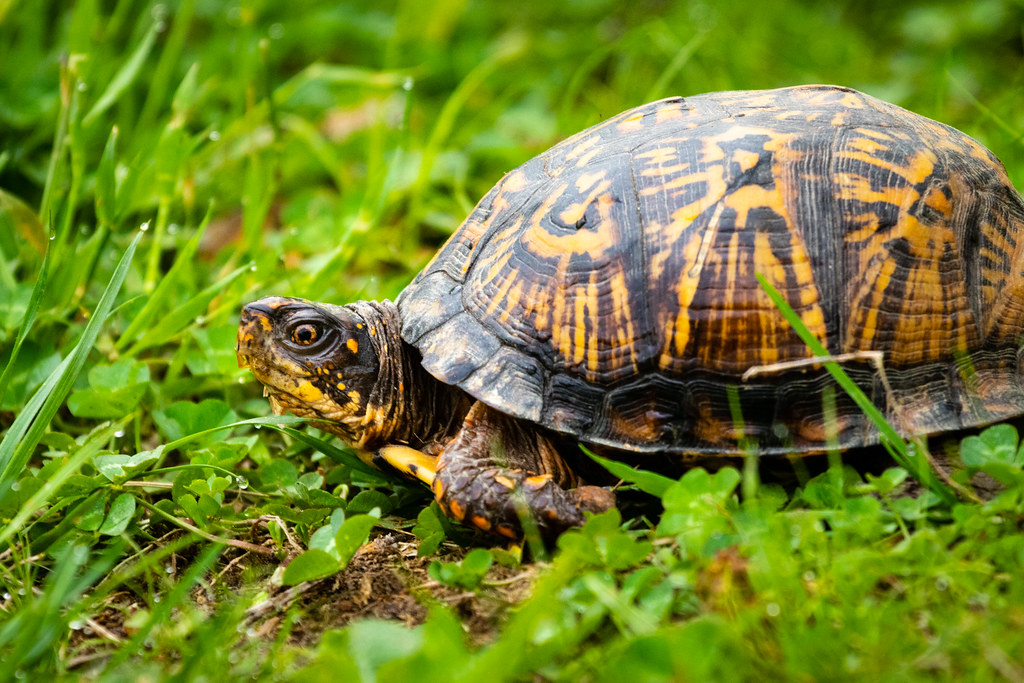 Primarily found in woodlands, box turtles can be found in meadows or grasslands during wet seasons. Above, an eastern box turtle rests near the edge of woodlands in Loudoun County, Va., on May 4, 2018. Box turtles can live to be over 100 years, though disease and predators often limit their lifespan. If you find one crossing a road make sure to move it out of danger in the direction it was already traveling. (Photo by Will Parson/Chesapeake Bay Program) 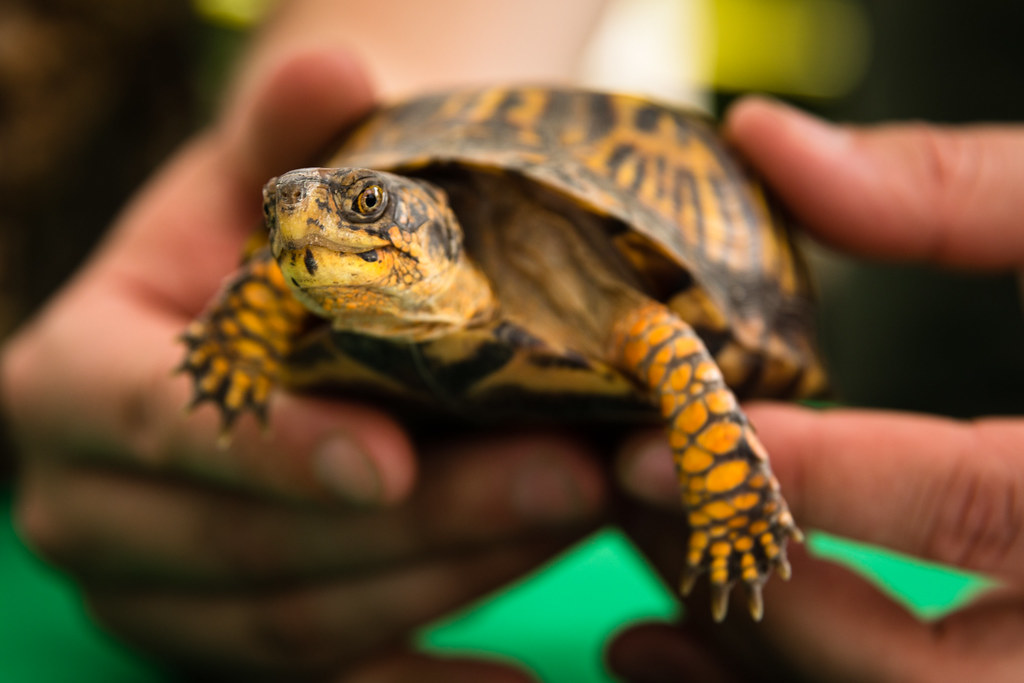 Female box turtles have yellow-brown eyes, while males have red eyes. Above, a box turtle is exhibited at the Smithsonian Environmental Research Center open house in Edgewater, Md., on May 20, 2017. The reptile lives at the Scales and Tales exhibit at Tuckahoe State Park on the Eastern Shore of Maryland. (Photo by Will Parson/Chesapeake Bay Program) 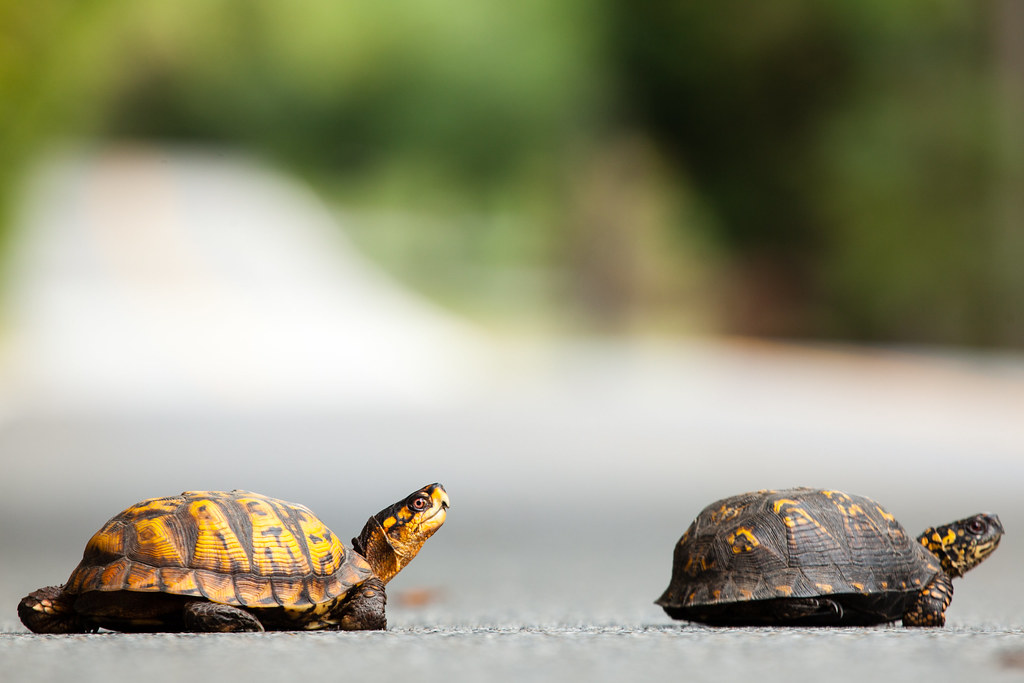 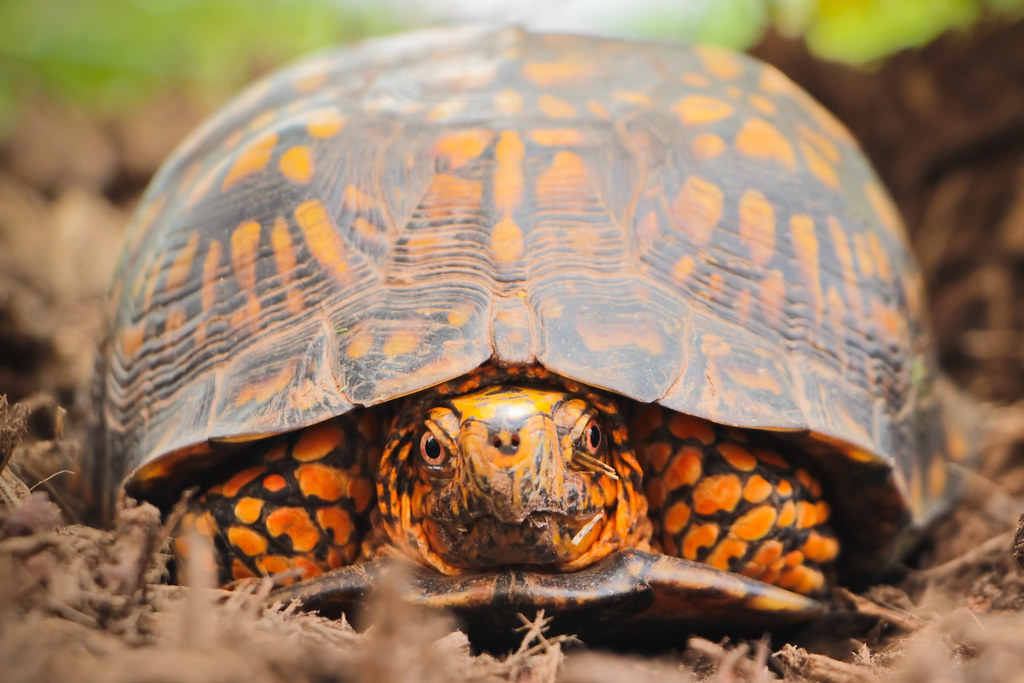 The eastern box turtle is a terrestrial reptile found primarily in woodlands across the Chesapeake watershed.

The eastern box turtle is a small reptile, reaching only about six inches in length and weighing less than one pound. Its tall upper shell, or carapace, is said to resemble a box. The carapace is brown with variable patterns of orange and yellow markings. Its hinged lower shell, or plastron, allows the turtle to hide its entire body, completely protected by the shell. The plastron is usually dark brown, rarely with distinct markings. The turtle has dark, scaly skin with yellow markings. Eastern box turtles have hooked upper jaws, and their toes are only slightly webbed. Males have red eyes, while females have yellow-brown eyes. Males are also larger than females.

Juvenile eastern box turtles feed mostly on animal material, such as slugs, worms, insects and larvae. As adults, they eat mainly plant material, such as seeds, fruits, roots, fungi and grasses. Adults are also known to feed on carrion, fish, amphibians and eggs.

Because of their ability to retreat into their shell, adult box turtles have few predators. Raccoons, chipmunks, skunks, coyotes, foxes, snakes and owls prey on young box turtles or box turtle eggs.

Mating occurs between late spring and early fall. Females dig a nest in loamy or sandy soil to lay their eggs, then cover them with soil and leaf litter. Females lay one or more clutches of 4 to 5 eggs each over late spring and summer. After 70 to 80 days, eggs hatch, and hatchlings may spend winter in the nest or they may emerge and find another place to hibernate with adults. Turtles will hibernate in depressions, cavities filled with leaf litter or woody debris. Eastern box turtles usually live 40 years, but can live over 100 years.