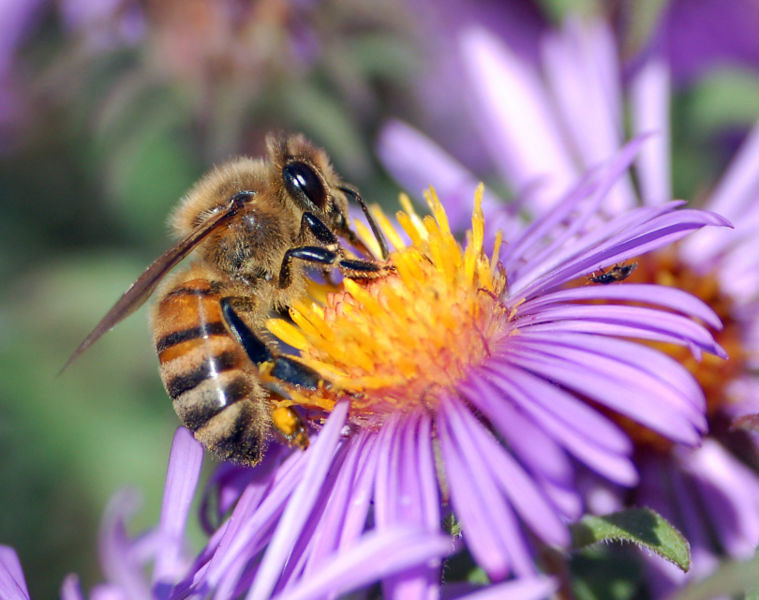 Female worker bees feed on and collect the pollen and nectar of flowering plants. (Gayl Miller-Alexander/Flickr)

The European honey bee, found worldwide, is known for its delicious honey and painful sting.

The European honey bee grows to between 3/8 and 3/4 of an inch long. It has two sets of wings and is typically black or brown with yellow bands on its abdomen. Queen bees, or fertile females, grow to be the largest in size. Drones, or males, are medium-length and stout, and they have significantly larger eyes that females. Worker bees—small, sterile females—have barbed stingers and special hind legs that are used as a pollen basket.

Adult bees eat pollen and nectar collected from flowering plants by worker bees, as well as concentrated nectar called honey. Young larval bees eat honey, nectar and the bodily secretions from worker bees—called "worker jelly" or "royal jelly." This jelly determines if a female will become a worker or a queen. Bees will also feed on honeydew or the secretions of sap-feeding insects such as aphids, and have been known to raid other colonies' hives for their food stores.

The dark brown and bright yellow bands on the bee's body warn predators of its venomous sting, deterring attacks on the hive and the bees, food and wax contained within. Some mammal predators such as bears, honey badgers, skunks and gorillas will attack hives for their honey. Other predators like toads, opossums and flycatcher birds will eat the bees themselves.

Flight is highly dependent on weather; worker bees cannot fly or collect food during high winds, extreme temperatures or heavy rain. It uses short and rapid wing strokes to fly. The characteristic "buzz" of honey bees is caused by their rapid wing movements; honey bees can beat their wings nearly 230 times per second.

Mating occurs in spring and summer near bee hives. The queen bee—the only female in the colony capable of reproduction—will fly through assemblines of droves from her own and other hives. She attracts drones with her pheromones and will mate mid-flight. After mating, the drones will fall out of the sky and die within a few hours. Unfertilized eggs develop into male bees and fertilized eggs develop into female bees. About three days after being laid, eggs hatch into larvae, which are cared for by worker bees. During the larval stage, female bees can develop into worker bees, or queen bees if they are fed royal jelly. Larvae develop into adult bees in 15 to 24 days, depending on sex. Worker and drone bees will usually live between a few weeks to several months, while queen bees can live up to five years.