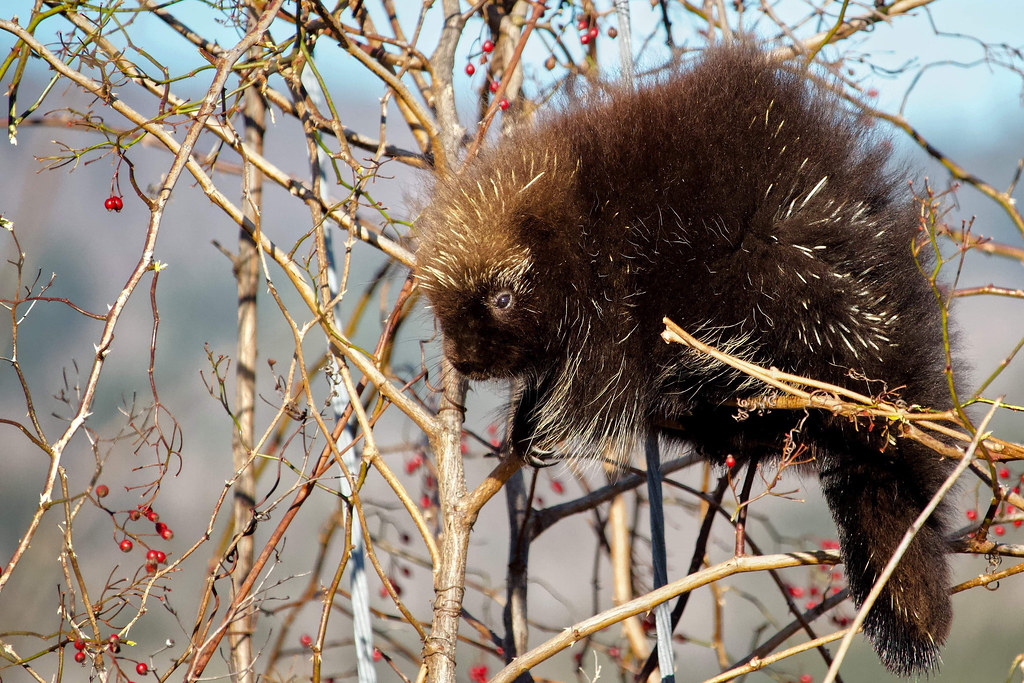 The North American porcupine is a native rodent with an iconic feature⁠—quills—that it uses for defense.

The North American porcupine is a rodent with black to brownish-yellow fur and quills all over its round body, except for its stomach. Quills are hairs with solid, barbed tips and hollow shafts, and a porcupine has an estimated 30,000. The hollow quills allow porcupines to stay afloat in water. Baby porcupines have soft quills that begin hardening about an hour after birth. Porcupines have strong, short legs and their feet have hairless soles to help it climb trees. Males are larger than females. Adult porcupines weigh around 20 pounds. The average body and head length is 25 to 36 inches and the average tail length is 8 to 10 inches.

The porcupine is a herbivore that eats leaves, twigs, bark and green plants like skunk cabbage and clover. Porcupines climb trees or forage on the ground for food.

The porcupine is not an aggressive animal and will only attack if it is threatened. Once threatened, porcupines will chatter their teeth and produce a chemical odor to warn off predators. If the threat continues, the porcupine will turn its back, raise its quills and lash with its tail. Although porcupines cannot shoot their quills, they can aim their body movements for vital places on the predator’s body. If the predator is hit, the quills can embed themselves in the animal because the body heat of the predators body causes the barbs to expand. Their quills come off easily when touched, and their sharp tips and overlapping scales or barbs that make them difficult to remove. Even so, porcupines are preyed upon by co-adapted predators including lynx, bobcats, coyotes, wolves, wolverines, great horned owls, mountain lions and fishers. Fishers are especially equipped to prey upon porcupines, and will attack from the front until they are able to flip a porcupine on its back and attack the porcupine’s unprotected stomach.

Mating occurs in late summer and early fall, and starts with a mating ritual. Male porcupines perform dances and spray urine over females’ heads. After mating, and a gestation period of seven months, the female gives birth to a single baby. The baby stays with its mother for about six months, but will start foraging for food only a couple of days after birth.