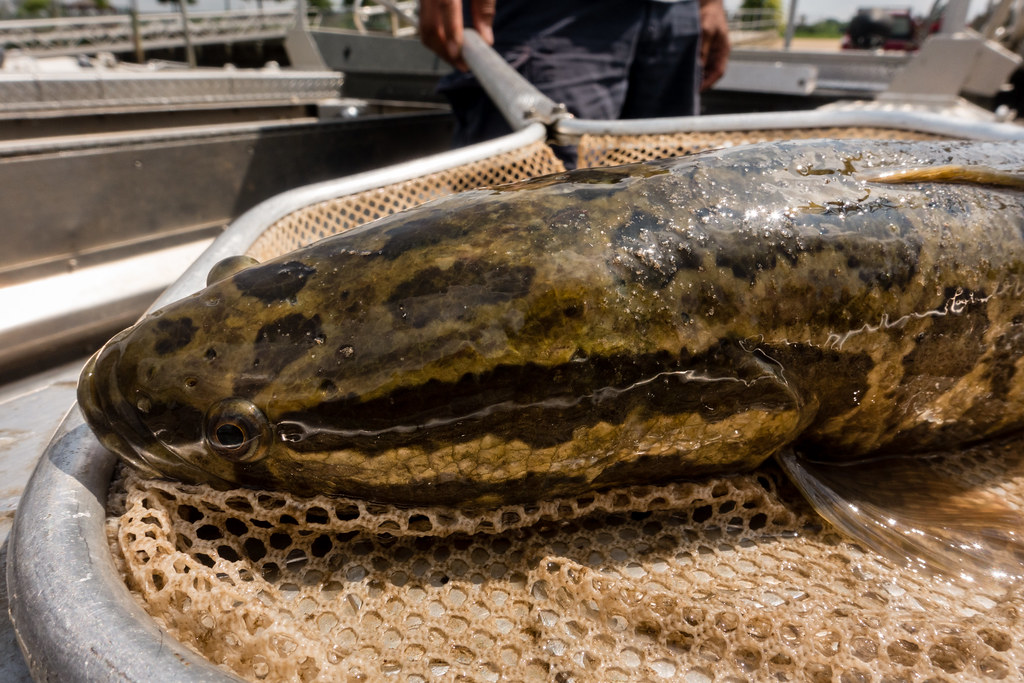 A snakehead is caught at Bladensburg Waterfront Park on May 31, 2016. Snakeheads are an invasive species that can breathe air and is known to travel short distances on land to reach new bodies of water. (Photo by Will Parson/Chesapeake Bay Program) 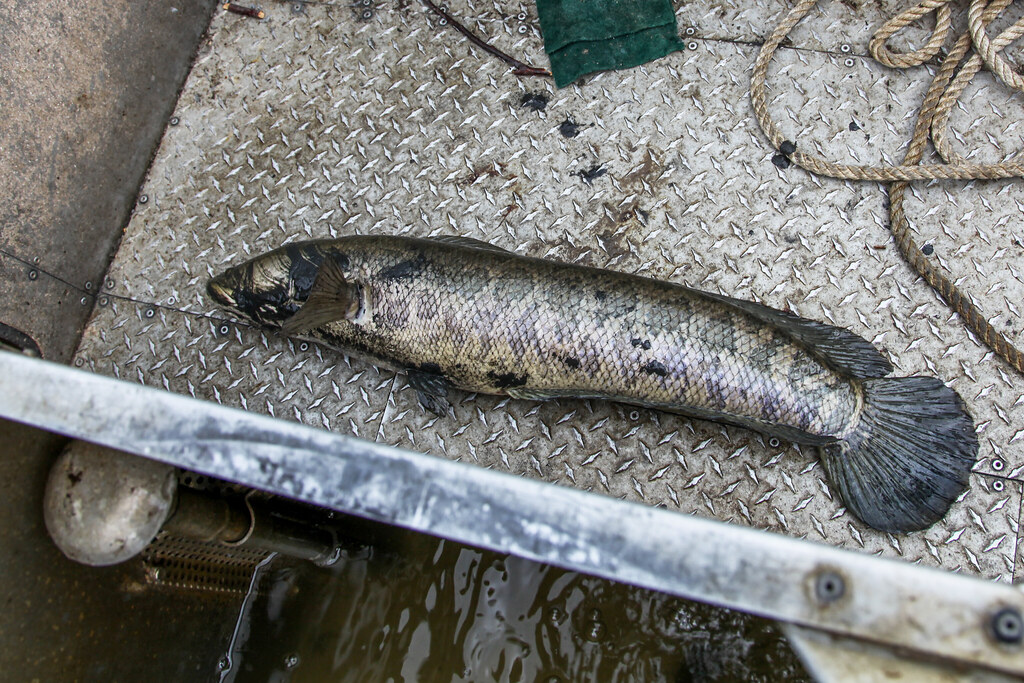 A snakehead is caught during largemouth bass monitoring in Chicamuxen Creek near the Potomac River in Charles County, Md., on April 23, 2013. The Maryland Department of Natural Resources Tidal Bass Survey team monitors two bass sanctuaries that were established in 2010 in Chicamuxen and nearby Nanjemoy Creek. (Photo by Jenna Valente/Chesapeake Bay Program)

The northern snakehead has a large mouth with many teeth. (U.S. Geological Survey Archive)

The northern snakehead is a large, long fish with a mottled, snake-like pattern. It is an invasive species that can be found in Maryland and Virginia.

The northern snakehead's elongated body grows to 33 inches in length. It has tan, dark brown or black coloring with a mottled, snake-like pattern. Its long dorsal fin runs along most of its back. It has a large mouth with a protruding lower jaw and many teeth. Young snakeheads may be golden brown or pale gray, darkening as they grow older.

Snakeheads prefer to eat fish, but will also feed on frogs, crustaceans and small birds, mammals or reptiles. Once a snakehead is fully mature, other fish will make up over 90% of their diet, such as largemouth bass and white perch. Snakeheads typically feed in schools and prefer to hunt their prey in areas of low light.

While the northern snakehead has no natural predators in the Chesapeake Bay watershed, young snakeheads have been reported being carried away by large birds of prey, such as ospreys and eagles. However, once they have fully matured, northern snakeheads are not prone to predation.

Female snakeheads reach sexual maturity at two years old and can lay as many as 15,000 eggs one to five times per year. The eggs will hatch in one to two days. Larvae remain in the nest, which both parents guard. Larvae are nourished by a yolk that they absorb by the time they are less than one-third of an inch long.

After that, they feed mostly on insects, small crustaceans and fish larvae. Snakeheads are highly resilient to changes in salinity, temperature and diet, and can live out of water for up to four days. They will also lie dormant in mud during droughts. On average, the northern snakehead lives eight years in the wild.