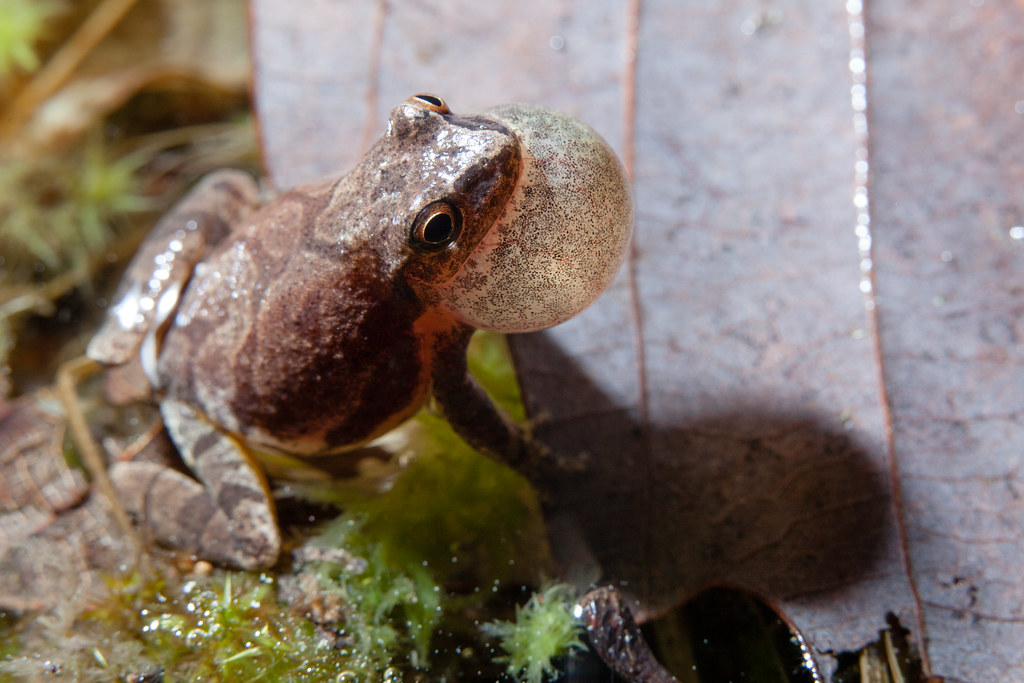 A spring peeper tries to attract a mate in a vernal pool at Kings Gap State Park in Thurmont, Pa., on March 25, 2016. (Photo by Will Parson/Chesapeake Bay Program) 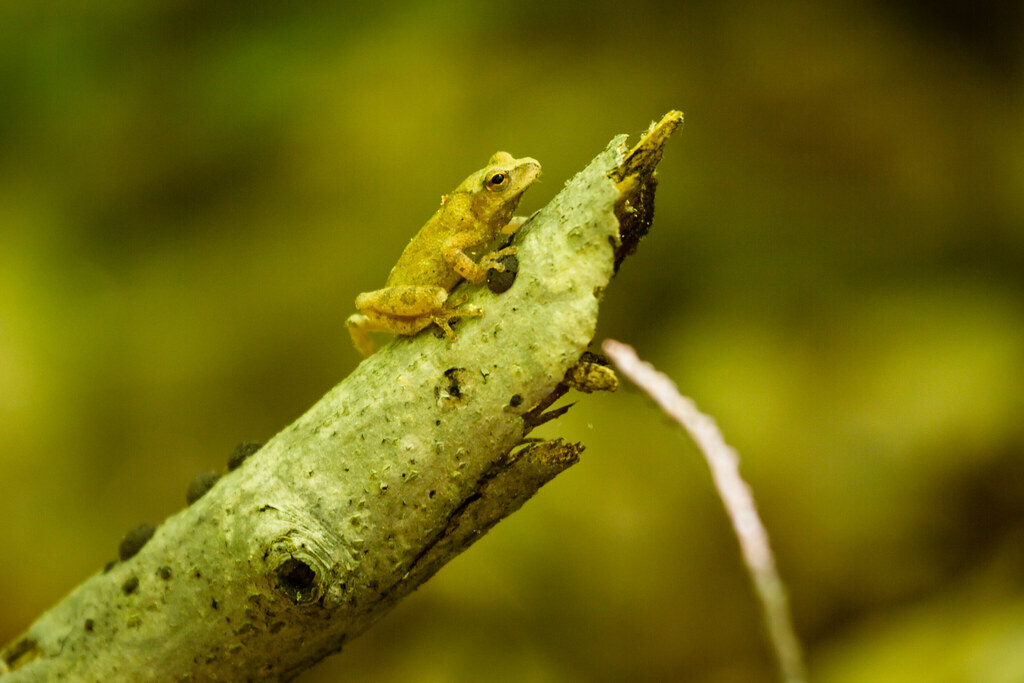 The northern spring peeper is a tiny, brownish tree frog. Above, a spring peeper rests on a broken tree branch in a bog on the property of Nick Carter in Caroline County, Md., on May 13, 2014. (Photo by Steve Droter/Chesapeake Bay Program) 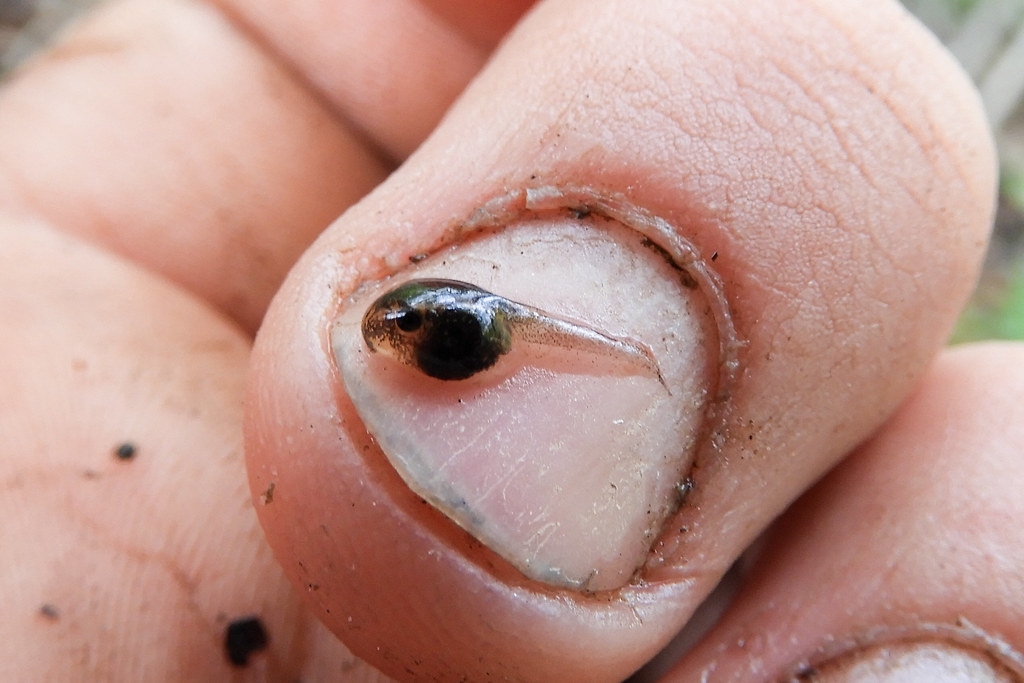 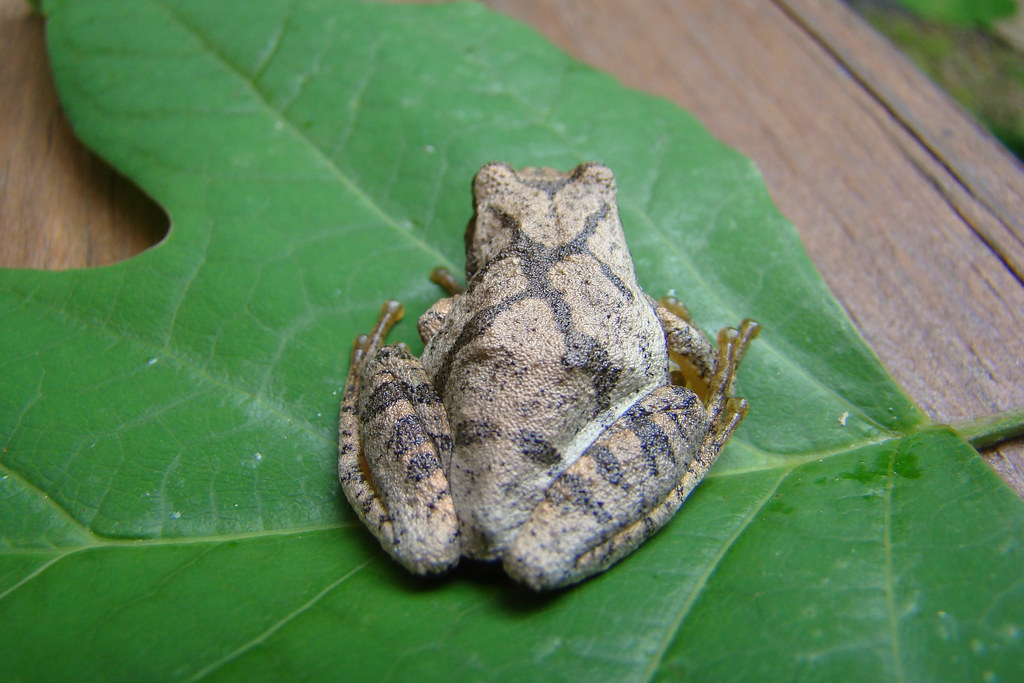 Northern spring peepers have a distinctive X-shaped cross on the back. The X isn’t always a perfect form, but it is present in some way. (Photo courtesy bjaynes/iNaturalist CC BY-NC)

The northern spring peeper is a tiny, brownish tree frog with a distinctive X-shaped cross on its back. It lives in marshy woods and near ponds and swamps throughout the Chesapeake Bay watershed. Its “peeping” call is one of the first signs of spring in the region.

The northern spring peeper varies in color from grayish brown to olive. They have a dark X-shaped cross on its back and a whitish belly. It has a dark bar between its eyes and dark bands on its legs. A vocal sac under its chin puffs out when making a call. Large, sticky toe pads on each of its webbed feet help in climbing trees and other plants.

Spring peepers feed on small insects such as ants, beetles and flies, as well as spiders.

Preyed upon by many animals, including owls and other birds, snakes, salamanders and large spiders.

Males emit a high, piping whistle or “peep” once every second during breeding season. Calling may be louder on humid evenings or after a warm spring rain, when males congregate.

The northern spring peeper’s distinctive call is one of the first signs of spring in March. Males also make a lower-pitched trilling whistle when another male moves too close to its calling site.

Spring peepers breed from March until June in freshwater ponds without fish. The male’s call is extremely important during breeding season. Females choose their mate based on the quality of the call. The faster and louder he sings, the more likely he is to find a mate.

Females lay hundreds of eggs in the water. The clumps of eggs attach to twigs and aquatic vegetation. Once breeding season is over, peepers move into woodlands and shrubby areas. Eggs hatch within 6 to 12 days, depending on temperature. Tadpoles are able to breathe with gills and swim using a tail.

The tail of a tadpole actually makes them larger than adult peepers. As they mature, tadpoles lose their tail and develop lungs for breathing. Within eight weeks, tadpoles are fully transformed into young frogs and leave the pond.

Peepers grow to their adult size by the end of the summer and reach maturity within one year.