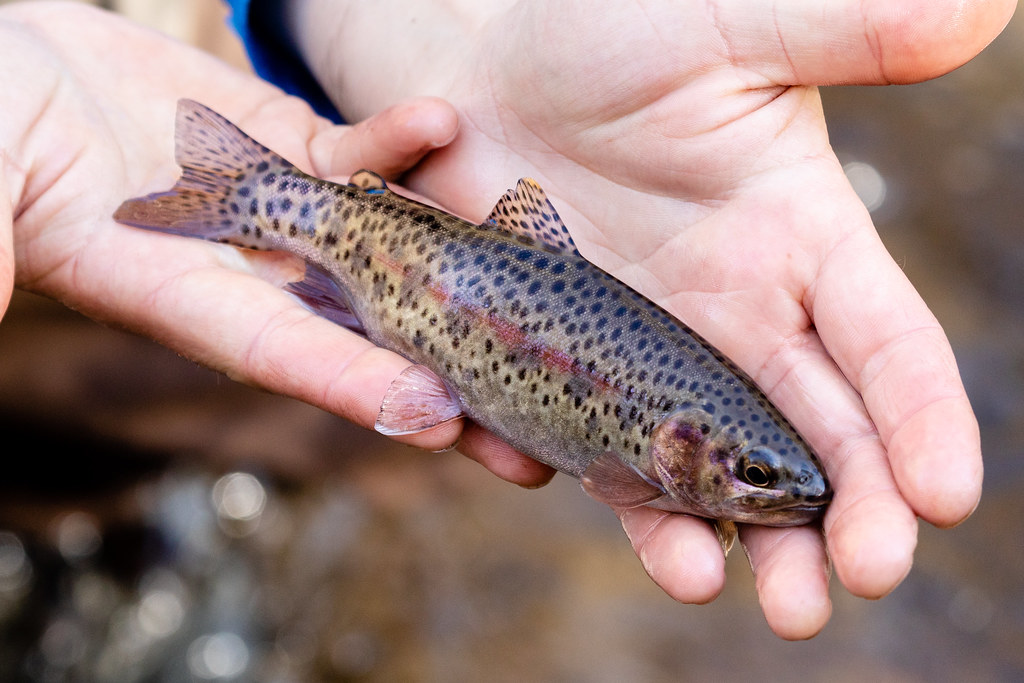 The rainbow trout is well known for the pink stripe along its sides, which is most pronounced in breeding males. (Jon Nelson/Flickr) The rainbow trout is covered with black speckles over its bluish-green back, which helps camouflage it among pebbled river bottoms. (Sheila Sund/Flickr)

Rainbow trout are common and widespread in most of the United States, but in certain regions are considered endagered due to pollution.

The rainbow trout is a large, torpedo shaped fish that usually reaches a weight of 8 pounds and a length of 20 to 30 inches in the wild. It is speckled with black spots on its bluish-green back, with a silver belly and a pink stripe on the sides of its body. The rainbow trout’s coloration often varies depending on age and habitat. In addition to their black speckles, young fish have 8 to 13 dark vertical spots on their sides, called parr marks, which fade as they grow older.

The rainbow trout is prey for larger fish, fish eating birds, including herons and kingfishers, and mammals, including American Black bears, river otters, raccoons and humans. To avoid predators, this fish swims at high speeds and benefits from their silver belly and bluish-green back, which resemble the top of the water from below and the river bottom from above.

During spawning, a male and female, parallel to each other, will release sperm and eggs into the nest at the same time. Eggs, surrounded in a cloud of sperm, become fertilized and develop into hatchlings over 3-4 weeks, protected by their mother. After eggs hatch, young fish stay in the nest for 2-3 more weeks, surviving on nutrients from a yolk sac until they emerge from the nest. Rainbow trout are able to spawn at age 3 and usually only spawn every 3-5 years.