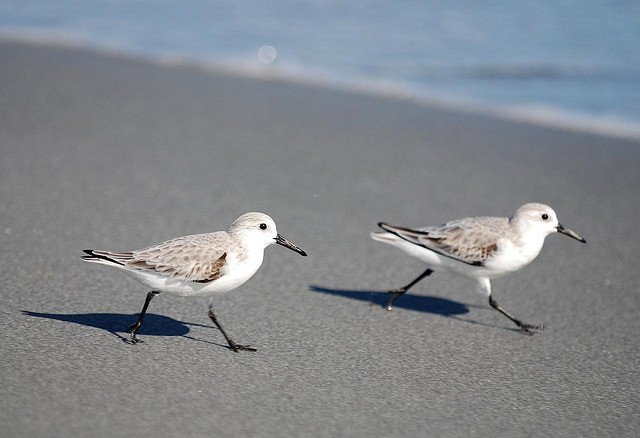 Sanderlings are the only sandpiper without a hind toe, which allows them to be strong runners. (VadimK/Flickr) 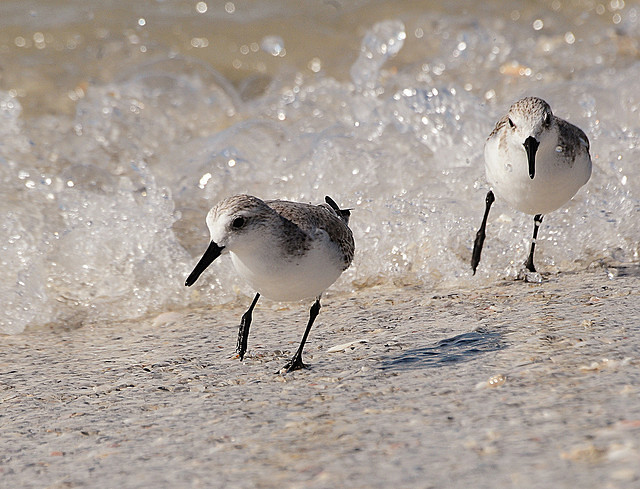 Small flocks of sanderlings are often seen darting along the water’s edge, quickly running away from incoming waves. (Aditi-the-Stargazer/Flickr) 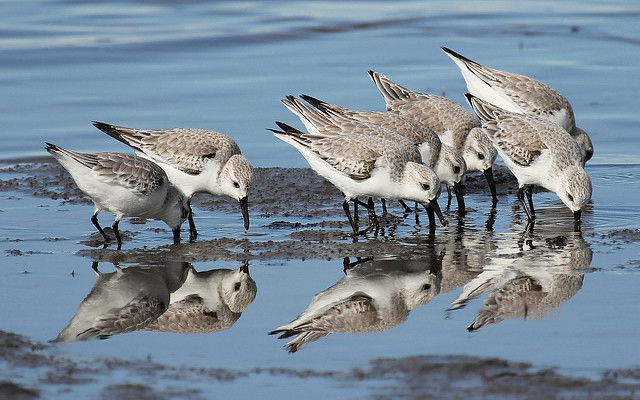 Small flocks of sanderlings feed at the water’s edge by probing the sand with their bills. (Andrew Reding/Flickr) 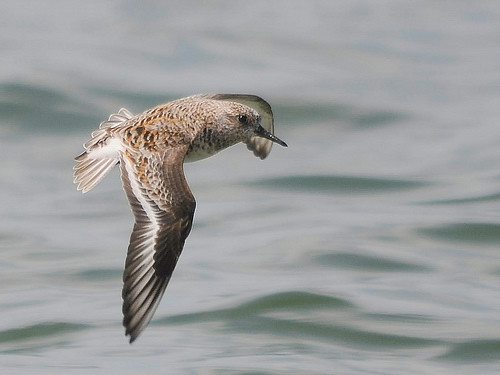 Sanderlings have a broad, white stripe bordered by black on the wings. (Isidro Vila Verde/Flickr)

The sanderling is a small, pale sandpiper with black legs and a straight black bill and visits the Chesapeake Bay’s beaches and tidal flats from autumn through spring.

Sanderlings have a small, stout body that grows to seven to eight inches in length with a wingspan of 14 inches. Their plumage is brownish-gray in spring and grayish-white in winter. They have a white belly and a broad, white stripe bordered by black on their wings. They have a straight black bill and black legs.

This bird eats small, beach-dwelling animals such as bristle worms, amphipods, mollusks and crustaceans. It feeds at the water’s edge by probing the sand with its bill. Small flocks dart along the water’s edge, quickly running away from incoming waves.

Few predators exist outside of the sanderling's breeding grounds. When they nest and breed in the high Artic tundra,  jaegers, glaucous gulls, snowy owls, artic foxes, and wolves are predators. In the winter when sanderlings migrate, peregrine falcons are a predator and when threatened by avian predators like the falcon, sanderlings take flight in a packed group and fly over the ocean.

Sanderlings fly in flocks. Their white wing stripe is visible during flight. If disturbed, they will quickly fly away.

Sanderlings do not nest and breed in the Bay region, instead breeding on islands along the rocky coast of the high Arctic tundra. Once their chicks hatch, sanderlings migrate south through the Chesapeake Bay region for the winter. They can live for 13 years.