Tundra swans forage at Crow's Nest Natural Area Preserve in Stafford County, Va., on Nov. 18, 2014. The tundra swan is a large, white bird with a black bill. (Photo by Will Parson/Chesapeake Bay Program) 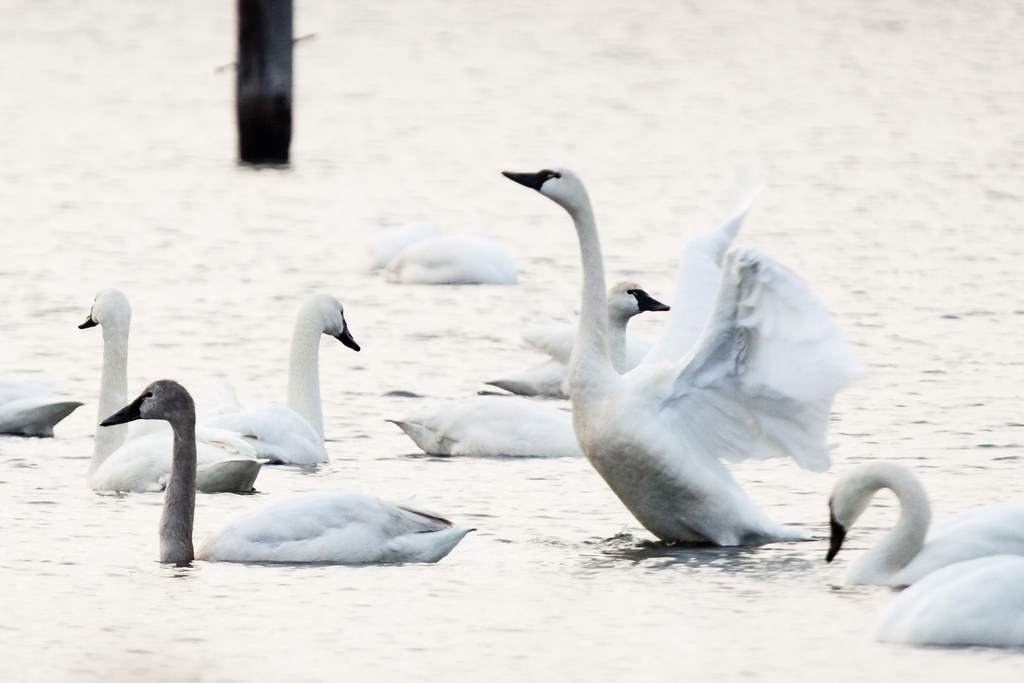 A large flock of tundra swans flocks at Rose Haven, Md., on March 5, 2016. After wintering on the Chesapeake Bay, the species will migrate to the Arctic to breed in the summer. (Photo by Will Parson/Chesapeake Bay Program)

A tundra swan visits Blackwater National Wildlife Refuge in Dorchester County, Md. Tundra swans are found in winter on shallow fresh and brackish waters in the Chesapeake Bay and its tidal rivers, wetlands and marshes.

The tundra swan is a large, white bird that visits the shallow waters of the Chesapeake Bay and its tidal rivers and wetlands from autumn through spring.

The tundra swan has a white body and long, slender neck held straight in the air. It has a black bill, often with a yellow spot at the base in front of the eye. It grows to about 4.5 feet with a wingspan of more than five feet; males tend to be slightly larger than females.

This bird eats seeds and bay grasses such as redhead grass, widgeon grass and sago pondweed. It feeds by submerging its head and neck underwater to reach its food, sometimes “tipping up” its tail in the process. It will also eat winter wheat and other grains in farm fields.

Foxes, gulls and weasels prey on swan eggs and young.

Tundra swans migrate in large V-shaped or ribbon-like flocks. Flocks are often heard before they can be seen. They are strong flyers and take flight by running across the water and slapping their wings on the surface.

Breeding occurs during the summer in the Arctic tundra of Canada and Alaska. In autumn, adults and their young, called cygnets, fly south to the Bay region. Cygnets are as large as adults but are brownish-gray. They molt to white by late winter or early spring, when the swans return to the tundra to breed.