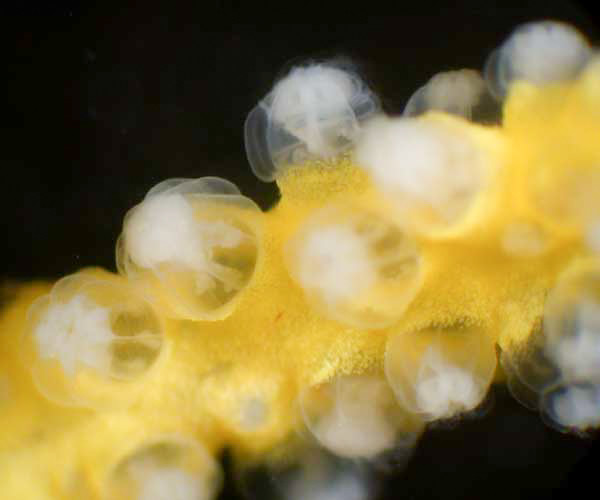 Whip coral is an invertebrate with long, whip-like branches covered in tiny polyps. It lives on rocks, reefs and other hard surfaces throughout the lower Chesapeake Bay.

Whip coral can grow to three feet tall. Its long, slender, whip-like branches are covered with coral polyps, which look like tiny, white dots against the coral's skeleton. It varies in color from yellow, tan or orange to deep purple.

Whip coral is a suspension feeder which means it feeds on organic matter suspended in the water. Each polyp has eight feathery, saw-toothed tentacles that periodically emerge to sweep plankton and other tiny particles into the coral’s body.

Unlike other corals, whip coral reproduces sexually by external fertilization. After hatching, free-swimming larvae float in the water for three to 20 days. Larvae eventually settle to the bottom and search for a hard surface to attach themselves to. After attaching, larvae morph into a form that more closely resembles adults.