Yellow perch are part of the indoor coastal plain gallery at the Virginia Living Museum in Newport News, Va., on March 9, 2016. (Photo by Will Parson/Chesapeake Bay Program) 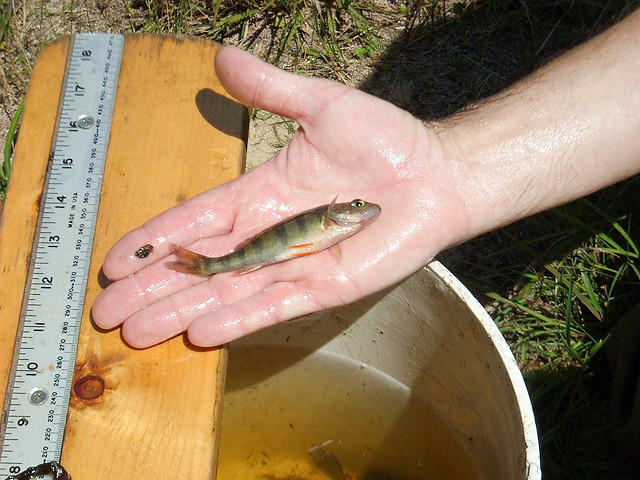 Yellow perch are bright yellow with dark, vertical bars on their sides. (TheMarvelousInNature.wordpress.com/Flickr)

The yellow perch is a bright yellow fish with dark, vertical bars on its sides. It lives year-round in the rivers of the Chesapeake Bay.

The yellow perch has an elongated, golden or greenish-yellow body with five to eight dark, vertical bands on its sides. It grows to 12 inches in length. Its fins are reddish-orange, with spawning males having more intensely colored fins. It has a forked tail fin and two separate dorsal fins: one spiny and one smooth.

Spawning occurs in late February to March. The yellow perch is considered to be semi-anadromous, which means it lives in fresh or brackish rivers and spawns in small, shallow freshwater streams. They are usually found near the shoreline among bay grass beds, which provide food and shelter.

The female lays long, gelatinous strands of amber-colored eggs, which stick to underwater vegetation, tree braches and other debris. After spawning, adults migrate back downstream. Females mature between 2 to 4 years old, while males mature about one year earlier. Yellow perch can live for 13 years.