Oriole nests hang from trees and are constructed entirely by the females. (Photo courtesy ben_long_hair/flickr under CC BY-NC-ND 2.0 license.) 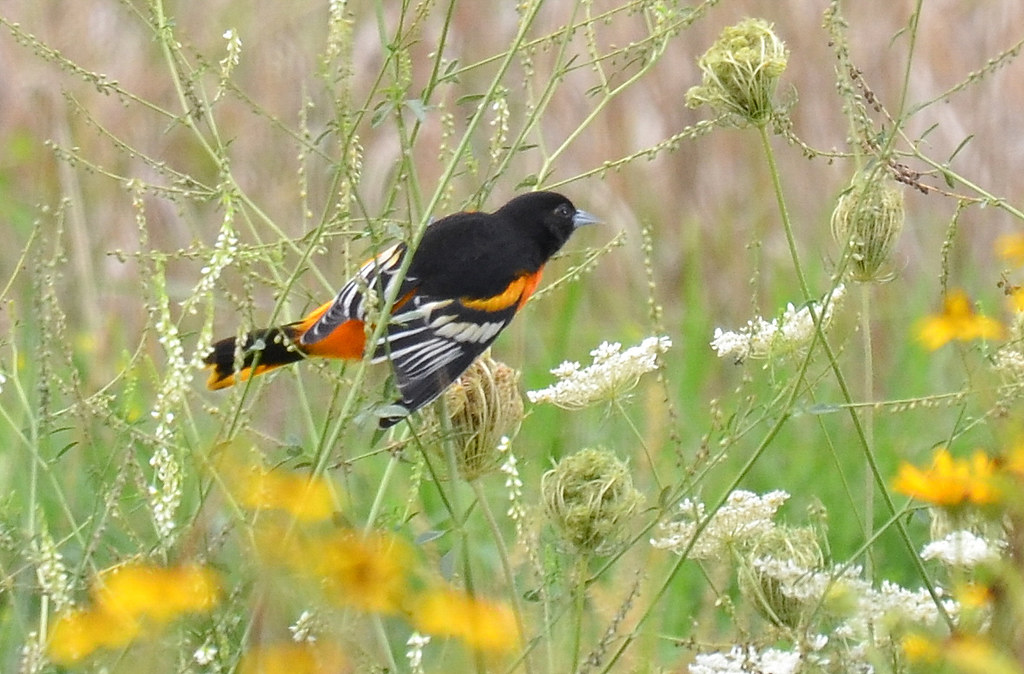 Orioles tend to fly in direct paths, except during courtship displays. (Photo courtesy cheepshot/flickr under CC BY 2.0 license)

Baltimore orioles are orange and black songbirds, slightly smaller than a robin. They visit the Chesapeake Bay region during the summer months.

Baltimore orioles are between 6.5 and eight inches in length and weigh one to 1.5 ounces, making them slightly smaller than a robin. They have a wingspan of 3.5 to four inches. Males are brighter and slightly larger than females. Males are black with bright orange on the breast, tail and wing bars, while females are an olive-brown to yellow color with white wing bars and a gray bill. Young birds will have the paler female coloring until they are a year old.

Baltimore orioles primarily eat insects and fruit. They will catch insects by searching through foliage or even in midair. Orioles eat many pest insects, including the forest tent caterpillar. In suburban areas, orioles can be drawn to fruit or jelly in feeders. They may also feed on nectar from flowers.

Orioles have a variety of predators, from larger birds, like crows and screech owls, to mammals, like squirrels and domestic cats. Their predators typically target eggs or nestlings. Orioles have distinct alarm calls to warn of predators, and will mob and harass predators that come near.

Orioles in flight can be identified by their bright orange underside. They tend to fly in direct paths, unless using wing movements to communicate.

Male orioles sound flute-like, and each one has a different song. Female songs are shorter and less complex than the male versions. Both whistle a “hew-li” sound, which is distinct from any other birds in its range. Nestlings are also quite loud, especially when they’re hungry.

Orioles breed once yearly between May and June. Males try to attract females by bowing, singing and displaying their plumage. Females may respond with songs or a display of quivering wings, or may ignore the males. Nests, which are woven pouches that hang from tree branches, are built almost entirely by the female. She will usually lay four pale-gray to bluish-white splotchy eggs. The eggs incubate for two weeks before hatching. For the first two weeks of life, the fledglings stay in the nest and are fed by their parents. After that time, they become independent. Baltimore orioles have a lifespan of up to 11.5 years in the wild and up to 14 years in captivity.