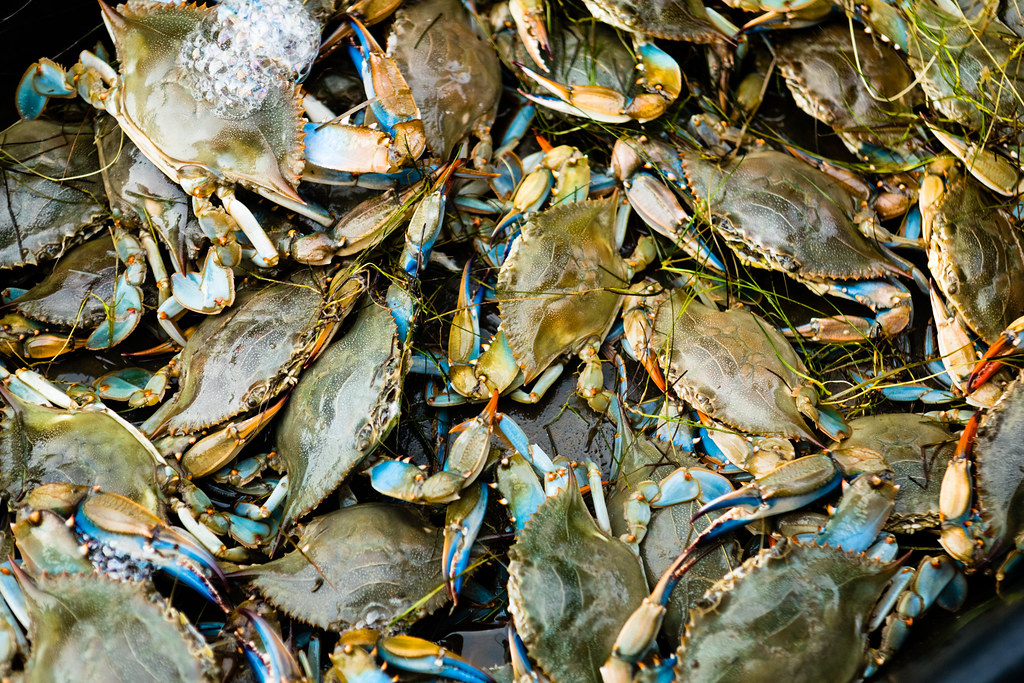 Blue crabs are one of the most distinctive species in the Chesapeake Bay. Above, blue crabs are harvested near the Honga River in Somerset County, Md., on Aug. 3, 2017. (Photo by Will Parson/Chesapeake Bay Program) 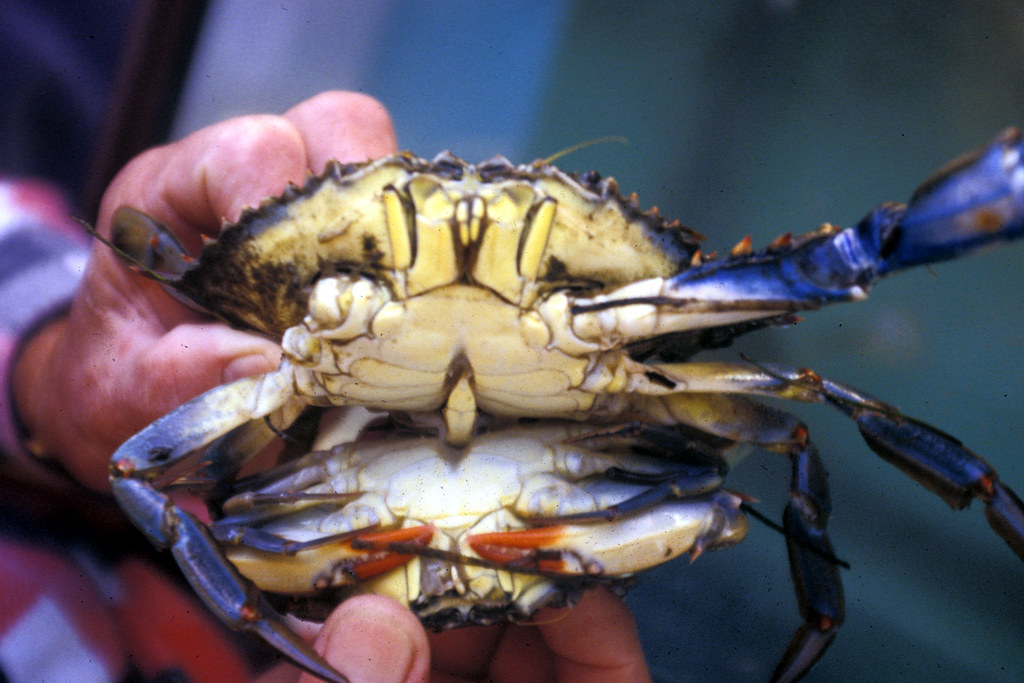 A pair of mating blue crabs is known as a doubler. 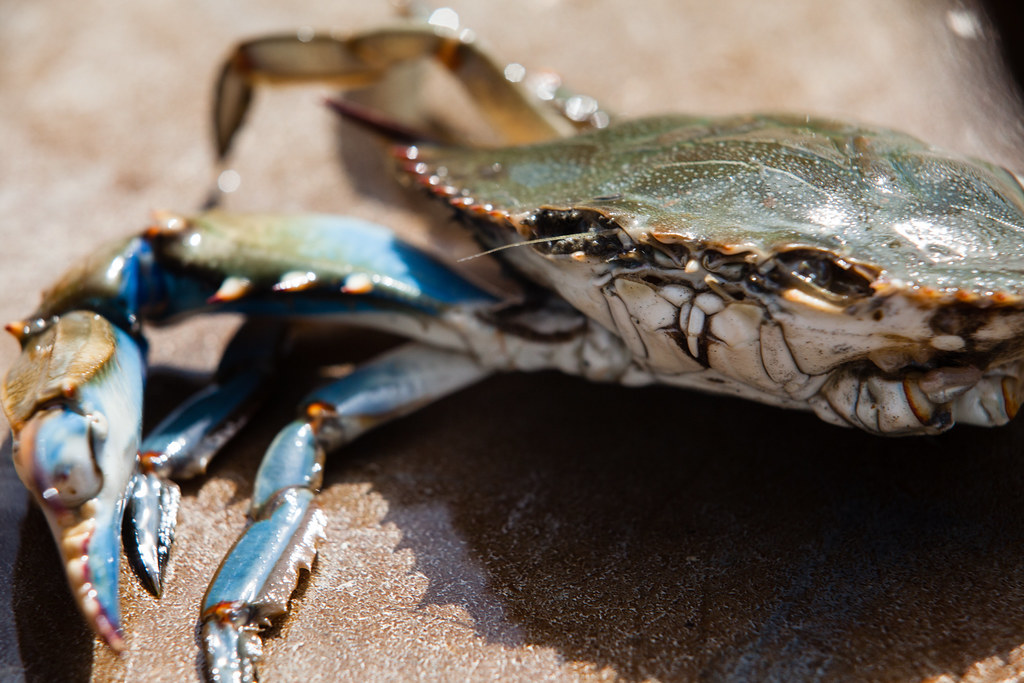 A sluggish male blue crab rests on the deck of the Virginia Institute of Marine Science (VIMS) R/V Bay Eagle after being caught by the Blue Crab Winter Dredge Survey in the lower stretch of the Chesapeake Bay near the mouth of the York River in Virginia on March 8, 2016. The survey operates during the winter, when blue crabs burrow into the mud and remain dormant until water temperatures rise. (Photo by Will Parson/Chesapeake Bay Program) 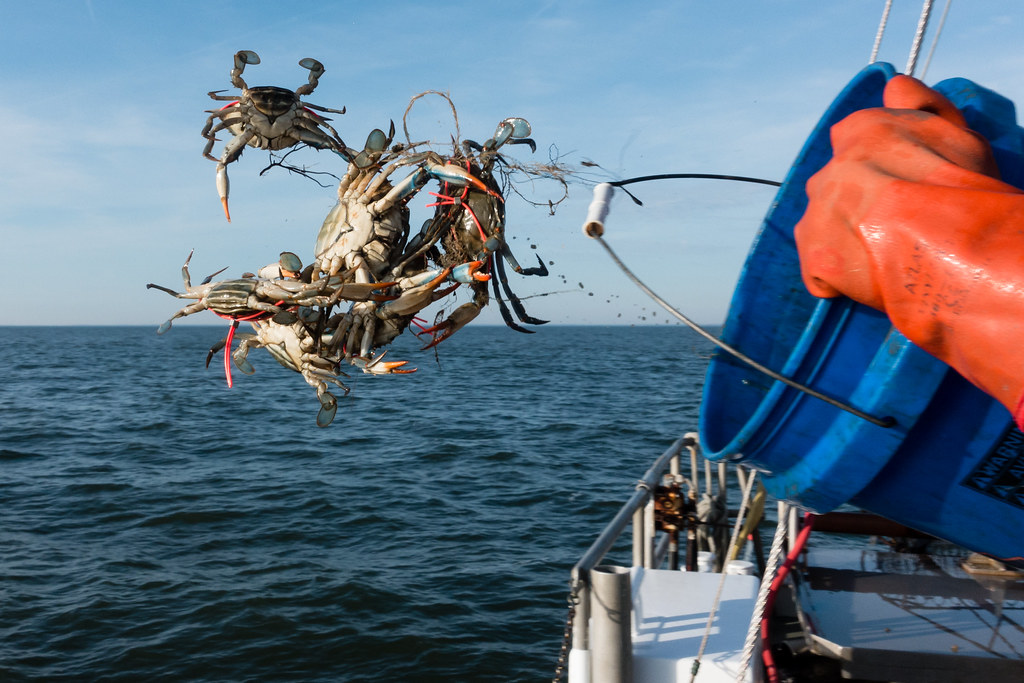 Marine Scientist Gabrielle Saluta of the Virginia Institute of Marine Science (VIMS) returns tagged blue crabs from aboard R/V Bay Eagle in the lower stretch of the Chesapeake Bay near the mouth of the York River in Virginia on March 8, 2016. (Photo by Will Parson/Chesapeake Bay Program) Tuana Phillips, a staffer with the Chesapeake Research Consortium, holds an adult blue crab during a trip to Smith Island, Md., on Oct. 27, 2014. Partners of the Chesapeake Bay Program Forestry Workgroup explored the down-Bay environment of Smith Island to see the impact of their restoration efforts. The visitors hauled up their own crab pots, sorted oysters on the water and experienced life in the Smith Island communities of Tylerton, Ewell and Rhodes Point. (Photo by Will Parson/Chesapeake Bay Program) 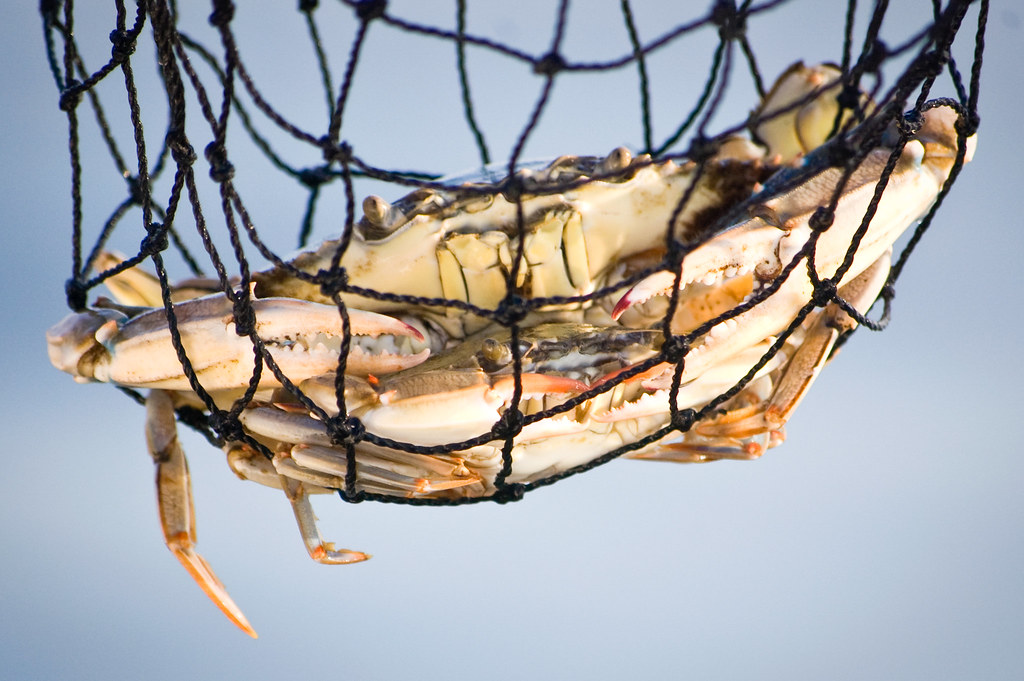 A pair of mating blue crabs, known as a "doubler," are caught in a dip net on the Chesapeake Bay near the mouth of the Choptank River on Aug. 27, 2010. (Photo by Alicia Pimental/Chesapeake Bay Program)

The blue crab is a swimming crustacean with bright blue claws and an olive green shell. It is one of the most recognizable species in the Chesapeake Bay.

The blue crab's carapace (shell) varies in color from bluish to olive green, and can reach up to 9 inches across. The carapace has nine marginal teeth on each side; the ninth teeth are strong spines. Its claws are bright blue, and those of mature females feature red tips. Blue crabs have three pairs of walking legs and paddle-shaped rear swimming legs. Males have a strongly tapered abdomen, or "apron," that resembles an inverted T. Mature females have a broad, rounded apron, and immature females have a triangular apron.

Blue crabs will feed on nearly anything they can find, including clams, oysters, mussels, smaller crustaceans, freshly dead fish, and plant and animal detritus. They will even eat more vulnerable soft-shelled blue crabs and small juveniles.

Blue crabs mate from May through October in the brackish waters of the Chesapeake Bay. Prior to mating, males will cradle a soft-shelled female in their legs, carrying her for several days while he searches for a protected area for her final molt. Once she molts, the pair mates. After mating, the male continues to cradle the female until her shell hardens. Males eventually leave to search for another mate, while females migrate to the higher-salinity waters of the lower Bay.

As they migrate toward the mouth of the Bay, females develop an external egg mass, or sponge, beneath their aprons. Each bright orange egg mass may contain between 750,000 and two million eggs. The egg mass darkens as the developing larvae consume the orange yolk. After about two weeks, larvae are released near the mouth of the Bay.

Currents transport the blue crab larvae, called zoea, out into the coastal waters, where they molt several times as they grow. After four to eight weeks of development in the coastal ocean, the zoea return to the brackish waters of the Bay. During their last larval molt, zoea metamorphose into a post-larval form called the megalopa. Megalopae are pushed back into the estuary by wind and tidal currents, settling in key nursery habitats such as seagrass beds and marsh fringes.. Megalopae eventually metamorphose into immature crabs, which look like tiny adults. Immature crabs molt several times before they reach maturity, about 12 to 18 months after hatching. Few blue crabs live longer than three years.