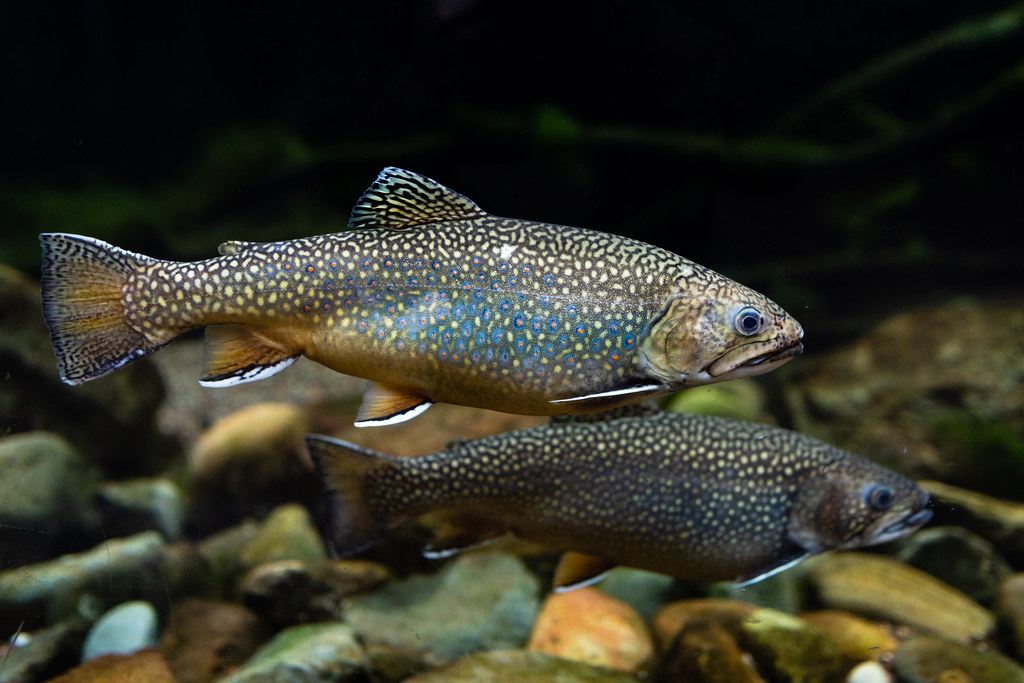 The brook trout is a brilliantly colored fish with a dark, olive green back with pale, worm-like markings; bluish sides with yellow and red spots; and a pale, yellowish-orange belly. Above, Dustin Wichterman of Trout Unlimited holds a brook trout in Pendleton County, W.Va., on May 2, 2014. (Photo by Steve Droter/Chesapeake Bay Program)

The brook trout is a brilliantly colored fish that lives in clear, cold freshwater streams and rivers in undeveloped areas throughout the Chesapeake Bay watershed.

Brook trout can grow up to 12 inches in length, but most are no more than 9 to 10 inches in length. Their body is typically wide in the middle and tapers at each end. Its dark, olive green back has pale, worm-like markings. Its sides are bluish with yellow and red spots. It has a pale, yellowish-orange belly; in breeding males, the belly is more vivid red or orange. The brook trout's lower fins are orange-red with a white front edge followed by a black strea. Its scaleless head has a rounded snout and large mouth.

Brook trout feeds on insects, tadpoles, salamanders, small crayfish and small water snakes. They also eat small fish and minnows if they are easy to catch.

Larger fish and birds such as ospreys and herons prey upon brook trout.

Spawning occurs in autumn, mainly in late October to early November, during the day. The female uses her tail to create a shallow, 1- to 2-foot-wide nest or “redd” in a clean, gravelly area and lays 100 to 400 eggs into the nest. The male fertilizes the eggs and then the female covers them with gravel. The eggs incubate over the winter and hatch in early spring. Brook trout reach maturity in 2 to 3 years and live to about 6 years of age.