A brown pelican flies near an uninhabited portion of Smith Island, Md., which pelicans use as a nesting site, on Oct. 27, 2014. Brown pelicans fly with their neck folded and head resting on their back. (Photo by Will Parson/Chesapeake Bay Program) USAGE REQUEST INFORMATION

A colony of brown pelicans roosts on an uninhabited portion of Smith Island, Md., which it uses as a nesting site, on Oct. 27, 2014. Brown pelicans live along beaches and shorelines near shallow waters. (Photo by Will Parson/Chesapeake Bay Program) USAGE REQUEST INFORMATION 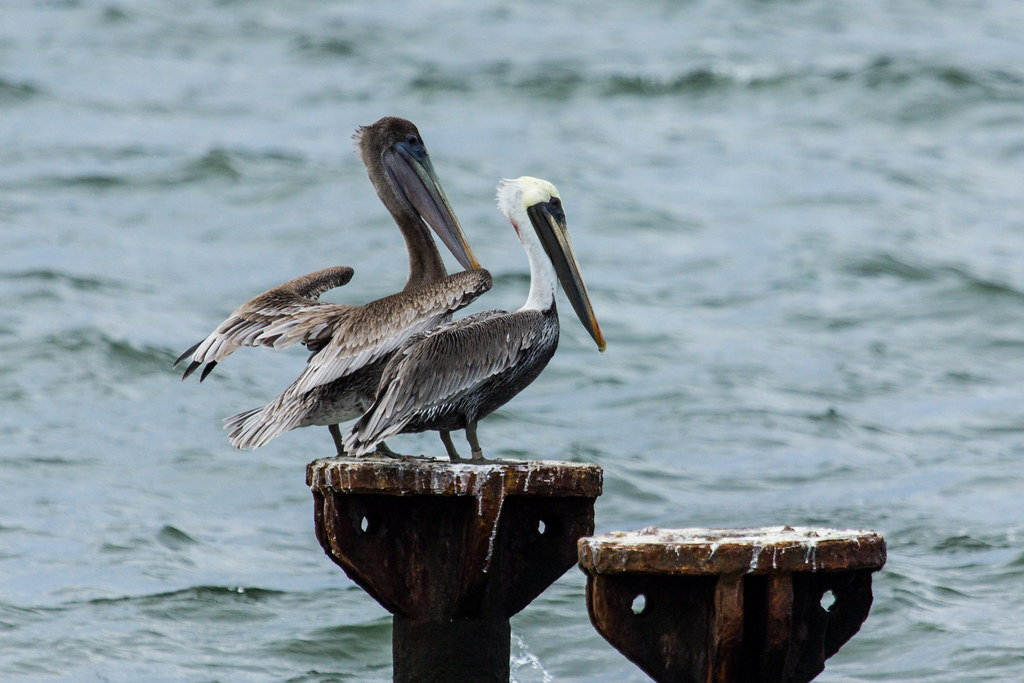 Brown pelicans visit near the lighthouse at Point Lookout State Park at the confluence of the Potomac River and the Chesapeake Bay in St. Mary's County, Md., on Oct. 22, 2013. (Photo by Steve Droter/Chesapeake Bay Program)

The brown pelican is a large, dark-colored water bird that lives along the shores of the middle and lower Chesapeake Bay during summer.

Brown pelicans grow to about 50 inches in length with a wingspan of 6 feet and weigh eight to ten pounds. Adults are mostly dark all over their body, with chesnut and white coloring on their neck and a pale yellow forehead. Their large, grayish bill is 9 to 15 inches in length, and there is an elastic throat pouch underneath the bill. Their legs and feet are grayish-black. Juveniles have a brown head and back with whitish underparks.

This bird feeds primarily on fish such as menhaden, herring, sheepshead and silversides and can eat up to 4 pounds of fish per day. It hunts by flying high above the water to find a school of fish, then diving head-first into the water to catch its prey. After catching a fish underwater, pelicans hold it (and a lot of water) in their throat pouch. Once they surface, pelicans point their bill downward to allow the water to drain out and then tilt their bill upward to swallow the fish.

Brown pelicans have no natural predators; their biggest enemies are humans, who have decimated pelican populations in the past.

Flocks of brown pelicans fly in a long, straight line or a V formation with synchronized wingbeats and gliding. Sometimes a pelican will fly low over the water’s surface, almost touching it with its wingtips. It flies with its neck folded and head resting on its back.

Adults are silent, with a rare low croak; nestlings squeal.

Breeding typically begins at age 3 to 5 years. Pelicans in large colonies on the ground, in bushes or in the tops of trees. The male brings nest materials to the female, who builds the nest. Females usually lay 2 to 3 chalky white eggs between March and May. Unlike most birds, pelicans incubate their eggs with their feet. Parents share the responsibility of incubating the eggs, which hatch in about a month, and raising the young. Pelicans are born blind, featherless and entirely dependent on their parents. First flight usually occurs around 75 days old.