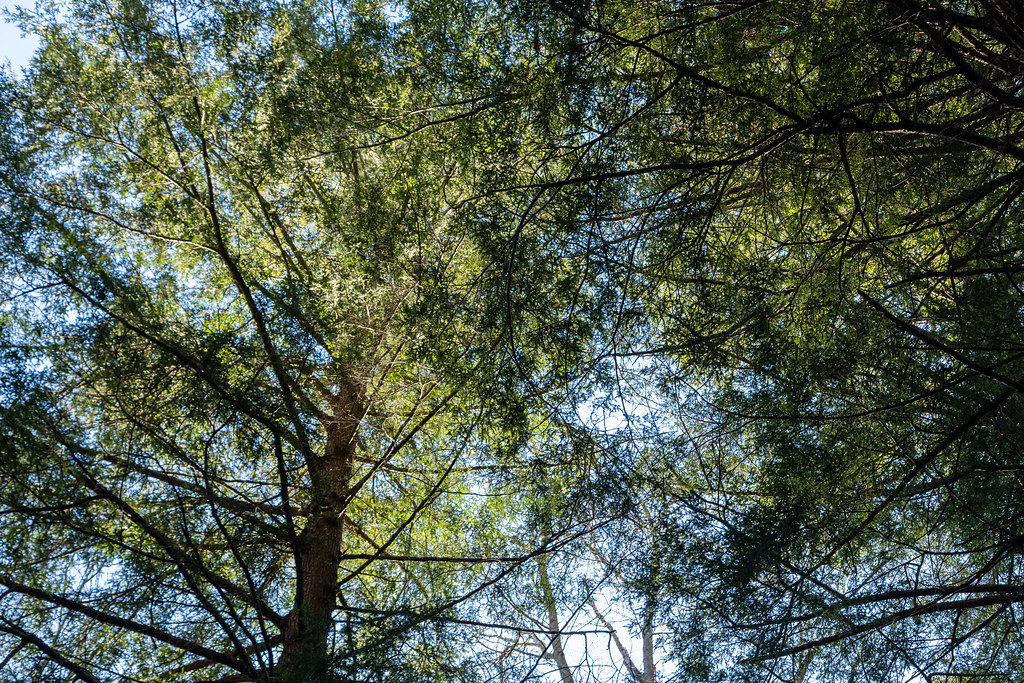 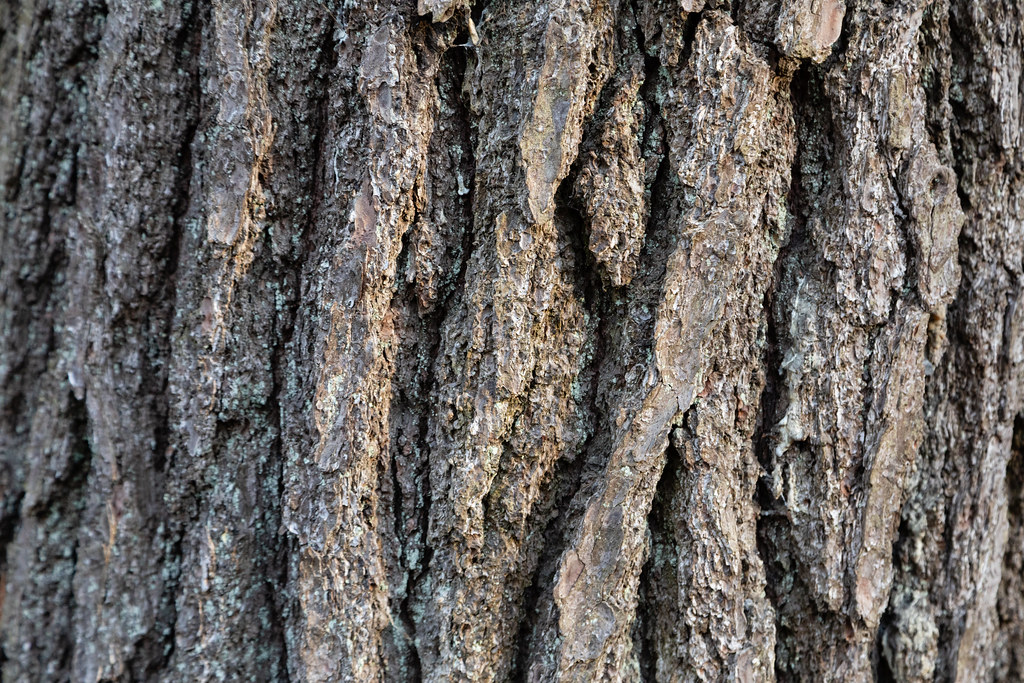 Eastern hemlock bark is seen along Poplar Lick Run as it flows through New Germany State Park in Garrett County, Md., on April 20, 2018. (Photo by Will Parson/Chesapeake Bay Program)

The hemlock woolly adelgid appears as white fuzzy balls at the base of eastern hemlock needles. (Photo courtesy of Claire O'Neill/iNaturalist CC BY-NC) 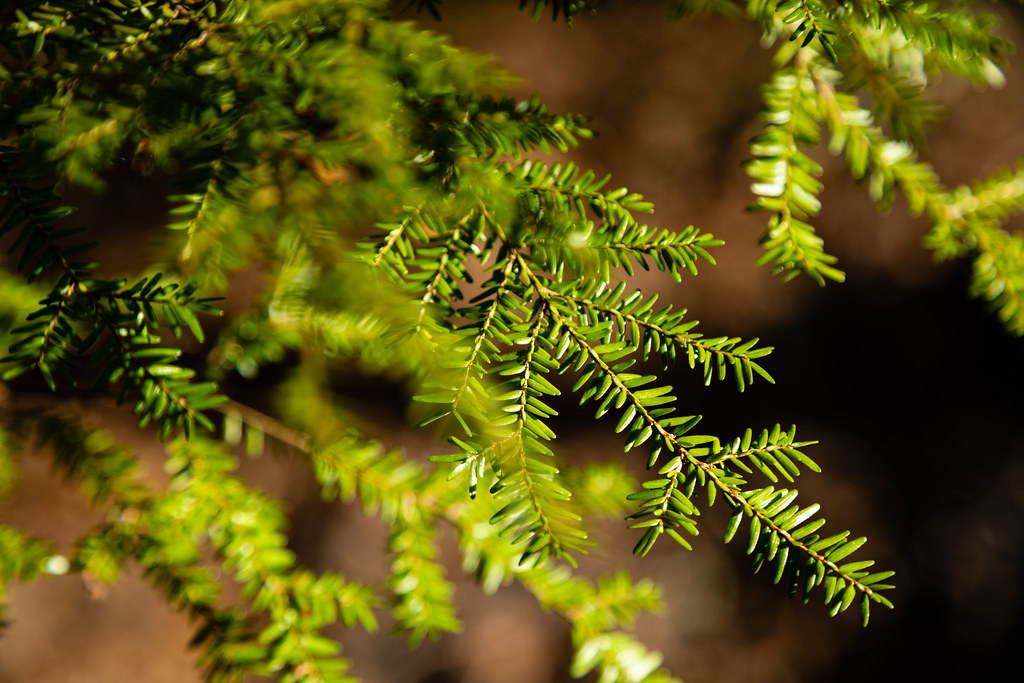 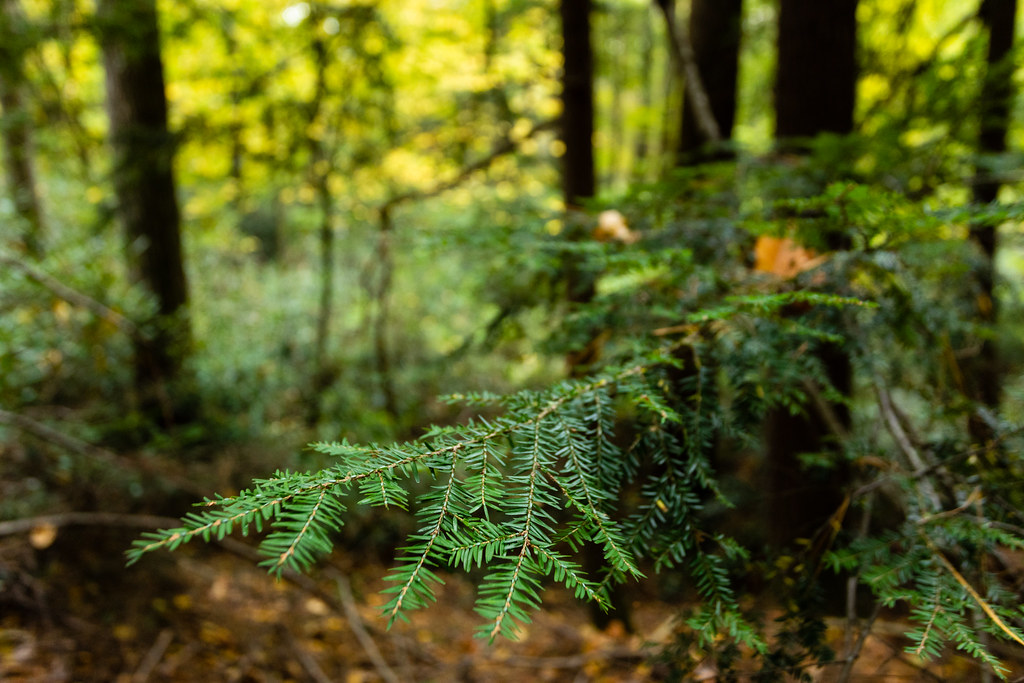 A healthy eastern hemlock tree is seen at Alan Seeger Natural Area in Huntingdon County, Pa., on Oct. 7, 2020. An invasive insect, the hemlock woolly adelgid, has attacked trees in the area, which holds a rare stand of old-growth hemlocks. The hemlock woolly adelgid causes an infested tree to drop its needles, and stressed trees can eventually die from heat and drought. Active management in Pennsylvania includes chemical treatment and biocontrols—essentially predatory beetles that eat the invasive insect. Keeping a forest healthy—by safeguarding its soils, water quality and biodiversity—plays a huge part in keeping trees resilient to the invaders. (Photo by Will Parson/Cheapeake Bay Program)

Eastern hemlocks are important riparian trees that can live for centuries.

The eastern hemlock can grow to be close to 200 feet tall with a seven-foot diameter trunk. The hemlock tree is an evergreen that maintains its needles year-round. The quarter to half-inch flat needles are rounded at the end and green on top with white bands on the underside. Young trees have dark and smooth bark in comparison to the cinnamon brown, thick bark of older trees. The branches tend to point downwards.

The hemlock woolly adelgid is an invasive species that is decimating hemlock forests across the east coast. The pest was introduced in the mid-1900’s and researchers are still working to find the best way to control its spread.
White-tailed deer, porcupines, snowshoe hares, northern flickers, black-capped chickadees and American goldfinches feed on the bark, branch tips and seeds of hemlock trees.

Hemlock trees need at least ten years to reach sexual maturity, some don’t produce seeds until they are 40 years old. Each tree produces both male and female flowers which are pollinated by the wind. The flowers appear in the spring, the cones ripen in the fall and release seeds in winter. Hemlock trees can grow to be more than 500 years old.