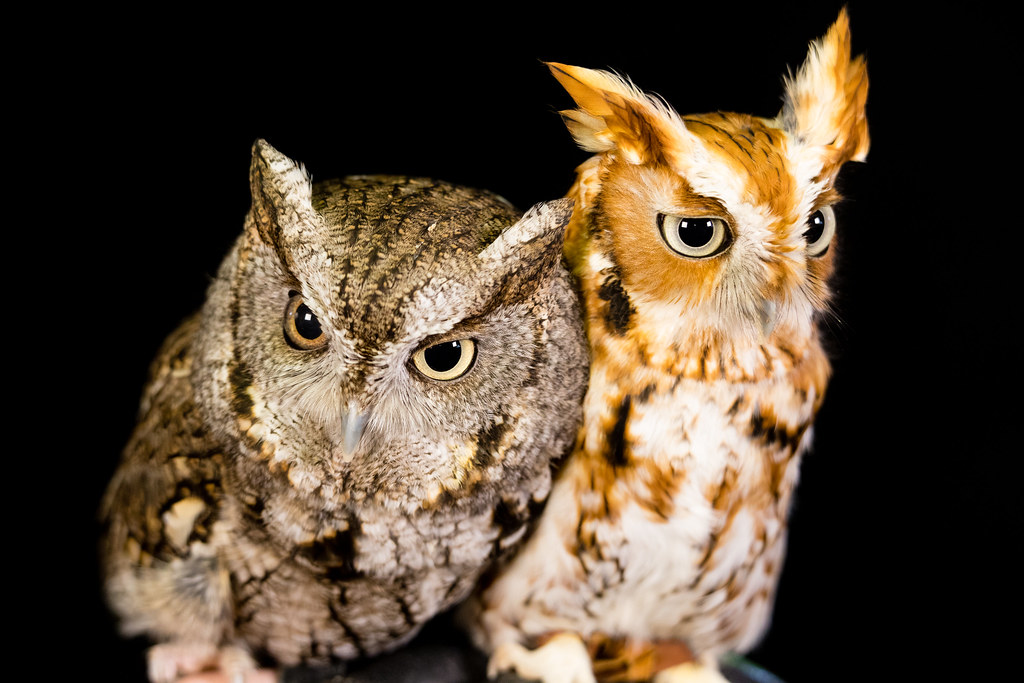 Non-releasable screech owls live in an aviary at Tuckahoe State Park in Caroline County, Md., on Jan. 17, 2018. Several such raptors, or birds of prey, travel throughout Maryland as part of the park's Scales and Tales educational program. (Photo by Will Parson/Chesapeake Bay Program)

Eastern screech-owls are cavity nesters. They never build their own nests but rather occupying natural hollows or even artificial bird boxes. (Image by Gregory Smith/Flickr)

Young owls leave the nest at about 28 days old and remain with the parents until they are 8 to 10 weeks old. (Image by Matt Tillett/Wikimedia)

Most flights are short (less than 75 feet). When traveling between perches, eastern screech-owls often drop, fly straight, and then rise again in a U-shaped pattern (Image by Michael Hodge, Flickr)

This small, well-camouflaged owl can be found year-round throughout forested areas of the Bay watershed.

Eastern screech-owls are small, from 6 to 10 inches in length with a wingspan of 19 to 24 inches. As with many owls, females are generally larger than males. They come in two distinct color morphs: gray and rufous (reddish-brown). Whatever color they are, they are patterned with bands and spots that act to camouflage them with tree bark. They have bold streaking on their breasts and "ear" tufts on either side of their head.

The Eastern screech-owl’s diet includes insects, invertebrates, amphibians and reptiles such as moths, katydids, crayfish, earthworms, tadpoles, frogs and lizards. They eat many kinds of mammals, including rats, mice, squirrels, moles and rabbits. Small birds taken as prey include flycatchers, swallows, thrushes, waxwings and finches, as well as larger species such as jays, grouse, doves, shorebirds and woodpeckers.

These owls have excellent hearing and can often capture prey hidden under leaves.

Eastern screech-owls are preyed on as adults and fledglings by larger owls, hawks and other eastern screech-owls. Eggs and nestlings may be taken by black rat snakes, Virginia opossums, raccoons and ringtails.

Most flights are short (less than 75 feet). When traveling between perches, eastern screech-owls often drop, fly straight, and then rise again in a U-shaped pattern.

The owl’s call is a mournful whinny or wail; tremulous, descending in pitch. Sometimes it is a series on a single pitch.

Eastern screech-owls form stable pairs—usually one male with one female, but occasionally one male with two females. Eastern screech-owl pairs usually are monogamous and remain together for life, but some makes might mate with two different females. The second female may evict the first female, lay her own eggs in the nest and incubate both clutches.

Breeding occurs once a year from February through March. The female lays her eggs on whatever debris is at the bottom of her nesting cavity, such as wood-chips, twigs or the feathers and droppings from a previous year’s nest (females re-use successful nesting sites).

Eastern screech-owl females incubate the eggs and brood the young (sit on the eggs for warmth and safety). Males feed females and guard nest cavities during incubation and brooding. Clutches usually contain 2 to 6 eggs with 27 to 34 days of incubation. The young leave the nest at about 28 days old and remain with the parents until they are 8 to 10 weeks old. Both parents feed the young during this period. It is estimated that only 30 to 50 percent of young from one year survive into the next year.