Fairy shrimp are small crustaceans that depend on vernal pools—bodies of water that dry up every year—to live and reproduce. (Photo courtesy Alex R/iNaturalist CC BY-SA) 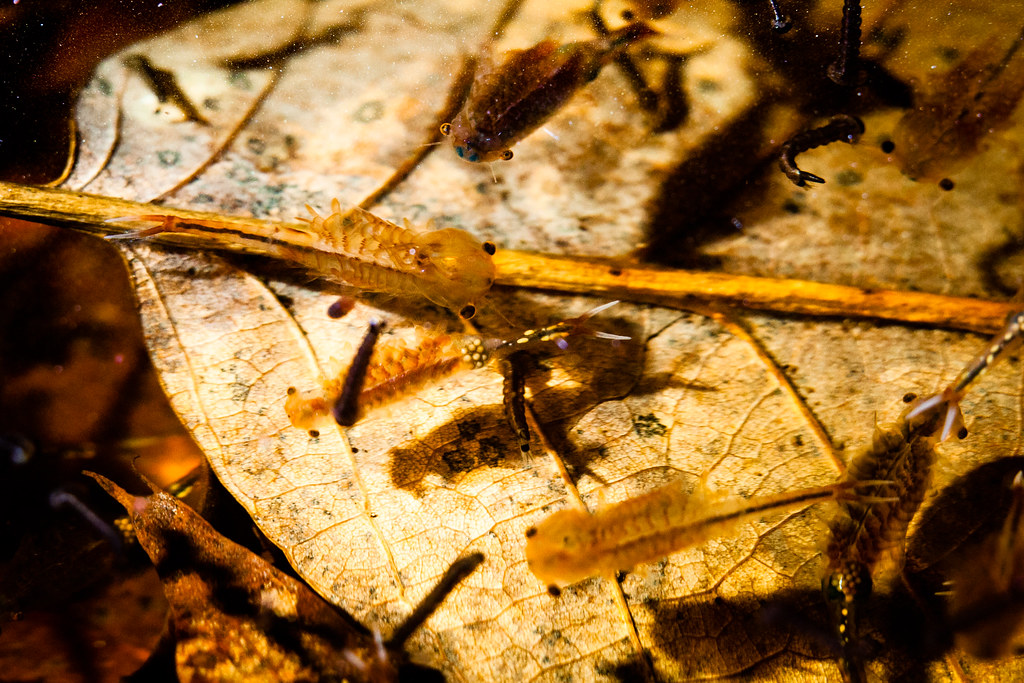 Fairy shrimp and mosquito larvae swim in a vernal pool at Forest Pools Preserve, adjacent to Kings Gap State Park in Cumberland County, Pa., on March 25, 2016. Because vernal pools, or seasonal wetlands, dry up every year, they don't harbor fish and thus are critical habitat for many amphibian species. (Photo by Will Parson/Chesapeake Bay Program)

Fairy shrimp are relatively large and slow-moving crustaceans that live in vernal pools throughout the Chesapeake Bay watershed.

Fairy shrimp are between 0.5 and two inches in length and have 10 pairs of leg-like appendages called phyllopods that are used for swimming. They swim slowly and belly-side up. Their diet affects their color—they are most often orange, but may also be white, blue or green. Females have smaller heads than the males.

Fairy shrimp are filter-feeders that scrape food off the bottom of their vernal pools. Their diet includes algae, flatworm eggs and Arcella—a genus of amoeba that have holes through their centers.

Vernal pools don’t host predatory fish, which make them a safe habitat for fairy shrimp. Waterfowl, frogs, salamanders and insect larvae eat other species of fairy shrimp and may be predators for Eubranchipus vernalis as well.

Fairy shrimp generally mate between April and May. Males die shortly after mating, while the females live until the pool dries up. The eggs are released into the water and remain dormant throughout the dry season. Once the pool fills with water again—often October or November—the eggs hatch. The larvae go through a variety of molts and gain body segments with each stage, reaching 20 segments as adults.