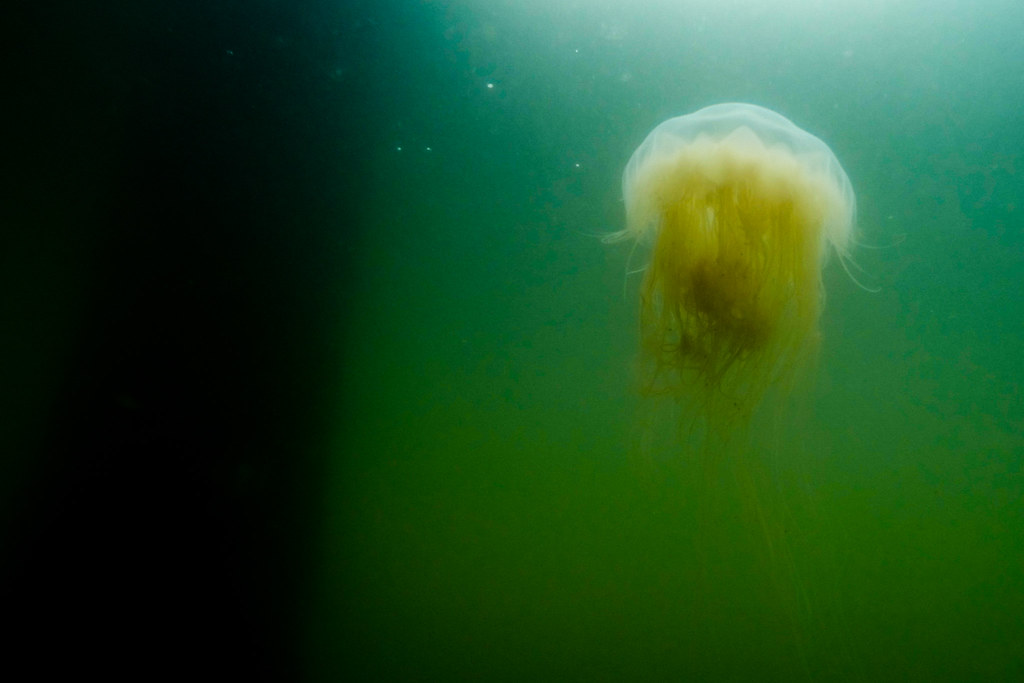 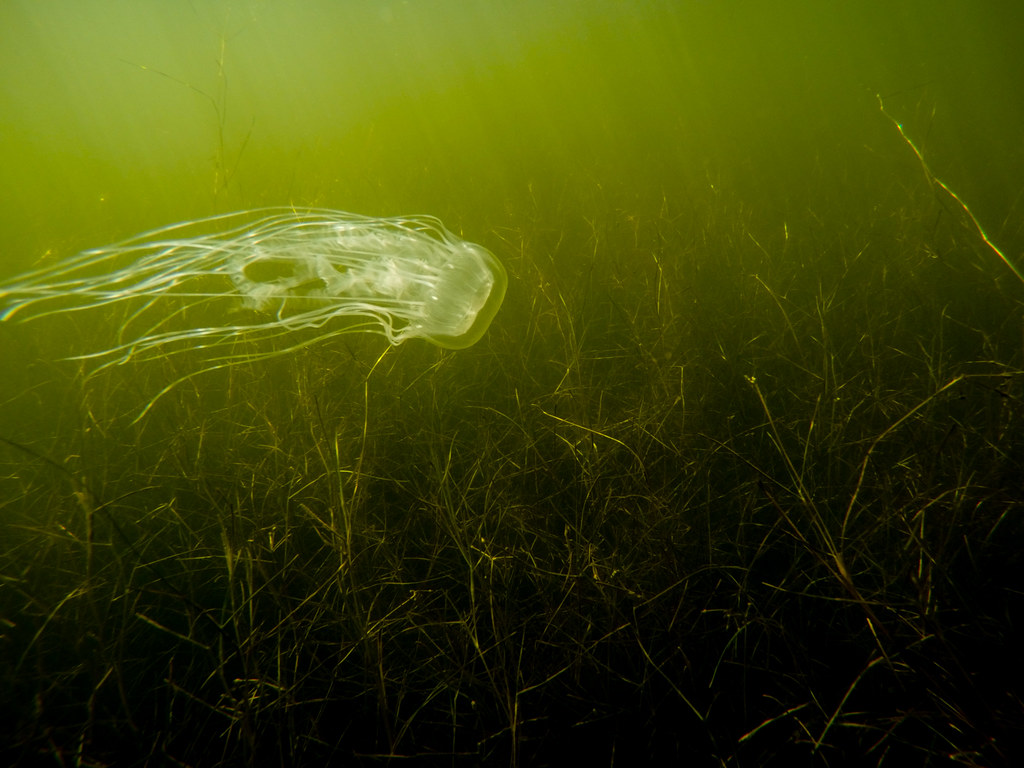 A sea nettle floats in the Severn River Sanctuary in Anne Arundel County, Md., on July 10, 2016. (Photo by Will Parson/Chesapeake Bay Program) 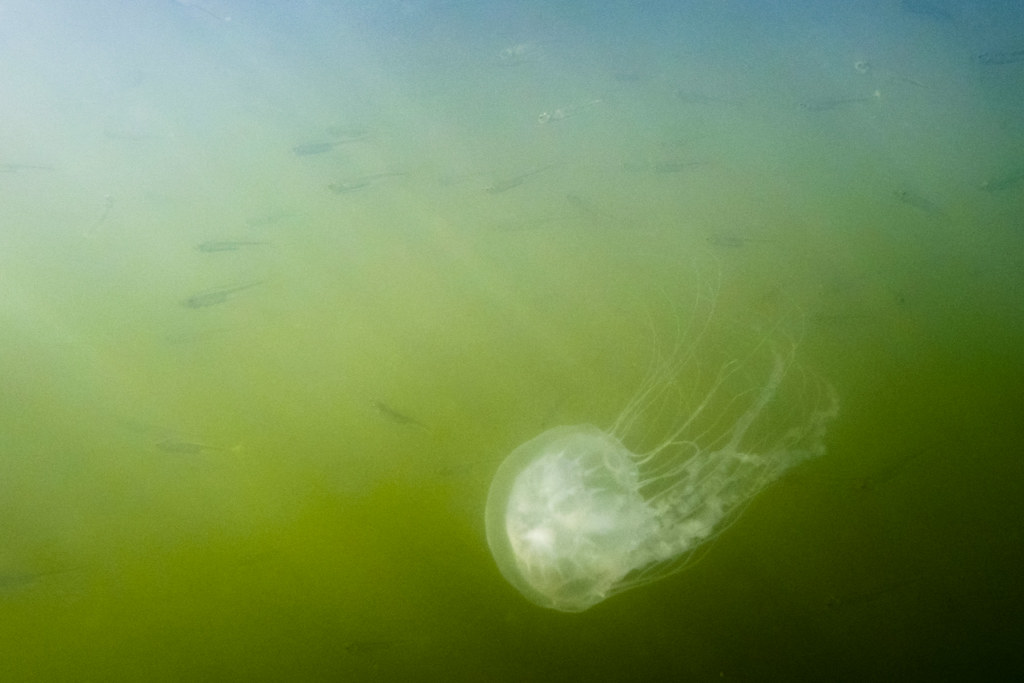 A school of Atlantic silverside swims past a sea nettle at Dogwood Harbor in Tilghman Island, Md., on Sept. 1, 2015. Sea nettles grow to about 4 inches in diameter and use their stinging tentacles to entangle, paralyze and capture fish, shrimp, and other small animals. (Photo by Will Parson/Chesapeake Bay Program) 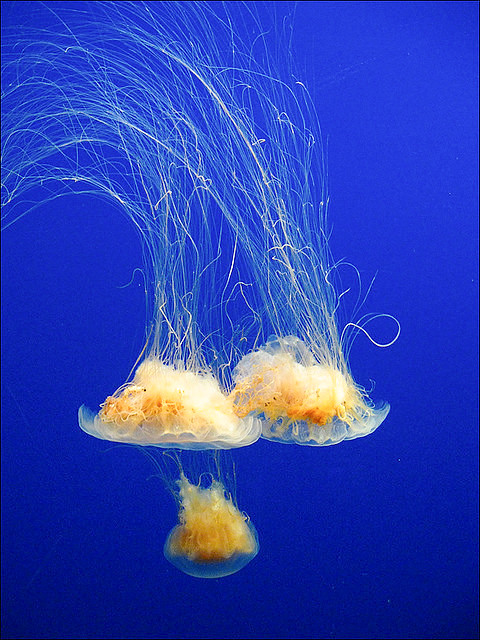 The lion’s mane jellyfish has a broad, flattened bell and eight clusters of short tentacles. (Elanna/Flickr) 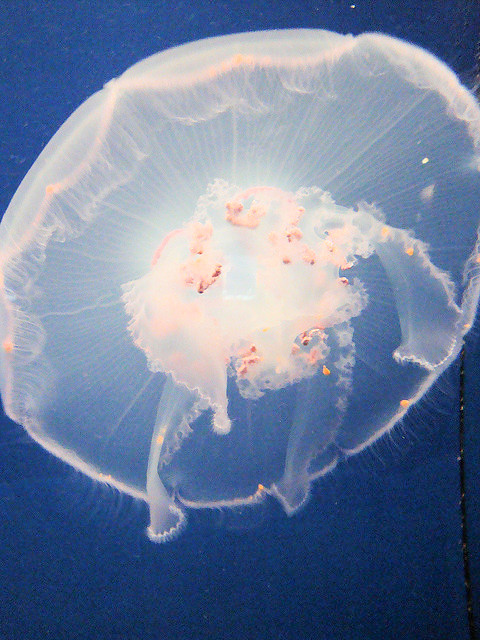 Hundreds of short tentacles hang like fringe from the edge of the moon jellyfish's bell. (Jim G/Flickr) 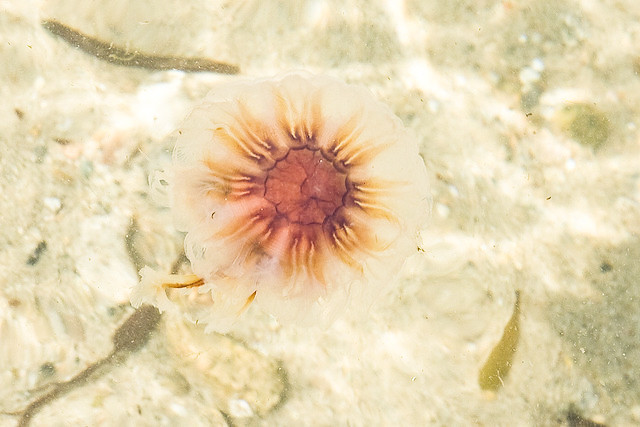 The lion's mane jellyfish's bell is usually orange-brown. It grows to about the same size as the sea nettle. (Eric Heupel/Flickr) 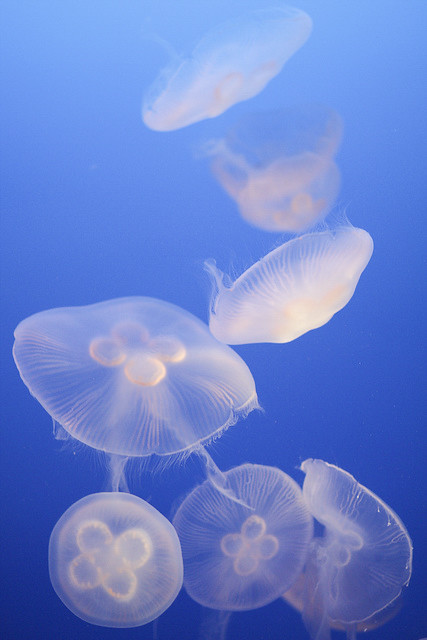 The moon jellyfish is the Chesapeake Bay’s largest jellyfish. It can grow 10-12 inches in diameter. (Takashi Hososhima/Flickr)

Jellyfish have a transparent, gelatinous body and an umbrella-shaped bell called a medusa. Tentacles with stinging cells hang from the bell. The stinging cells are called nematocysts.

Sea nettles have a smooth, milky white bell that grows to about 4 inches in diameter. Up to 24 tentacles hang from under the bell.

The moon jellyfish is the Bay’s largest jellyfish. It can grow 10 to 12 inches in diameter. Hundreds of short tentacles hang like fringe from the bell’s edge.

The lion’s mane jellyfish has a broad, flattened bell and eight clusters of short tentacles. The bell is usually orange-brown and grows to about the same size as the sea nettle.

Sea nettles and lion’s mane jellyfish prey upon fish, shrimp, comb jellies and other small creatures. They use their stinging tentacles to entangle, paralyze and capture their prey. Each stinging cell is like a barb that injects venom into its prey. Jellyfish then use their tentacles to move the food into their mouth, which is located under the center of the bell. Moon jellyfish eat plankton, including mollusks, crustaceans and copepods.

Sea nettles spawn in mid-summer. They die after spawning. Males release sperm into the water. Females’ eggs are fertilized as they swim and pump water through their body. After fertilization, eggs develop into tiny, free-swimming larvae called planulae, which the female releases into the water. Larvae float with the currents for a few days, then settle and attach to a firm surface. The larvae blossom into anemone-like polyps that bud and grow over the winter. By spring, the polyps develop tiny, floating medusae that are layered on top of one another. The medusae are eventually released into the water. The freely floating medusae (called ephyra) eventually grow tentacles and mature into adults.