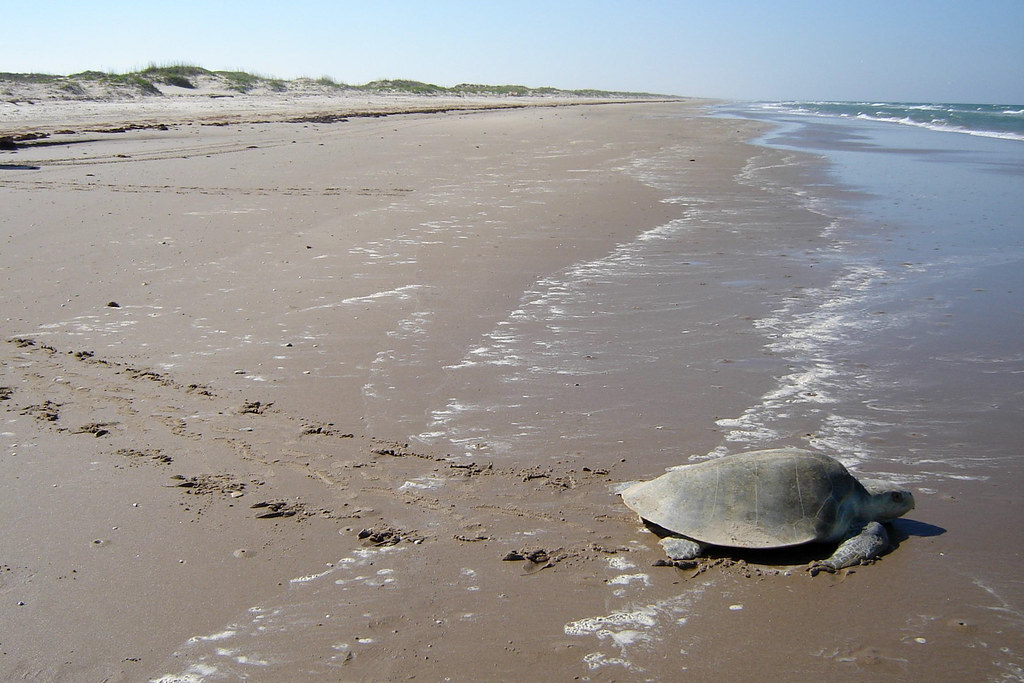 A Kemp’s ridley sea turtle crosses the beach at Padre Island National Seashore. This barrier island along the Texas coast, much of which is less than three feet above sea level, draws visitors as one of the only places in the world where the public can view turtle hatchlings being released into the wild. In 2008, visitors such as these and others to the seashore and recreation areas support nearly 1,000 local jobs and $16 million in wages. (Photo courtesy National Park Service) 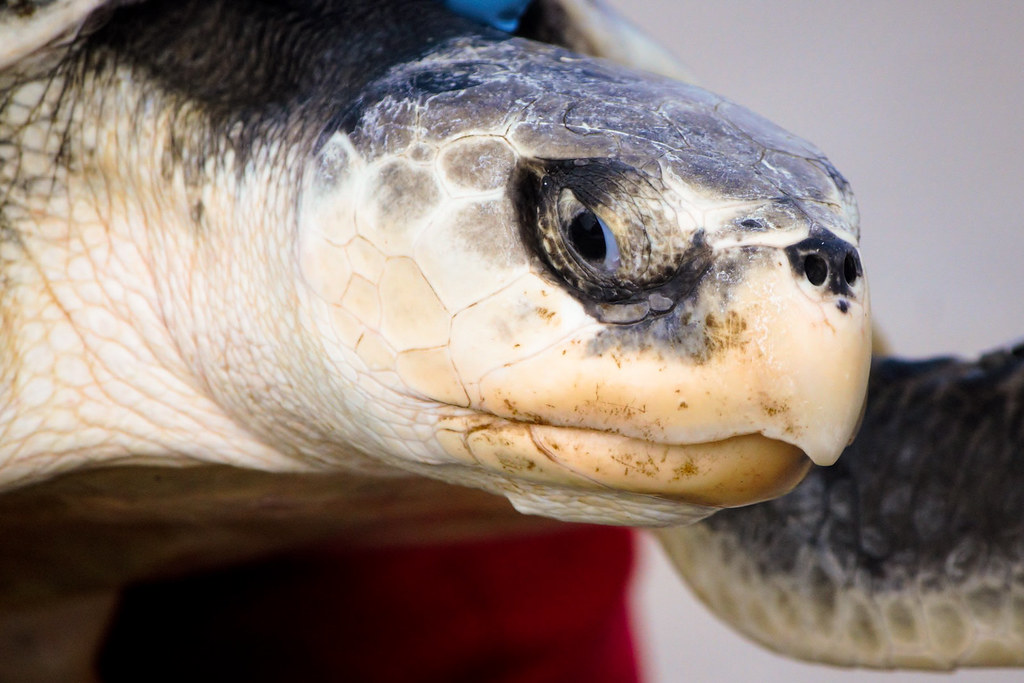 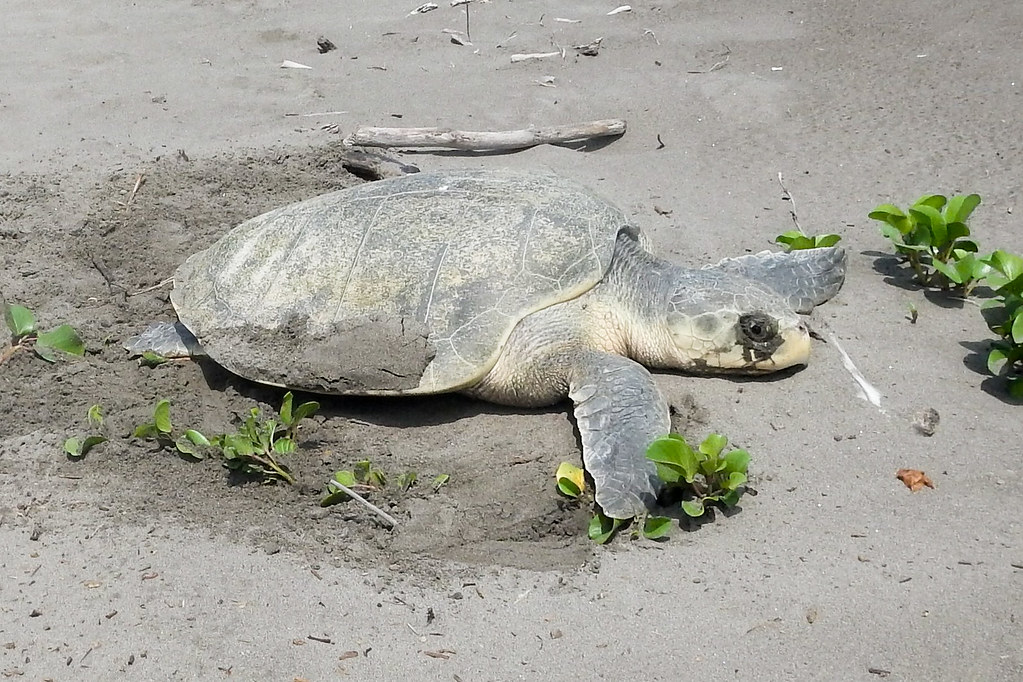 A Kemp's Ridley sea turtle female starts to dig a nest in which to lay its eggs in Veracruz, Mexico, on March 20, 2014. (Photo courtesy Fundación Yepez/iNaturalist CC BY-NC) 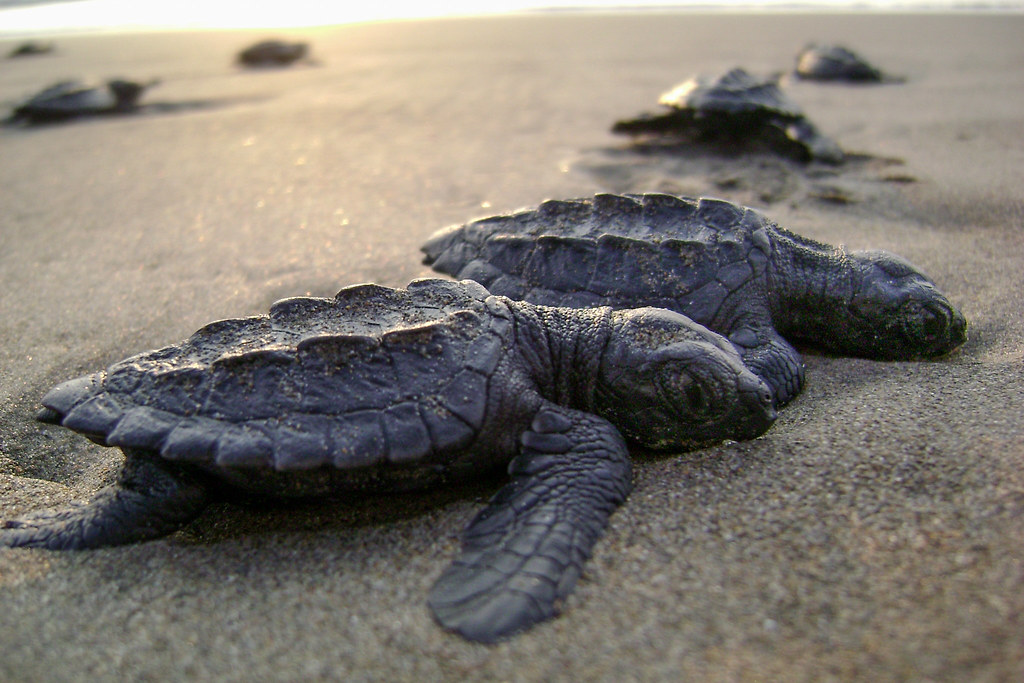 Kemp’s ridley is a critically endangered sea turtle with creamy skin and grey/olive limbs. It feeds on blue crabs in the Chesapeake Bay in the summer.

The Kemp's ridley is the smallest sea turtle. Its carapace (shell) measures between 15 and 24 inches in length, and adults weigh between 75 and 100 pounds. It has an oval or heart shaped shell and one large claw on each fore-flipper. Its skin color ranges from creamy to white, and its head and limbs are gray or olive. The tail of adult male Kemp's ridley sea turtles extends out longer than the tails of adult females. The eggs of Kemp's ridley sea turtles are perfectly round, with a leathery shell and are about the size of a ping pong ball. Hatchlings are solid grey-black, but as they grow into juveniles, the bottom shell turns white

Kemp’s ridley sea turtles are opportunistic hunters, but their favorite food is blue crabs, as well as fish, sea urchins, squid and jellyfish. They have powerful jaws that help them to crush and grind crabs, clams, mussels and shrimp.

Hatchlings can be preyed upon by birds, mammals and crabs when they are crawling to the open ocean after emerging from their nests. The main threat facing Kemp’s ridley sea turtles, however, is human activity. During the 1940s through the 1960s, large scale exploitation of eggs and meat occurred until the Mexican and Texas governments joined forces to protect the remaining population. Now, these turtles are threatened by poor fishing practices, propeller wounds, development of their key nesting beaches entanglement in fishing gear, and dredges in the Gulf of Mexico and northwest Atlantic. Marine turtles also suffer from ocean pollution and marine debris. They can easily mistake fishing line, balloons, plastic bags, and other plastic debris for food.

Kemp’s ridley sea turtles nest every one to three years, and lay an average of 110 eggs in each nest, laying two to three clutches each season. The nesting season for the Kemp’s ridley sea turtles runs from April to July. Their nesting pattern is called arribadas, in which massive populations of turtles synchronize their nesting times and arrive together. The eggs incubate for about 55 days, until the hatchlings emerge and crawl toward the open ocean. Hatchlings spend two to 10 years in an open ocean environment, traveling hundreds of miles until they reach sexual maturity and return to the same beach they hatched from.