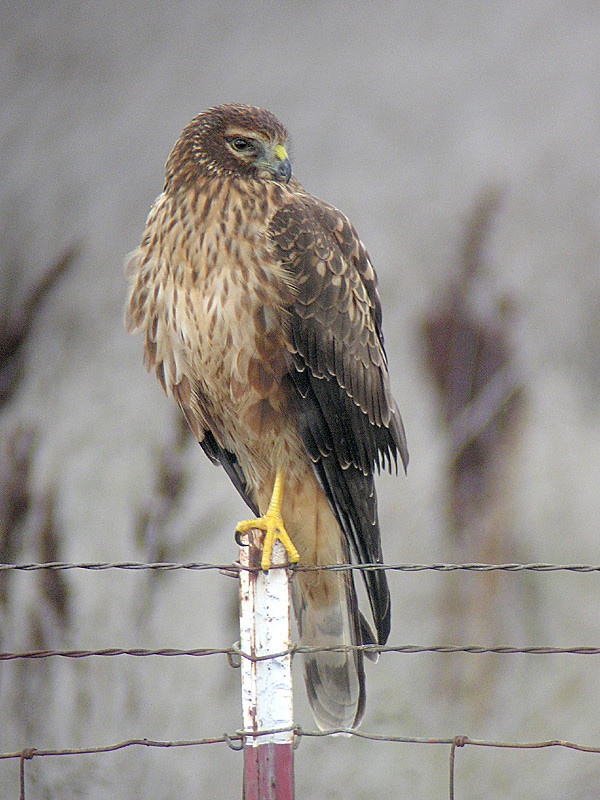 The northern harrier has a flat, owl-like face and a small, sharply hooked beak. (Len Blumin/Flickr) Also known as the hen harrier or marsh hawk, the northern harrier can be found in Chesapeake Bay marshes during winter, flying low to hunt for prey.

The northern harrier is a slender, medium-sized raptor with long, broad wings and a rounded tail. These birds have flat, owl-like faces, yellow legs and small, sharply hooked beaks. Females are larger than males, though both sexes have black-banded tails and white rumps. When viewed from above, males appear gray. When viewed from below, they appear white. Females and immature birds are brown with white undersides.

Northern harriers rely on vision and hearing to capture prey and fly low to the ground while hunting. They feed on small mammals, reptiles, amphibians and birds.

While flying, northern harriers hold their wings in a V-shape and have a low, slow coursing style of flight.

Calls include a long, rapid series of kek notes and a soft, chuckling call at the nest.

Breeding takes place in wide open habitats between April and July. While courting, males perform elaborate flying barrel rolls to impress females. Males can have as many as five mates at once, though most have only one or two. Nests are concealed on the ground in grasses or wetland vegetation. Northern harriers roost in loose colonies of 10 to 100 birds. Females lays three to six eggs and incubate them for 29 to 31 days. Males provide food to mates and offspring while females incubate eggs and brood chicks. Chicks fledge at 29 to 42 days. Sexual maturity is reached around two to three years, and lifespan can be up to 15 years.