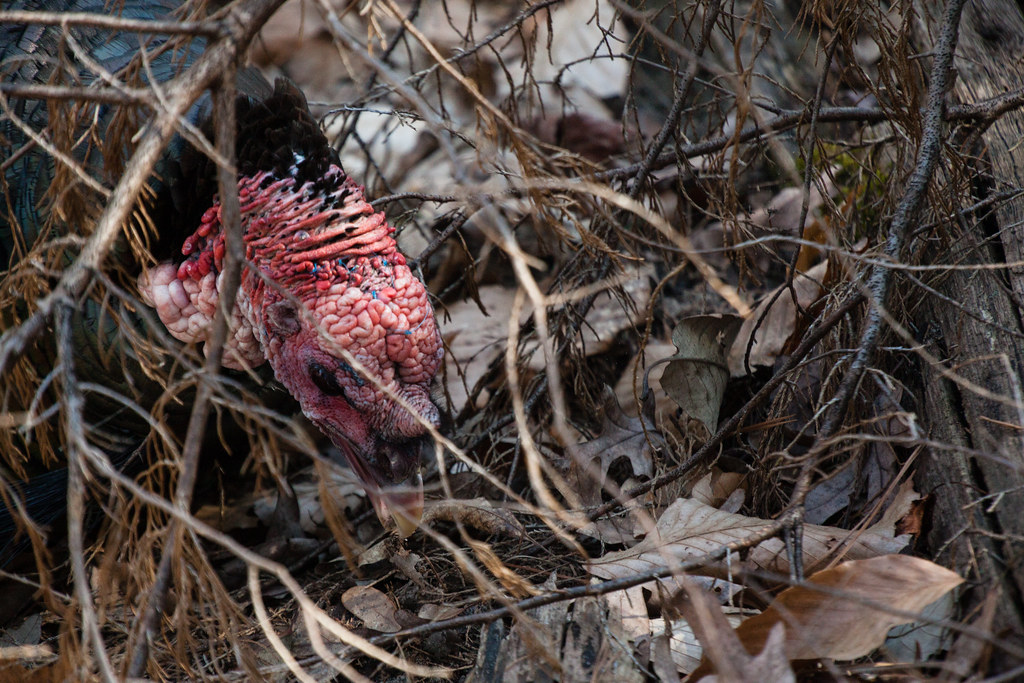 A wild turkey resides at the Virginia Living Museum in Newport News, Va., on March 9, 2016. (Photo by Will Parson/Chesapeake Bay Program) 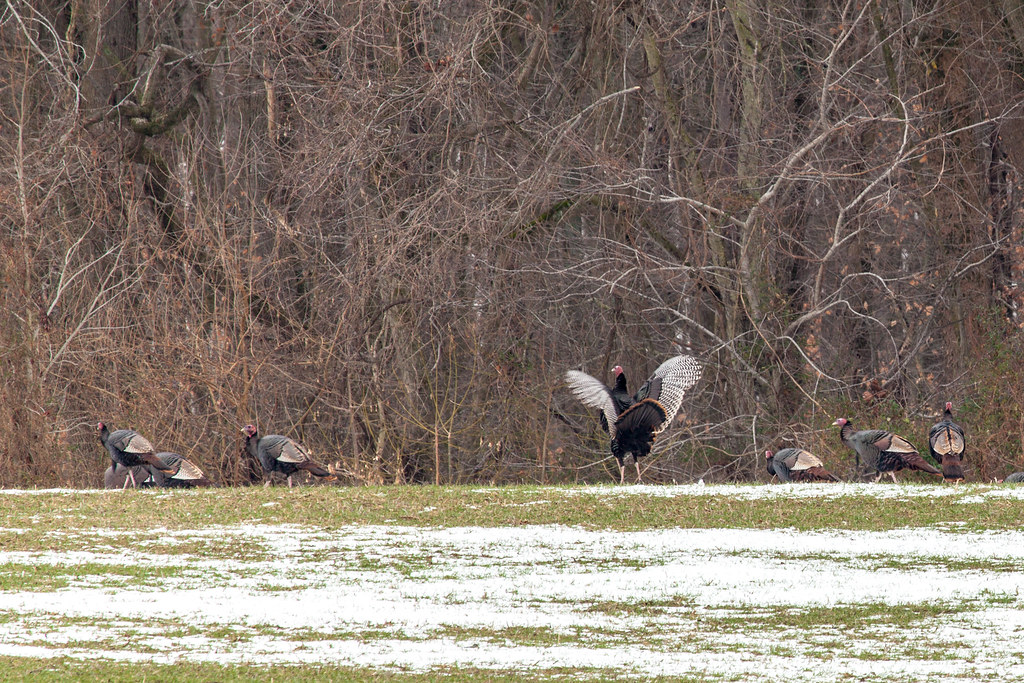 Male wild turkeys have a dark, iridescent plumage, a tuft of feathers called a beard on the chest, and a bare red, blue or white head. (Dimus/Wikimedia Commons)

Female wild turkeys have a duller overall color than males, and lack a wattle and beard. (cruadinx/Flickr)

During courtship, breeding males will fan their tail out to attract a female. (Alan Vernon/Flickr)

Wild turkey tracks are a common sight in the snow in open, wooded areas throughout the Bay watershed. (Tim Engleman/Wikimedia Commons)

The wild turkey is a large, dark, ground-dwelling bird with a long neck and a fan-shaped tail. It lives in open, wooded areas throughout the Chesapeake Bay watershed.

Wild turkeys have iridescent brownish or blackish plumage. Male turkeys have a bare head and neck. The neck is bluish-gray and the head is red, blue or white depending on the season. The head and neck are covered in hair-like feathers. Males have a fleshy, wart-like appendage called a caruncle between the eyes and a pink or red lobe of skin called a wattle that hangs from the neck or chin. The breast feathers are tipped in black, and males have a tuft of rough, black feathers called a beard on their chest. The beard grows throughout the turkey’s life at a rate of about four inches per year. Adult male beards can be eight to 12 inches in length. The tail is large and fan-shaped tail with a brown tip. Short, rounded wings with black and white bars. Long, powerful legs that vary in color from pink to gray. Males have sharp, bony spikes called spurs on the back of each leg. Spurs on the back of males’ legs grow throughout the turkey’s life. Scientists and hunters use spurs to estimate a turkey’s age.

Turkeys forage on the ground by scratching with feet to uncover food; they feed two to three hours after dawn and before dusk.

Humans are the largest predator of wild turkeys. Bobcats, raccoons, eagles and owls also prey upon adult turkeys. Many types of birds, snakes and mammals feed on turkey eggs

Turkeys can fly very swiftly; some have been recorded flying at speeds up to 55 miles per hour.

Males make a loud gobbling sound during courtship. They are known to make at least 15 different types of calls, including yelps and clucks.

Turkeys mate in early spring. Males perform an elaborate courtship ritual to attract females. The ritual includes gobbling loudly, fanning out their tail, strutting around the females, and dragging their wing tips on the ground. Males can change the color of their head during breeding season to attract a mate and show dominance over other males. Wild turkeys often locate their nest at the base of a tree that offers overhanging cover. Females begin laying one egg per day in mid-April. They lay a total of approximately 12 eggs, which they incubate for about four weeks. Eggs usually hatch around the first week of June. Males do not help care for the young. Young chicks follow their mother out of the nest within one day of hatching. They quickly learn to feed themselves, and can fly by the time they are eight days old. Young males stay with the female through autumn, and young females stay until the following spring.

On average, wild turkeys only live less than two years. However, some have been known to live as long as 13 years.