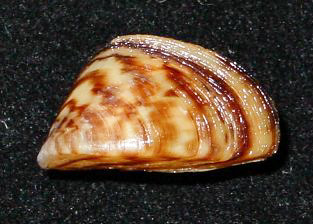 The zebra mussel is a tiny bivalve with zebra-like stripes on its triangular shell. (U.S. Geological Survey) 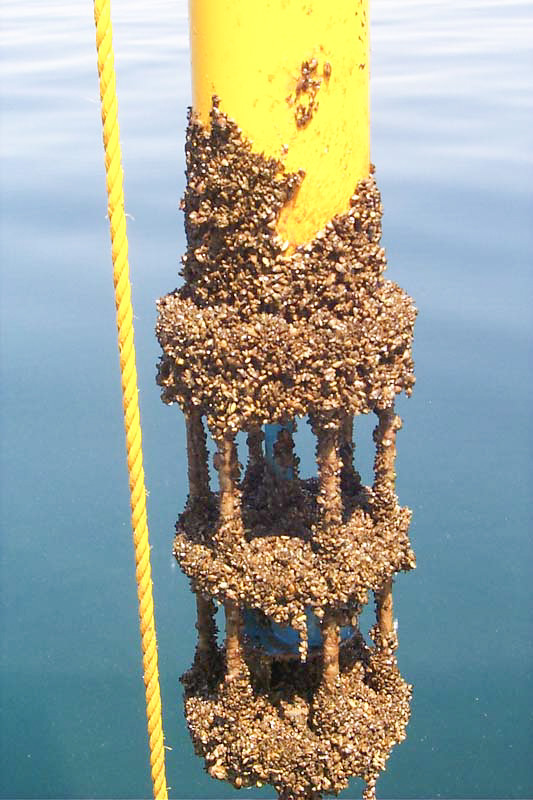 The zebra mussel is a tiny bivalve with zebra-like stripes on its triangular shell. It lives in freshwater lakes, rivers, streams and reservoirs in parts of the Chesapeake Bay watershed. It is a non-native and invasive species.

The zebra mussel usually grows to less than one inch in length. Its D-shaped or triangular shell is patterned with dark (usually brown) and light stripes. The shell's flattened bottom allows the zebra mussel to stand up straight on a flat surface.

This stationary filter feeder draws in water through a siphon in order to filter out plankton and other food particles. Unused particles are ejected through a second siphon.

Spawning occurs once water temperatures warm in spring and summer. Females can release more than one million eggs into the water in a single spawning season. Free-swimming larvae drift in the water for a few months, during which time currents transport them throughout river systems. Larvae anchor themselves to hard surfaces with thin, strong threads secreted from a gland on the foot. Young often settle on top of older, bigger mussels, forming large colonies. Zebra mussels typically live three to nine years, although some can live as long as 15 years.