Matt Ashton of the Maryland Department of Natural Resources holds a bluegill, the host fish for the eastern floater, at Buzzard Point on the Anacostia River in Washington, D.C., on March 28, 2019. Ashton, along with Jorge Bogantes Montero of the Anacostia Watershed Society, conducted a pilot project to infest bluegill and other sunfish with mussel larvae, known as glochidia. Eight species of freshwater mussels have been found living in the Anacostia River, and five are on the District's list of species of greatest conservation need. (Photo by Will Parson/Chesapeake Bay Program) 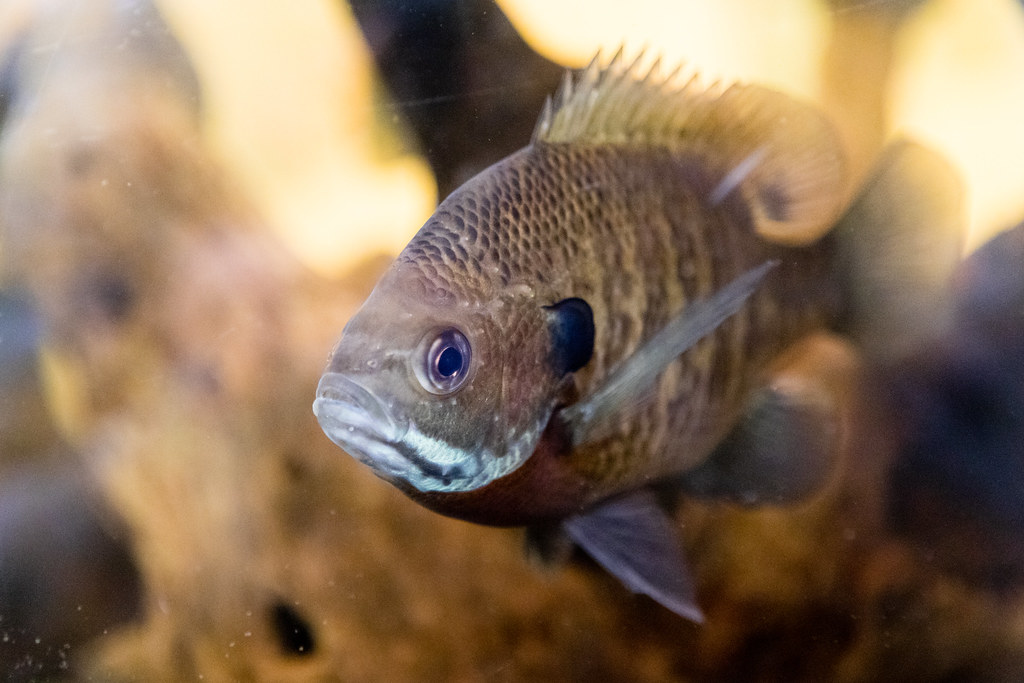 A bluegill resides at the Trap Pond State Park visitor center in Sussex County, Del., on Oct. 6, 2017. (Photo by Will Parson/Chesapeake Bay Program) 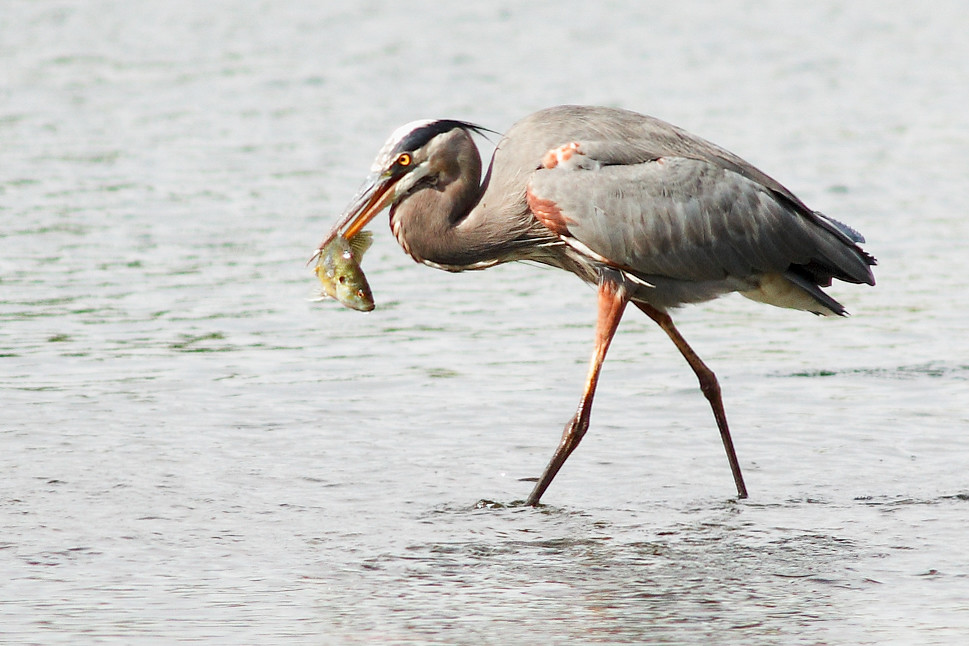 Fish-eating birds such as great blue herons prey upon bluegills. 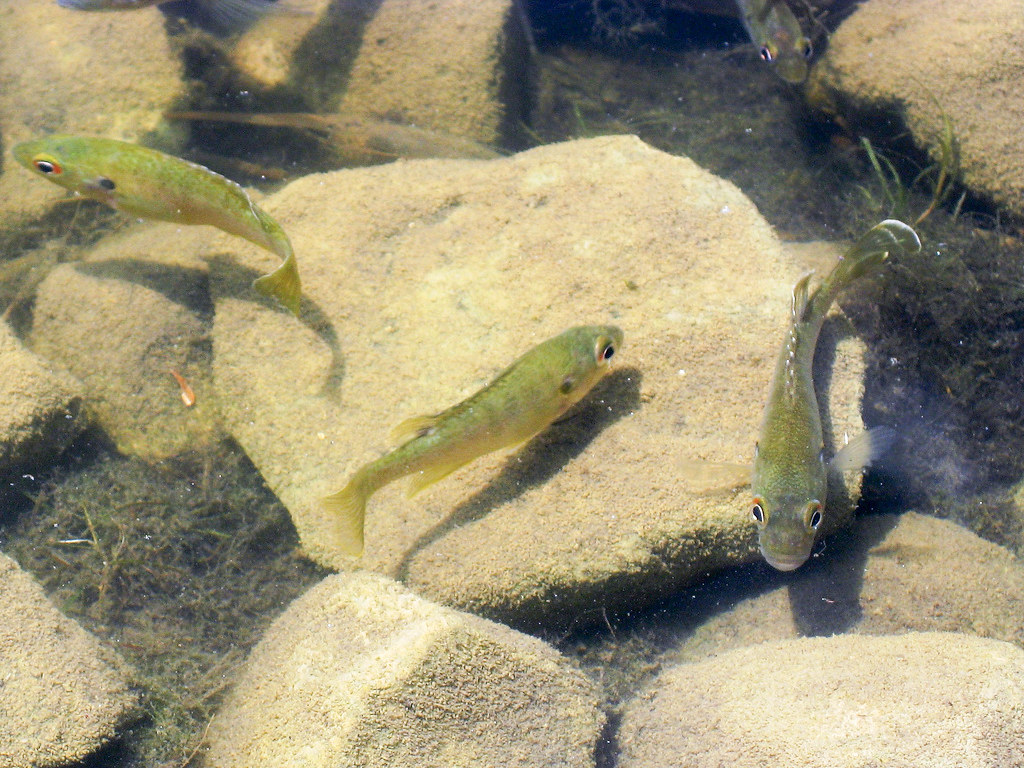 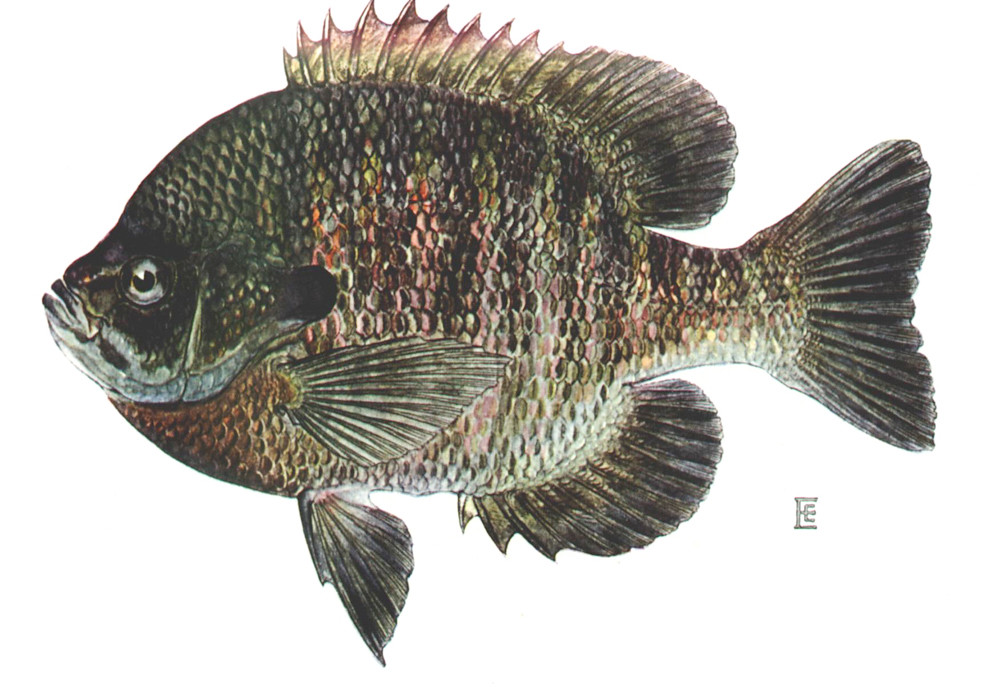 The bluegill is a colorful sunfish with an olive green, saucer-shaped body. (New York State Department of Environmental Conservation)

The bluegill is a colorful sunfish with an olive green, saucer-shaped body. It lives in lakes, ponds, streams and other freshwater bodies throughout the Chesapeake Bay watershed.

The bluegill has a compressed, saucer-shaped body. It is mostly olive green with an orange to yellowish belly and bluish-purple iridescence on its cheeks. It has black earflaps and faint vertical bars on its sides. Its slightly forked tail fin has rounded lobes. The dorsal fin has about 10 spines on the front portion, and the back portion is rounded with a dark smudge at the base. Bluegill usually grow 4 to 6 inches in length, but can grow to 12 inches long.

The bluegill eats a variety of small organisms, including insects, crayfish and bits of vegetation. They prefer quiet, slow-moving waters with lots of vegetation and a sandy, muddy or gravel bottom. In winter, schools form in deeper river channels.

Spawning occurs from April to September, once water temperatures warm to about 54 degrees Fahrenheit. Bluegill often spawn more than once per season. Males build nests in shallow areas by making a round hole in the sand or gravel. Bluegills will often build nests close to one another, creating colonies. The female lays several hundred eggs into the nest. The male fertilizes the eggs, then guards them from other fish and predatory insects. He uses his tail to fan away any particles or detritus that could smother the eggs. Bluegill can live to 11 years old.