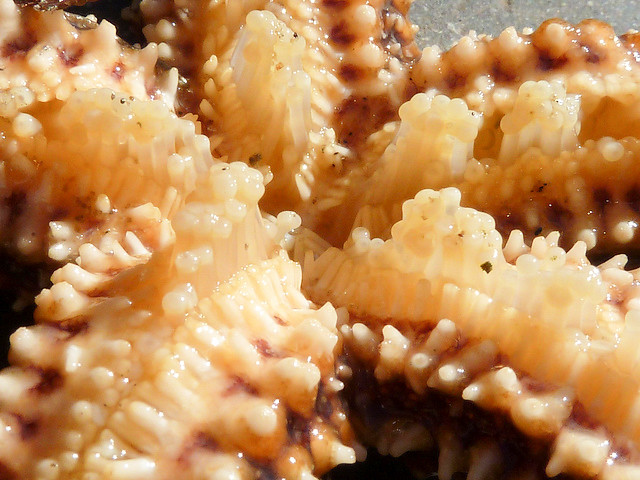 If a sea star loses an arm, it can quickly grow a new one. (Bill Frank/www.jaxshells.org)

The common sea star is a spiny-skinned echinoderm with five pointed arms. It lives mainly on rocks, jetties and pilings in the shallow, salty waters of the lower Chesapeake Bay.

ommon sea stars have five pointed arms and hundreds of tiny tube feet on their pale undersides. They vary in color from yellowish-orange to deep purple, and have small, pale spines that give them a rough appearance. A bright red or orange "eye" spot appears in the center of its body. They grow to be approximately five inches.

The common sea star eats snails, clams, oysters, mussels and barnacles. It feeds by latching its tube feet onto its prey’s shells, then prying the shells open just enough for the sea star to reach its stomach inside.

Due to its tough, spiny skin, the common sea star has few predators.

The sea star spawns by releasing eggs and sperm into the water, where the eggs are fertilized. Females can release up to 2.5 million eggs. Fertilized eggs develop into free-swimming larvae. After about three weeks, the larvae settle and morph into adults.