The seaboard goby (Gobiosoma ginsburgi) is brownish with whitish crossbars. Dark, irregular spots form a line along either side of the body. (Photo courtesy Robert Bachand)

A naked goby (Gobiosoma bosc) is seen inside its nest in an oyster shell. (Photo courtesy Robert Bachand)

A goby male guards its nest of eggs inside an oyster shell. (Photo courtesy Robert Bachand)

Naked gobies are dark greenish-brown with 8-10 light bars running along the sides. They are the most abundant goby species in the Chesapeake Bay.. (Photo courtesy of Robert Bachand) 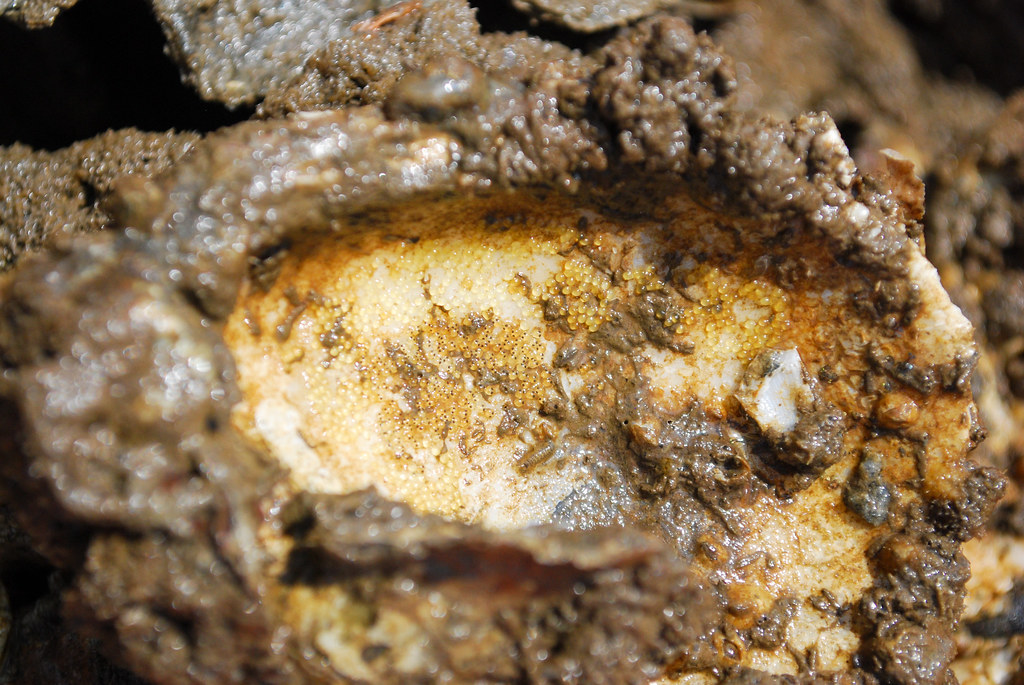 Oysters on the Tred Avon River in Talbot County, Md., reveal an array of wildlife that use oyster reefs for habitat on Aug. 10, 2009. Above, goby eggs attach to an oyster shell. (Photo by Alicia Pimental/Chesapeake Bay Program)

Oysters on the Tred Avon River in Talbot County, Md., reveal an array of wildlife that use oyster reefs for habitat on Aug. 10, 2009. Above, a goby is hauled up with a clump of oysters. (Photo by Alicia Pimental/Chesapeake Bay Program)

Gobies are small, secretive fish that live in the Chesapeake Bay year-round, mostly among oyster reefs.

The goby's elongated body grows to 2 inches in length. It has a large mouth with large, closely set eyes on the top of its head. It has two separate dorsal fins and fused pelvic fins that act as suction discs. Naked gobies are scaleless and a dark greenish-brown color with 8 to 10 light bars running along their sides. Seaboard gobies are brownish with whitish crossbars, and dark, irregular spots form a line along either side of their body. They have only two scales on each side of the base of their tails. Green gobies are the most colorful of the three species: males are greenish-blue with a reddish dorsal fin, orange-yellow pelvic fins, and a white-edged anal fin with dark spots on the border, and females have a gold head, gold-blue bands underneath the eyes, bluish-green sides, and a large black spot on the back of the dorsal fin. Green gobies have scales on the back part of their body.

Larger fish such as striped bass, bluefish and weakfish prey on gobies, who hide from predators within the small crevices of oyster reefs.

Spawning occurs in May to November. Females lay bundles of small, amber-colored eggs inside of empty oyster shells. Males aggressively guard the eggs until they hatch. Free-swimming naked goby larvae may migrate upstream and school over oyster reefs before settling. Naked gobies may live for four years.