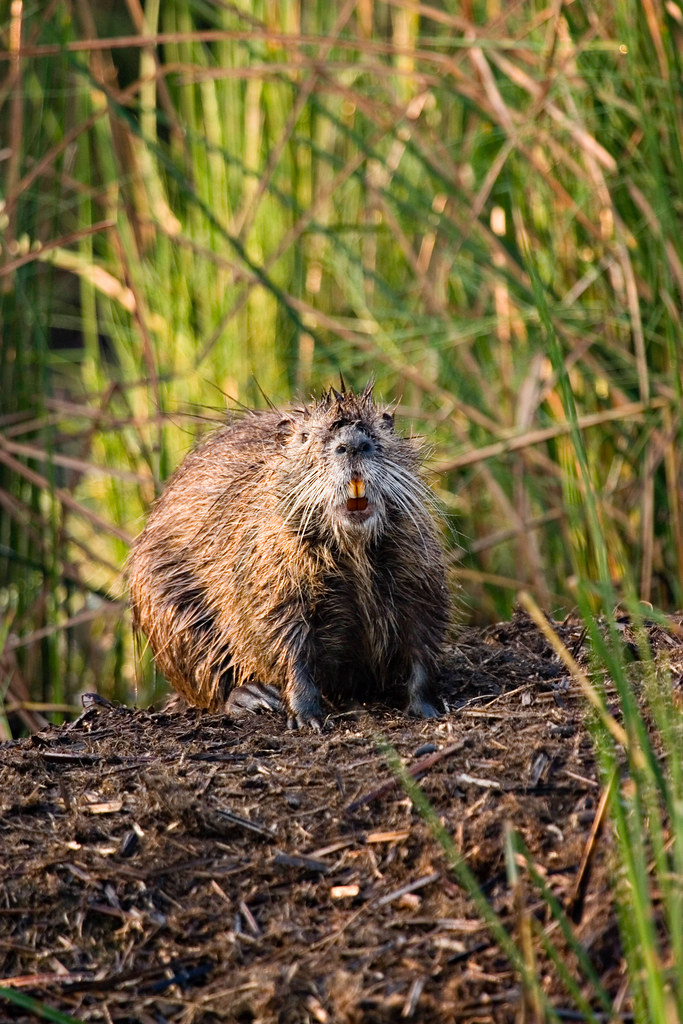 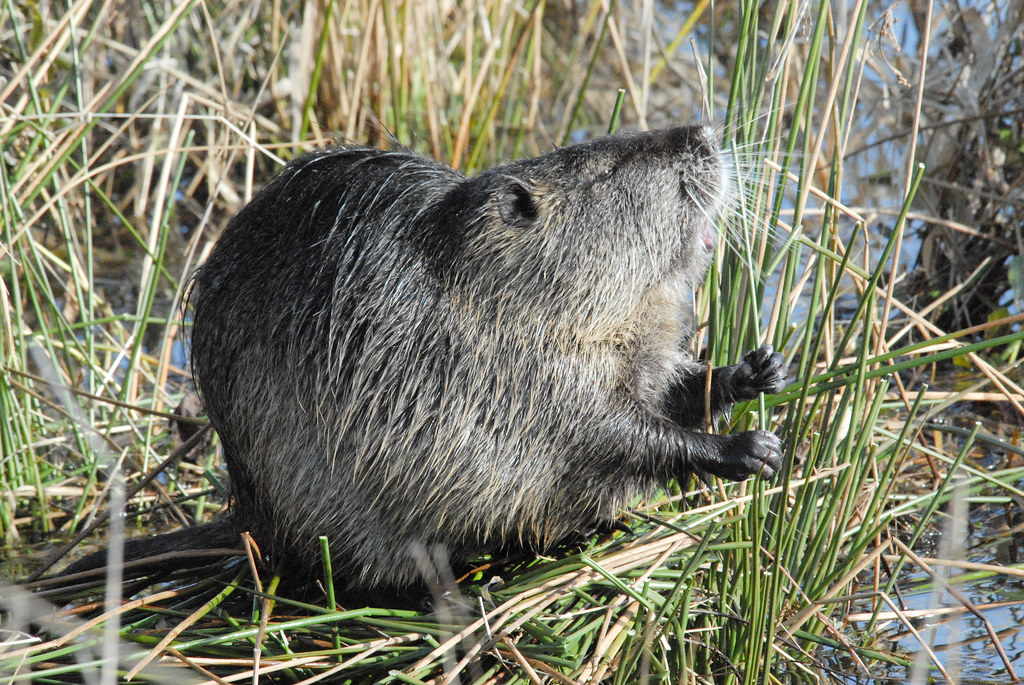 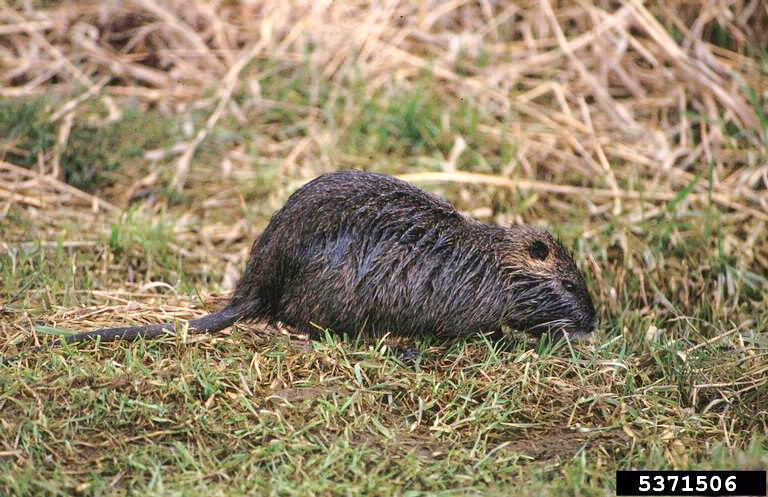 Nutria are large, brown, semi-aquatic rodents found in marshes, swamps and wetlands throughout the Delmarva Peninsula and other parts of the Chesapeake Bay watershed. (John and Karen Hollingsworth/U.S. Fish and Wildlife Service) 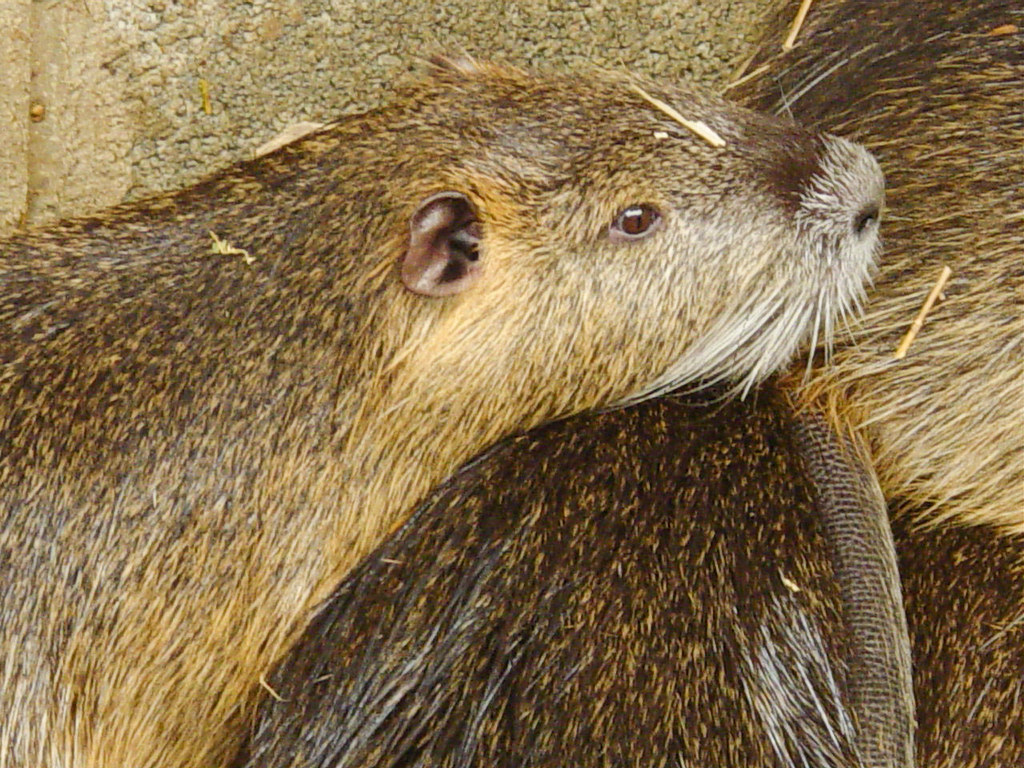 Nutria can be mistaken for muskrats and beavers. You can distinguish nutria from beavers by their rounded tails, and nutria from muskrats by their larger size. (Ben Fertig/IAN Image Library)

Nutria are large, brown, semi-aquatic rodents that live in marshes and wetlands on the Delmarva Peninsula and other parts of the Chesapeake Bay watershed. They are an invasive species.

The nutria has a dense, gray undercoat guarded by long, coarse hairs that vary in color from yellowish-brown to dark brown. It has large, bright orange front teeth and small eyes and ears that are located high on its head. It has short legs with large, webbed hind feet that can be nearly 6 inches long. Its thin tail can be 12 to 18 inches long. Nutria grow to 2 feet long and weigh 12 to 15 pounds, but can weigh as much as 20 pounds.

The nutria feeds on roots, rhizomes, tubers and young shoots of marsh plants such as cattails, saltmeadow cordgrass and Olney threesquare. It will also eat crops and lawn grasses near its marsh habitat. A voracious eater, it consumes approximately 25 percent of its body weight every day. It uses its large front teeth and powerful feet to dig into the marsh and feed on the root mat, causing significant erosion and damage to marshes.

No natural predators in the Chesapeake Bay watershed.

Nutria are social animals that can often be heard calling to each other in mooing or pig-like grunts. Their vocalizations are generally used to indicate feeding times or as a way to attract mates.

Reproduction peaks in late winter, early summer and mid-autumn. Highly prolific breeders, nutria produce 2 to 3 litters per year. Some nutria dig shallow dens into the mud of marsh banks. Dens have a nesting chamber inside. Female nutria are pregnant for 128 to 130 days. Each litter averages 4 to 5 young nutria, though some litters can have up to 13 young. Females can breed again within two days of giving birth. Young nutria mature quickly. They are able to swim and eat plant material one day after birth and can live on their own after just five days of nursing. Most young nutria continue to nurse for 7 to 8 weeks and remain with their mother for about 10 weeks. Nutria reach sexual maturity at 4 to 6 months old.