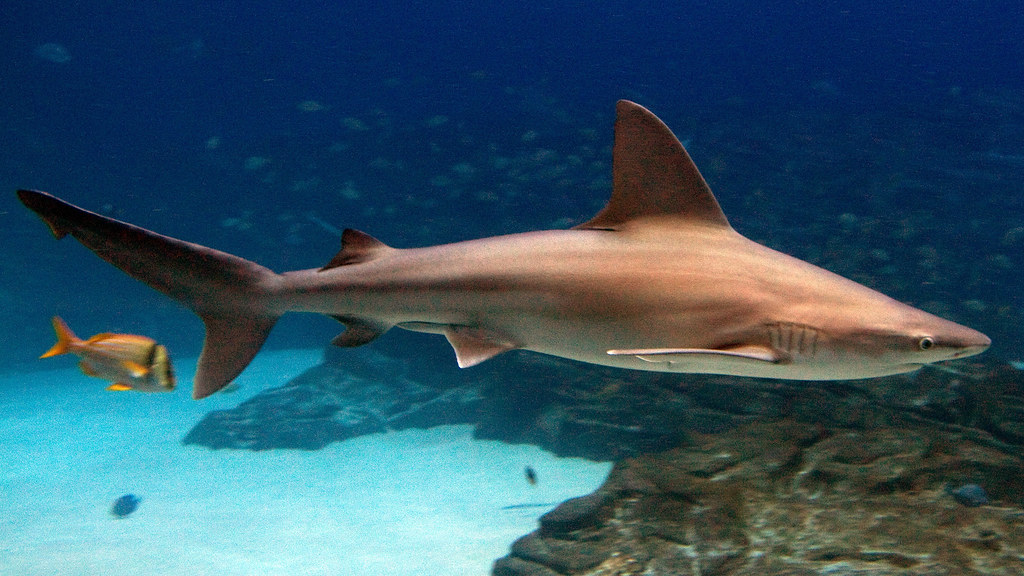 The sandbar shark is a classic-looking shark with a brownish or dark gray body, rounded snout, and tall, triangular first dorsal fin. Above, a sandbar shark at the Georgia Aquarium in Atlanta, Ga., in 2011. (Photo courtesy Brian Gratwicke/Wikimedia Commons)

A sandbar shark (Carcharhinus plumbeus) swims at the Virginia Living Museum in Newport News, Va., on Dec. 30, 2018. (Photo by Will Parson/Chesapeake Bay Program)]

Sandbar sharks have a rounded snout and saw-like teeth. Above, a sandbar shark swims at the Virginia Living Museum in Newport News, Va., on Dec. 30, 2018. (Photo by Will Parson/Chesapeake Bay Program)

Also known as the brown shark, the sandbar shark is a stocky shark that visits the grassy shallows of the lower and middle Chesapeake Bay in summer and autumn.

The sandbar shark has a brownish or dark gray body with a whitish belly. It has a rounded snout and triangular, saw-like teeth. It has a tall, triangular dorsal fin that increases its swimming stability, and a thick, narrow ridge of skin runs along its back between its two dorsal fins. Adults reach seven feet in length, but the juveniles that are found in the Chesapeake Bay are two to three feet long.

Adults have few predators. Juveniles may be preyed upon by bull sharks and other large sharks.

Females give birth every other year; they are pregnant for eight to 12 months before giving birth between June and August to eight to 10 live young. Juveniles remain in shallow waters until late autumn, when they form schools and move to warmer, southern waters. Males can live up to 15 years, while females can live as long as 21 years.