A Carolina chickadee brings a caterpillar to its nest hidden in a dead tree trunk in downtown Ellicott City, Md., on May 17, 2018. (Photo by Will Parson/Chesapeake Bay Program) 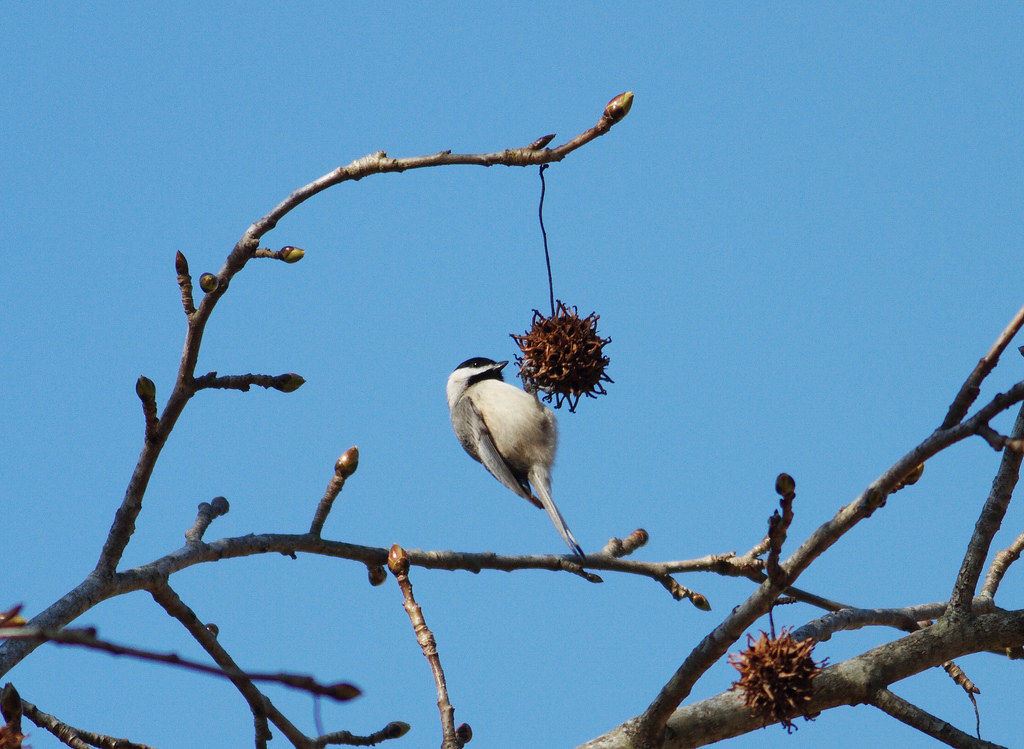 Chickadees are acrobatic while feeding. They hang upside down and tilt their head and body up to reach their food. (Tom Wicker/Flickr)

The Carolina chickadee is a small, plump songbird that lives in wooded areas, including parks and backyards, throughout the southern half of the Chesapeake Bay watershed.

The Carolina chickadee grows to about 4.5 inches in length. It has a small, plump body with a short neck and a large head. It has white cheeks; a short, dark bill; and a black "cap" and "bib." Its back, wings and tail are a dark gray color, while its belly is whitish, often with buff-colored sides.

The Carolina chickadee feeds mostly on insects and spiders, but will also eat seeds and berries, especially in winter. They can often be seen at bird feeders in winter. It is acrobatic while feeding: chickadees hang upside down and tilt their head and body up to reach insects on leaves and tree bark. In winter, they live in small flocks of 2 to 8 chickadees to create a feeding territory, which they will defend from other flocks.

Pairing begins in winter. Some pairs may only stay together for a single season, but it appears that most chickadee pairs mate for life. Pairs find or construct a cavity within a dead tree or tree limb. Then the female builds a nest of moss, feathers and plant detritus (dead organic material) in the cavity. Chickadees will also nest in bird houses. The female lays 3 to 10 eggs, which are incubated for about two weeks. Young fledge about 16 to 19 days after hatching, and become independent 2 to 3 weeks after fledging.