The common grass shrimp grows to 1.5 inches longs, with a nearly transparent body and a serrated "horn" over its eyes. (Photo courtesy Astro/iNaturalist CC BY-NC) 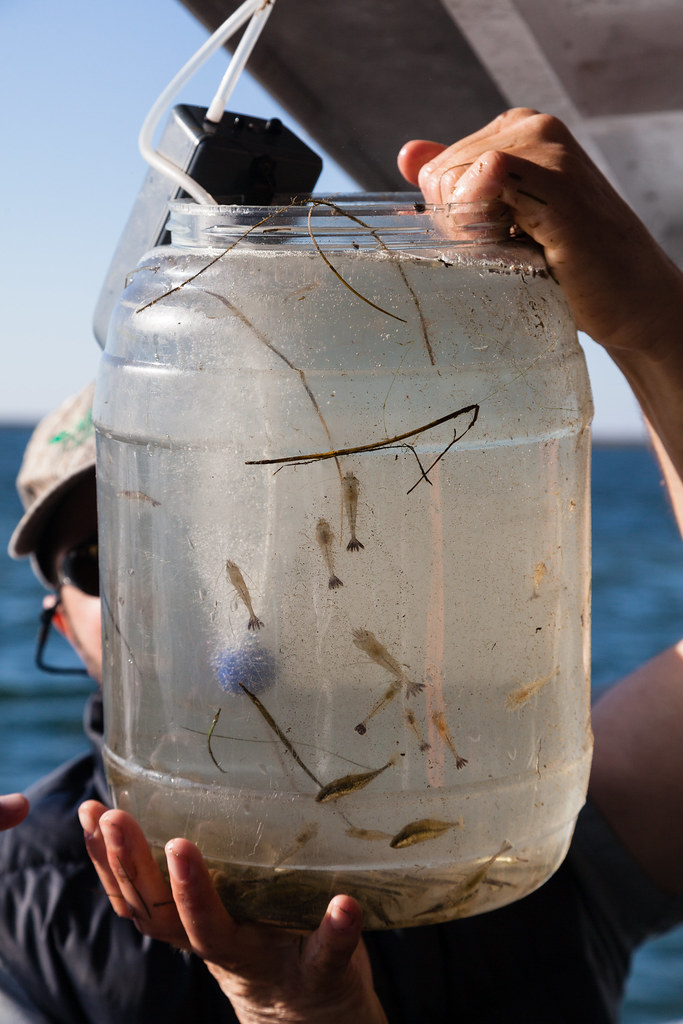 Fish and invertebrates such as grass shrimp caught by a crab scraper and oyster dredge are held in a jar of water onboard the Chesapeake Bay Foundation (CBF) vessel before being transferred to CBF's aquarium on Smith Island, Md., on Oct. 28, 2014. (Photo by Will Parson/Chesapeake Bay Program) USAGE REQUEST INFORMATION

A grass shrimp resides at the Virginia Living Museum in Newport News, Va., on Dec. 30, 2018. (Photo by Will Parson/Chesapeake Bay Program)

The common grass shrimp has a delicate, nearly transparent body with a distinctive serrated “horn” over the eyes. It lives in shallow waters throughout the Chesapeake Bay and its rivers.

The common grass shrimp has a segmented, nearly transparent body that is compressed on either side. It has a pointed, serrated “horn” that extends over its eyes. Its first two pairs of walking legs have claws. The shrimp grows to 1.5 inches in length.

Small fish such as sunfish and killifish feed on grass shrimp.

Usually spawns in summer, when water temperatures warm. Females must molt before mating. The female carries her eggs in a brood pouch, visible through the shrimp’s transparent body. Eggs hatch into free-swimming larvae after 12-20 days. Larvae go through several developmental phases over the first 1-2 months of life. Grass shrimp live approximately one year.