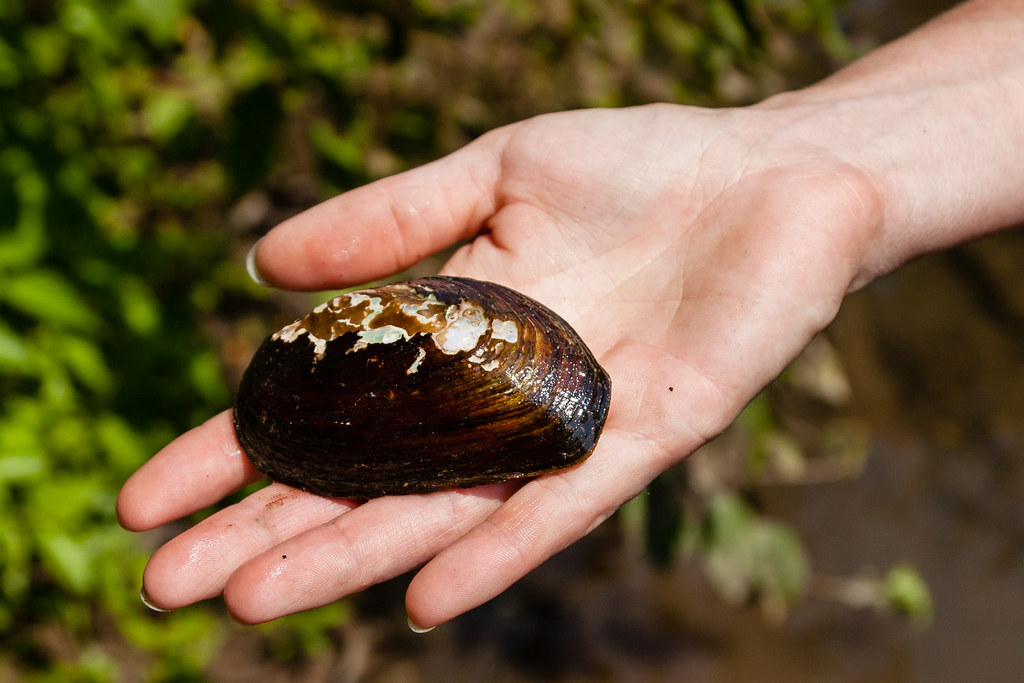 Julie Devers, a fisheries biologist with the U.S. Fish and Wildlife Service (USFWS), holds an Eastern elliptio, a species of freshwater mussel, in Buffalo Creek in Union County, Pa., on Aug. 21, 2013. Devers was part of a team of biologists that used electroshocking to capture 91 American eels in Buffalo Creek and fit them with pit tags for monitoring. The effort came four years after biologists began stocking Buffalo Creek, a tributary of the Susquehanna River, with eels. American eels are the main host for the Eastern elliptio, a freshwater mussel that began disappearing after the construction of Conowingo Dam on the lower Susquehanna River roughly a century ago blocked the migration of eels upstream. (Photo by Steve Droter/Chesapeake Bay Program)

The eastern elliptio is a freshwater mussel that can be found throughout the Chesapeake watershed.

The eastern elliptio is typically oval or trapezoidal with a brown or dark green shell. These mussels grow to four to five inches in length.

Mussels like the eastern elliptio are filter feeders. They take in water, trap any particles in a lining of mucus, then sort food particles and direct them toward the mouth. Food includes algae, bacteria and various plankton.

Mammals, like raccoons, otters, muskrats and minks, and some bird species prey on this mussel. Juveniles may also fall prey to certain fish.

Eastern elliptio mussels reproduce through open fertilization, in which the males release sperm into the water around them and the females take it in as they take in water. The eggs become fertilized and are brooded in the mussel’s water tubes, or marsupia, for up to a month while they develop into glochidia, the larval stage. The glochidia are released into the water, where they find a host fish and attach to their gills. Host fish species include American eel, yellow perch, brook trout, lake trout, mottled sculpin and slimy sculpin. Within a couple hours, the larvae are encapsulated by the host fish’s body. In the following days or weeks, the glochidia metamorphose into juvenile mussels, about the size of a grain of sand, at which point they fall of the host and attach to the substrate. Established eastern elliptio mussels can live for decades.