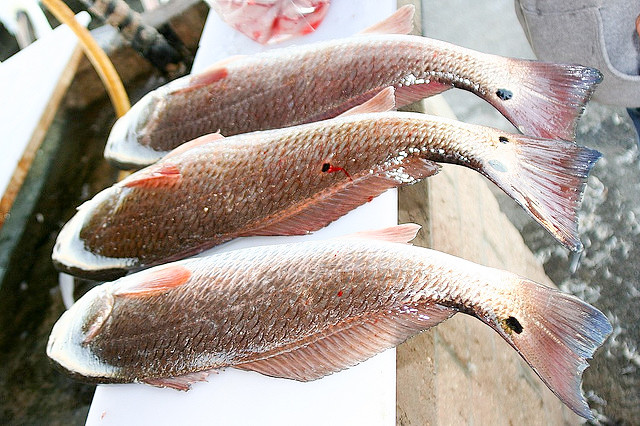 The red drum, also known as redfish and channel bass, is a popular sport fish. (Lance and Erin Willett/Flickr) 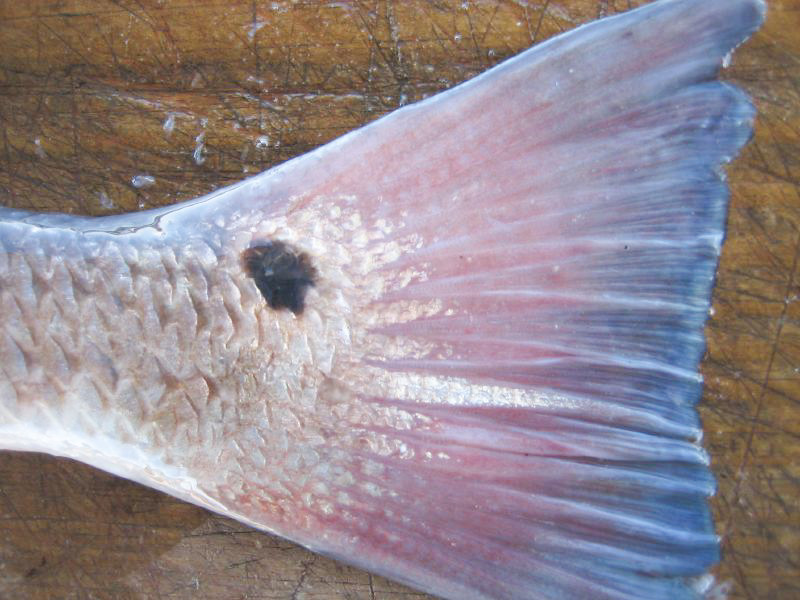 Red drums have one or more large, black spots at the base of the tail. Some scientists believe the purpose of the spot(s) is to mimic an eye, which fools predators into attacking the wrong end of the fish and gives the red drum a chance to escape. (Charles & Clint/Flickr)

The red drum is a large, reddish fish with at least one black spot at the base of the tail. It visits the lower Chesapeake Bay from spring through autumn.

The red drum has a silvery body with a reddish or copper tinge and a silvery-gray to white belly. Its scales have a dark center, forming poorly defined lines on its body. It usually grows 20 to 30 inches in length, but can grow as long as 5 feet and weigh as much as 90 pounds. One or more large, black spots appear at the base of its tail. Its tail fin is squared.

Red drum prey upon smaller fish such as anchovies and menhaden, as well as crabs and shrimp. Juveniles eat zooplankton and small invertebrates.

Spawns in late summer and autumn at night in coastal waters near the shore. Large females can produce two million eggs per season. After spawning, adults spend more time in the ocean and less time in the Bay. Fish under a year old appear in the Bay in August to September and move into shallow, fresher waters. Males mature at 1 to 2 years old, while females mature at 3 to 4 years old. Red drum live for 35 years on average; the oldest recorded red drum was 62 years old.