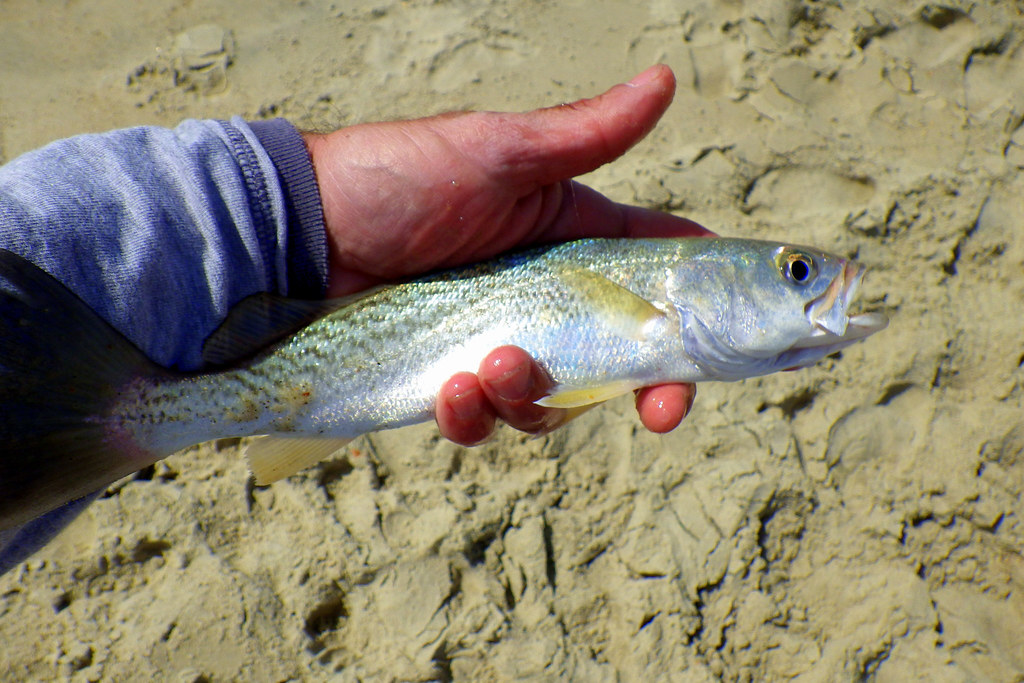 Weakfish have a dark, olive green back that fades to a silvery-white belly. The iridescent sides are covered with small, dark spots that form irregular diagonal lines. (Photo courtesy pmk00001/iNaturalist CC BY-NC)

The weakfish is a sleek, iridescent fish that visits the Chesapeake Bay’s shallow waters in spring and summer.

The weakfish's sleek body grows to 12 to 18 inches on average, but can grow to reach three feet in length and weigh anywhere from 6 to 18 pounds. It has a silvery-white belly and a dark, olive-green back with iridescent blue, copper or green on its sides. Small, dark spots on its back form irregular diagonal lines. Its fins are yellow, it has a deep notch in its dorsal fin and its tail fin is squared. It has two large canine teeth in its upper jaw.

Weakfish prey upon small schooling fish such as anchovies and menhaden, and will also eat crabs, shrimp, mollusks and large zooplankton. Once a weakfish sees its prey, it will slowly move toward it, then quickly lunge at it with open jaws. Weakfish are the top carnivore in the Bay’s eelgrass beds.

Other predatory fish (such as bluefish and striped bass), sharks (such as dusky sharks) and sea lampreys prey on weakfish.

The weakfish makes a drumming or purring sound.

Spawning occurs April through August near the shores of the Bay’s mouth. Females produce more eggs as they get larger. Larvae spend the late summer drifting through the lower Bay, eventually reaching their nursery areas in low-salinity rivers. Once they have grown to about 4.7 inches long, young begin to swim toward saltier waters, leaving the Bay by early winter. They reach maturity at 1 to 2 years old. Weakfish can live for 17 years, but most do not live past 9 to 12 years.